"The Seattle Education Association has reached a tentative contract agreement with the Seattle School Board, but the strike will continue until the SEA board and representative assembly review the agreement later today and decide whether to recommend approval to the SEA membership or continue striking. 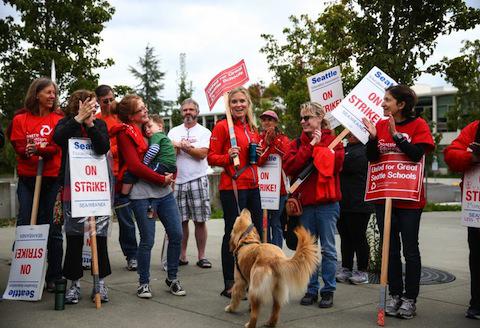 Striking teachers at Nathan Hale High School in Seattle reacted with satisfaction Tuesday, Sept. 15, 2015 when they learned a contract deal had been reached with Seattle Public Schools. Teachers began their strike on Sept. 9, the day classes were to begin, Joshua Trujillo/seattlepi.com

The deal was reached at 6:50 a.m. A vote to approve the contract may come Wednesday. And classes could begin on Thursday.

Details of the contract were not released. Negotiations centered on, among other issues, teacher pay, teacher evaluations and the teacher work day. Teachers wanted more money, and the district said it couldn't afford what teachers wanted.

Jonathan Knapp, president of the teachers union, said its board and later representative assembly will vote Tuesday on whether to suspend the strike. A suspension of the strike would send teachers back to work on Wednesday, and students to class on Thursday.

The district sent out a tweet early Tuesday afternoon that classes would begin Thursday, but a union spokesman called the tweet premature since the union hadn't suspended the strike.

A district official said teachers and the district "found common ground" to reach a deal.

"This is a great day," district spokeswoman Stacy Howard said. "This is good for our teachers and for our students."

"The Seattle Education Association has reached a tentative contract agreement with the Seattle School Board, but the strike will continue until the SEA board and representative assembly review the agreement later today and decide whether to recommend approval to the SEA membership or continue striking.

"SEA members should report to their picket locations today beginning at 8:30 am. SEA picket captains will provide more information to SEA members regarding next steps."

"My sincere thanks to both of the bargaining teams and our mediators for working through the night to reach an agreement," said Superintendent Larry Nyland said in statement. "This is great news for our 53,000 students. We are eager to open schools, welcome students and begin learning."

The agreement came after an all-night bargaining session. The strike began last Wednesday on the day classes were to begin.

After the tentative agreement was announced, parents and children rallied in support of teachers at Pioneer Square, then marched to school district headquarters in Sodo.

Seattle Mayor Ed Murray issued this statement: "This is welcome news for Seattle families and students. I'm glad both parties were able to come together to reach a tentative agreement this morning. As we anticipate the upcoming teachers vote, the City will continue operating drop-in activities for children until the school year begins."

After all-night talks, the Seattle teachers union and Seattle Public Schools have reached a tentative contract agreement that could end a weeklong strike.

The deal was reached at 6:50 a.m. Tuesday, according to the district.

"We are excited and pleased to let our 53,000 families know we have reached a tentative agreement," district spokeswoman Stacy Howard said.

A few hours later, the district announced that school will start Thursday, but that might be premature. The Seattle Education Association has yet to suspend the strike, saying it won't do so unless its board of directors and larger representative assembly both approve the agreement.

The two groups are scheduled to meet Tuesday afternoon.

Details of the deal will not be released until the union has a chance to share them with its members, the district said in a news release. If the contract is approved by the union's board and representative assembly, an all-union vote will likely occur this weekend, said Jonathan Knapp, the union's president.

Teachers still reported to picketing locations Tuesday morning, while about 500 union members, parents and students marched from Pioneer Square to district headquarters to celebrate the agreement.

Teachers and other school employees have been on strike since Wednesday, which led the district to close schools for its 53,000 students and forced parents to find care for their children.

The issues include pay, the length of the school day, the amount of student testing, and the caseload for psychologists and other specialists. The union represents instructional assistants, specialists and office secretaries as well as teachers. In total, it has 5,000 members.

Mayor Ed Murray said the city will continue to offer free drop-in activities for up to 3,000 children at its community centers until school starts.

"This is welcome news for Seattle families and students," Murray said in a statement. I'm glad both parties were able to come together to reach a tentative agreement this morning."

In announcing the tentative agreement, Ballard High School principal Keven Wyncoop asked that parents help students with the healing process after the strike.

"It's really important for our community to continue to come back together," Wyncoop said.