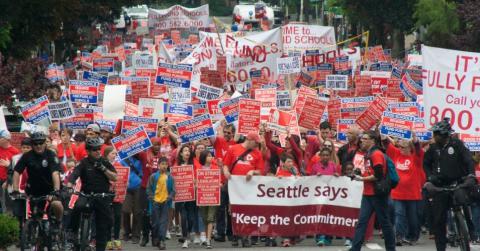 With schools set to open today, Seattle teachers and school employees are on strike, picketing at every school site across the district.

At issue are wages, concessions demanded by the district, such as lengthening the school day without compensation, and union proposals to guarantee recess and curb standardized testing.

The strike falls on the three-year anniversary of the Chicago teachers strike, which electrified teachers across the country in 2012. As in Chicago, the Seattle school board is seeking an injunction to get teachers back to work, in a school district that serves 53,000.

Last Thursday, members packed a 2,500-seat concert hall wearing red T-shirts, chanting, and voting unanimously to strike. The union, which represents 5,000 teachers, nurses, counselors, instructional assistants, office workers, and paraprofessionals, has vowed not to return to work without a settlement.

The Seattle Education Association (SEA) proposed 6 percent raises for each year of a three-year contract; the district countered with 13 percent over three years. “It’s insulting because we haven’t gotten a [Cost of Living Increase, COLA] in six years,” said substitute teacher Dan Troccoli. In Washington, the state legislature determines the base teacher salary, but districts can supplement it in negotiations. SEA members want the district to make up for years of the state’s underfunding of teacher pay.

Union members also want the district to address caseloads for nurses and counselors.

“We need caseload caps,” Troccoli said. “Some of these folks are high school counselors with 400 students. Last time we negotiated they said they would work on it. ”

Another proposal from Seattle teachers is for “racial equity teams”—teams of teachers in each school building who would plan how to address the disproportionate discipline of students of color. Thus far, the district has only agreed to fund these teams in a few schools.

The union also wants to delink teacher evaluation and student performance, which is calculated in part by standardized test results. Seattle’s evaluation system, previously agreed upon with the district, already factors in student growth, including test scores, which many teachers say is arbitrary and unfair. Washington, unlike many other states, has so far avoided a statewide mandate to include student performance and test scores in teacher evaluation, making Seattle an outlier.

Seattle teachers have not struck the district in 30 years, since a five-week strike in 1985. They did strike for one day in May, but it was aimed at the state government.

The May 19 strike was part of a wave of one-day strikes by teachers in 65 districts across Washington to protest the state’s refusal to fund public schools, funding that could have reduced class sizes.

In 2012, the state Supreme Court found the legislature was violating the state constitution by refusing to adequately fund education. On August 13, the court announced that until the legislature complies, it would begin imposing fines of $100,000 a day. The money is to be held in an account dedicated to education. In past years the legislature had cut funding despite obligations to increase it.

The one-day strike offered Seattle teachers a dry run as union members were starting their contract campaign. “It trained people who had never struck, how to do that stuff, what it’s like to walk the line,” Troccoli said. The district, in part willing to allow the teacher protest over much-needed state funding, closed school for the day. Teachers picketed at high schools and then marched downtown, where they were joined by other districts in a crowd of 5,000.

In negotiations last weekend, the two sides agreed to increase pay for substitute teachers and to guarantee 30 minutes of recess for all schools. Troccoli said the union’s initial proposal of a guaranteed 45 minutes of recess was in concert with parent protests that schools have been cutting into students’ free time to make way for test prep. Teachers and parents say this disproportionately impacted schools with low-income students of color.

A study by University of Washington researchers found Seattle students had 12 minutes on average of seated lunchtime, and that no school had as much as 20 minutes. “It’s crazy: you either have kids who are foregoing lunch to run around outside or they are just staying in the lunch room,” Troccoli said. “It’s problematic on both sides.”

Teachers in Pasco, in the southeast part of the state, and Whidbey Island, north of Seattle, are also on strike, while Washington’s second largest district, Spokane, narrowly avoided a strike with a deal made Friday.

Teachers have worked to build relationships with community groups. The movement to opt out of standardized tests made allies between teachers, the Seattle NAACP chapter, and parent groups such as Parents Across America.

Seattle's Garfield High teachers won national attention three years ago when they boycotted a mandatory exam, causing the district to make it optional.

Seattle parent Ljiljana Stanojević-Peñuela has been organizing parent strike support through the Facebook group Soup for Teachers. She started to support and “nourish” teachers during the preparation for the strike. In less than a week the group grew to 1,300 members.

Stanojević-Peñuela is a PTA member who brought a group of parents to last night’s school board meeting, where the board voted to take legal action to end the strike rather than come to a settlement. She said the board was not transparent with parents or the public, and that it was clear board members weren’t bargaining in good faith.

Stanojević-Peñuela said she supports the union’s fight to protect recess, along with its wage proposals. “Is it fair? Yes,” she said, pointing to Seattle’s development boom and rising rents. “It’s harder to live in Seattle on a teacher’s salary.”

“I’ve tried as a parent to call the district,” she said. “They are not responding. Meanwhile, we do get to talk to the teachers all the time.”

Her group plans to bring food, including soup, to locations near each school, working with rank-and-file strike captains. “This is a completely parent-run thing—our goal is to cover everybody,” Stanojević-Peñuela said.

After getting nowhere in last minute negotiations on Tuesday, Troccoli said members are angry. “Our resolve is pretty strong,” he said. “People are fed up.”

“The district's proposals on pay are outright disrespectful. Two percent for one year? That doesn’t even begin to touch what we are asking for.”

As for the threat of legal action, Troccoli said teachers aren’t concerned that will block the strike: “We won’t be cowed like that.”