The Art of the Black Lives Matter Movement 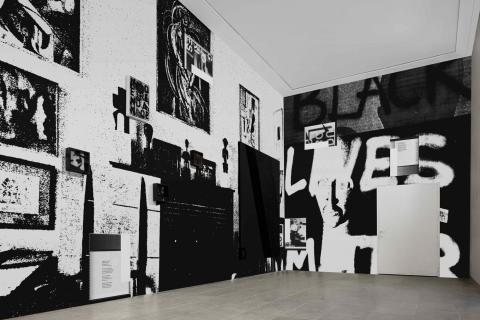 "Where were the conceptual artists when the hoses were being turned on people in Birmingham in the 60s?" asks artist Adam Pendleton from his Manhattan studio. This thought led Pendleton to create the multimedia installation of paintings on canvas and large-scale vinyl works that repeated the phrase "Black Lives Matter" all over the walls of the Belgian Pavilion at the 56th annual Venice Biennale. "I began by writing the language in very discreet ways on pieces of paper in my studio," explains the artist. "I was trying to see how this movement could exist within my work."Since the start of the internet-driven #BlackLivesMatter movement in 2012, following the shooting of 17-year-old Trayvon Martin and amplified by innumerable incidents since, artists like Pendleton have sought to represent its issues visually and conceptually—from police brutality to structural inequality to trans violence.

The Black Lives Matter website states: "Every 28 hours a black man, woman, or child is murdered by police or vigilante law enforcement in America." It's a reality that has pulled the #BlackLivesMatter movement from social media to the streets. It is also what has motivated a multitude of artists to integrate themes of social justice directly relating to Black Lives Matter into their work.

Take the artist Titus Kaphar, who used chalk to sketch the faces of Trayvon Martin, Amadou Diallo, Sean Bell, and Michael Brown on asphalt. In the drawing titled For Trayvon, Amadou, Sean, and Mike, Kaphar overlays these unarmed black boys and men's faces, one on top of the other, to visually represent the present day and historical nature of police brutality.

"The stories of black women, trans and non-trans women, need to be centred in the narrative of this fight for Black Lives Matter," says Kaba. "Even the fact the hashtag was started by three black women, says that by nature, this movement is one that was intended to be intersectional," she explains to me. "Our exhibit is one intervention to get people to understand that all black lives matter."

It is a point visual artist Rashaad Newsome made when he commissioned protesters to storm the stage of the opening of the 'Killer Heels' exhibition at the Brooklyn Museum. One protester held up a sign that read "R.I.P. Islan Nettles". Nettles was a 21-year-old black trans woman who was fatally beaten by a group of men while walking down the street with friends in New York City. The moment brought attention to the troubling reality that trans black women represent 72% of LGBTQ homicide victims. "I created the work because I wanted Islan Nettles to be remembered and her story to be heard," Newsome told me after the performance.

Artists are also making work that explores the range of black experience, addressing the stereotypes that often lead to violence against black Americans. "When Trayvon Martin passed, I had a phone conversation with my twin brother that ignited my urgency to create a body of work that would address the complexities, humanity, and vulnerability of the black men I had known and loved my entire life," says painter Jordan Casteel. "From that moment on, I dedicated my time to working towards building the Visible Man portrait series." In the 12 portraits that she created, Casteel asked black men to show her a place where they felt safe and she painted them in the nude.

Shikeith Cathey's 45-minute film, #BlackManDream, explores similar themes to Casteel's portraiture. Cathey asks black men (some nude, some not) questions like, "When did you become a black man?," and "What makes you happy?" "This is a work that aims to destroy the racist, colonial fantasy that murdered Trayvon Martin, which many black males have adapted into our own cultural ideals of what a black male should be," Cathey explains. "#Blackmendream provides the space for the black male to journey towards seeing himself, as himself, without the apprehension to be himself."

Photographer Ervin Johnson's #InHonor wheat paste campaign uses the frustrations articulated by the movement as a point of departure.The Chicago-based photographer says he used a "mixed-media photo technique to exert physical force", violently marking up portraits of his friends' faces. The black figures in Johnson's portrait series--with their eyes wide open, and faces scared--appear dead. "I want the viewer to consider the fate of these black lives and question what separates them from any of those who have already died," says Johnson.

Adam Pendleton explains why it's so important for artists to interpret the Black Lives Matter movement: "Art is not news. Art has a very long arc in our cultural and social spaces, it creates images that we return to. The very visual presence of Black Lives Matter has facilitated conversations that I would not have had, if I had not brought the language into the space of my work. It's a long-term process."It's clear that artists have helped to encapsulate and even advance the Black Lives Matter movement, through work that responds to its contemporary race issues. Through painting, drawing, film, conceptual pieces, and the mere act of creation itself, makers and curators have driven home the message that black lives more than matter.

Go to i-D to see images of art work, courtesy of the artists.

i-D has built its reputation on being a consistent source of inspiration in fashion culture. It began as a fanzine dedicated to the street style of punk-era London in 1980, and quickly earned its position at the vanguard of fashion and style, abiding by the premise of originate – don’t imitate. i-D has come a long way since its pre-digital, cut-and-paste days and has developed into a glossy magazine that documents fashion and contemporary culture, and has broken ground defining it too. Constantly reinventing itself, as with our website, i-D continues to encourage creativity, which is why after more than 30 years, its editorial content still manages to surprise and inspire.