On Wednesday, John Hopkins Medicine in Baltimore quietly announced it had discontinued its program that focuses on Black Lung Disease. The controversial program had been suspended in 2013, two days after a joint investigation by the Center for Public Integrity and ABC News revealed how physicians at the nationally recognized university hospital had routinely helped the coal companies reject the legitimate disability claims of more than 1,000 sick miners. 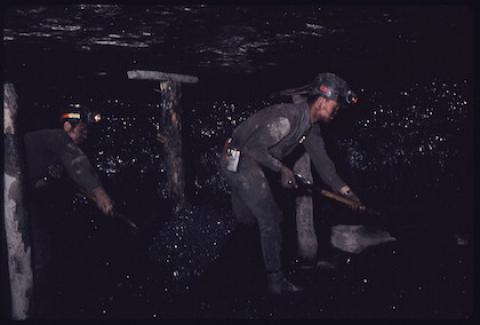 Two miners cleaning out loose coal by hand in a coal mine near Richlands, Virginia., Jack Corn/U.S. National Archives

Johns Hopkins Medicine said Wednesday that it has discontinued its black lung program, the subject of a Center for Public Integrity-ABC News investigation that showed how coal companies routinely beat back sick coal miners’ disability claims with help from doctors at the nationally recognized hospital.

Johns Hopkins initially suspended the program, a move that came two days after the 2013 series ran.

“The program has been suspended since November 1, 2013 and, following a thorough review, will not be resumed,” Jania Matthews, a Johns Hopkins Medicine spokeswoman, said in an emailed response to a Center query.

It’s unclear when or why the decision to end the program was made. Matthews did not respond Wednesday to a request for more details.

Miners diagnosed with black lung — an incurable and potentially fatal disease triggered by breathing coal dust — can apply for benefits and medical care through a federal program. But the coal companies liable for those payments, aided by doctors and lawyers, have pushed back to get claims denied, the Center and ABC News found.

The series, “Breathless and Burdened,” which won a Pulitzer Prize for investigative reporting, prompted policy changes by the U.S. Department of Labor and a pending proposal from members of Congress for what they called “sweeping reforms” of the benefits program.

Dr. Paul Wheeler, who headed the Johns Hopkins unit, has retired, Matthews said. Wheeler did not find a single case of severe black lung in the more than 1,500 cases decided since 2000 in which he offered an opinion, a review by the Center and ABC News found. Such a  finding would automatically qualify a miner for benefits.

Last year, the Department of Labor told approximately 1,100 coal miners that their black lung benefit claims may have been wrongly denied as a result of Wheeler’s readings of their X rays.

[Jamie Smith Hopkins is a reporter for the Center for Public Integrity.]