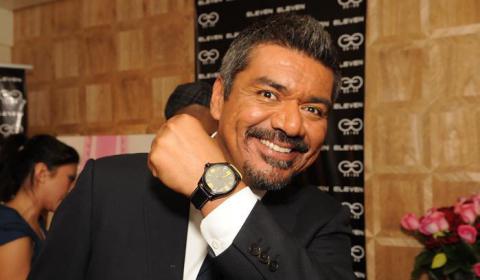 George Lopez, Hollywood Branded/Flickr
Latino groups are turning up the volume on efforts to get NBC's Saturday Night Live to drop Donald Trump as the scheduled host Nov. 7.
The National Hispanic Leadership Agenda, an umbrella group representing 40 of the largest Latino organizations in the nation, including the National Council of La Raza (NCLR), the Mexican American Legal Defense & Educational Fund (MALDEF) and the L.A.-based National Hispanic Media Coalition (NHMC), is preparing to send a letter to NBC today urging the network to reconsider the controversial booking, according to multiple people involved with the nonprofit.
In the meantime, Alex Nogales, president of the NHMC, told us he's trying to get longtime SNL producer Lorne Michaels on the phone in order to express the Latino community's frustration over the Trump booking. "They told me he was not going to talk," Nogales said.
Many Latinos were insulted when the leading Republican presidential candidate said in June that Mexican immigrants are criminals and rapists. Soon after, NBC said in a statement that it was "ending its business relationship with Mr. Trump."
"At NBC, respect and dignity for all people are cornerstones of our values," the network said.
Trump's announced appearance on the network's beloved comedy-sketch showcase, then, shocked some Latino leaders. "This is a bit of a kick in the teeth for us," said NCLR spokeswoman Lisa Navarrete.
"He's only gotten more divisive and anti-Latino" since June, she said.
A MoveOn petition is urging the network to drop Trump from Saturday Night Live. It was started by Tallahassee, Florida's Juan Escalante, a Venezuelan immigrant who was brought here illegally and who now enjoys protection under President Obama's 2012 Deferred Action for Childhood Arrivals program.
"It's hypocritical of them to go back and put Donald Trump on as the face of the program, given that NBC said it would terminate its relationship with Trump over his comments about Mexican immigrants," Escalante said. "I think it's embarrassing for the network to do this. It tells me they don't really care about Latinos and that they'll do anything to get ratings."
There's been some speculation that SNL honcho Michaels has carte blanche when it comes to programming the show, which would explain how Trump has been booked despite NBC's own cessation of business ties with the real estate mogul.
"[Michaels] doesn't take orders from anybody," Navarrete says.
Some Latino groups hope to use the occasion to pressure SNL to hire more Latinos.
"It's outrageous that Lorne Michaels hasn't given the Latino community the dignity we deserve," said Matt Nelson, managing director of Latino social justice group Presente.org. "This is not going away."
As we reported yesterday, only two cast members in 41 seasons have been Latino. Only 11 hosts or fewer, depending on how you define their ethnicity, have been Latino. Nearly one in five people in New York is Latino, which is now America's largest minority. Only one Asian-American, Rob Schneider, has been on the cast.
In 2013 the show took heat for its lack of African-American women on-air, and since then it has hired two, Sasheer Zamata and Leslie Jones, the latter of whom was employed after Chris Rock asked Michaels to give her a shot.
There's a feeling among some Latino leaders that the Trump controversy could be a teachable moment for SNL, or at least an opportunity to shame Michaels into further diversifying his staff.
Navarrete of the NCLR says the group supported efforts in 2013 to get SNL to hire African-American women. Now, she says, it's time for the show to face its Latino deficit, including the astonishing statistic that no Latinas have ever been in its cast.
"The African-American community did really good work and made a big difference with the show," Navarrete said. "There's no reason why we can't do the same when it comes to our community. Maybe we can get an Asian hired while we're at it, too."
She noted that Michaels and his production company, Broadway Video, are big Hollywood players, churning out comedy films and TV shows that are often taped in Los Angeles. He also plucks a lot of SNL talent from Hollywood, including from the Groundlings comedy troupe.
She wondered if Michaels traveled through Los Angeles "with blinders on," because the town is "50 percent Latino."
We reached out to Broadway Video and got a "no comment." Likewise, a spokeswoman for NBC said, "We are not commenting." We also reached out to comedian George Lopez, noting that he's part of a group of high-profile Latino comedians, including Cheech Marin and Paul Rodriguez, who have never hosted SNL. A publicist for Lopez said, "George will have to pass" on our offer to have him weigh in.
But he did retweet this comment: "Hey, Lorne! Why don't you #DumpTrump and give us @georgelopez!"
email Dennis Romero  @dennisjromero
Subscribe to Portside