Hillary Clinton’s endorsement Friday by the country’s largest public employee union marks a turning point in her nomination battle as she shores up support from a labor movement that flirted in recent months with Bernie Sanders and Joe Biden. 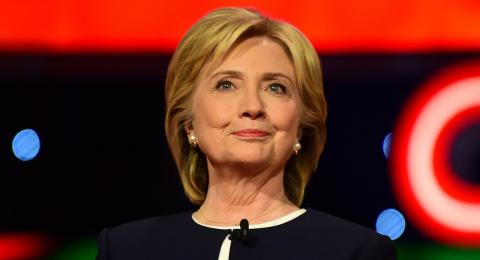 AFSCME has been leaning pro-Clinton for some time., Getty
Hillary Clinton’s endorsement Friday by the country’s largest public employee union marks a turning point in her nomination battle as she shores up support from a labor movement that flirted in recent months with Bernie Sanders and Joe Biden.
The endorsement, by the 1.3 million-member American Federation of State, County and Municipal Employees, enables Clinton to claim support from groups representing the majority of the nation’s 14.6 million union members.
Sanders, by contrast, has been endorsed by only one national union — the 185,000-member National Nurses United — even though the Vermont senator is much more closely identified with organized labor.
“I am not aware," Sanders told reporters at the AFL-CIO Executive Council meeting in July, "that there is anybody in the House and Senate who has a stronger voting record for the AFL-CIO during that period, 98 percent.”
Clinton’s endorsements from AFSCME, the American Federation of Teachers, and the National Education Association alone represent nearly 6 million workers. Add in the seven other national unions supporting her and the total rises to about 7.5 million.
Those other unions are: the International Association of Machinists and Aerospace Workers; the United Brotherhood of Carpenters and Joiners of America; the Operative Plasterers’ and Cement Masons’ International Association; the Union of Painters & Allied Trades; the United Union of Roofers, Waterproofers and Allied Workers; the International Union of Bricklayers and Allied Craftworkers; and the United Association of Journeymen and Apprentices of the Plumbing, Pipefitting and Sprinkler Fitting Industry.
Even before the AFSCME endorsement, Clinton enjoyed support from unions representing about half of all union members, giving the lie to predictions that Biden would enter the race with strong labor support. In fact, Biden could count on support only from the International Association of Fire Fighters (300,000 members) and perhaps the United Steelworkers (1.2 million) — a likely consideration in his decision not to run.
AFSCME has been leaning pro-Clinton for some time, and it said Friday that two-thirds of its polled members opted for Clinton. But it had held off on its endorsement to see whether Biden would enter the race. A prospective Biden bid may also have delayed the two million member Service Employees International Union, thought likely to endorse Clinton soon as well. The Teamsters and IAFF aren’t expected to endorse until the winter or spring.
Labor’s shift into Clinton’s corner began July 11 when the American Federation of Teachers endorsed her. AFT President Randi Weingarten has long been close to Clinton and sits on the board of the Clinton super PAC Priorities USA Action. As a U.S. senator for New York, Clinton was a reliable labor ally, co-sponsoring, for instance, the pro-labor Employee Free Choice Act (‘card check”), which cleared the House in 2007, 241-185, but was filibustered in the Senate.
“I am proud to stand with public sector workers at the federal, state, county and municipal levels of government,” Clinton said in a statement. “They make this country work. Together with the men and women of AFSCME, I know that we can continue making progress and build a better future for working families across America.”
But Clinton’s ties to President Barack Obama’s Trans-Pacific Partnership and her centrist Democratic roots drew suspicions from labor’s rank and file. Clinton’s recent decisions to oppose TPP and the “Cadillac tax” on generous health plans were likely motivated at least in part by a need to enhance her pro-labor credentials. But another recent decision — to oppose the Keystone XL pipeline — hurt her with the Teamsters and LiUNA, which issued a statement saying there would “be pause and consternation at the ballot box” after Clinton’s decision.
Sanders rode a wave of grassroots support this summer, posing an unexpected but credible challenge to Clinton. Rank-and-file union members played no small role in the Sanders surge, with thousands forming Labor for Bernie, a grassroots advocacy group designed in part to pressure Washington labor leaders to hold off on a Clinton endorsement.
National endorsements for Clinton were accompanied by protests from rank-and-filers who still preferred Sanders. State-level AFL-CIO chapters in South Carolina and Vermont also backed Sanders, prompting AFL-CIO president Richard Trumka to remind them that regional endorsements were forbidden under the labor federation’s bylaws.
As recently as Friday morning, Labor for Bernie sent a letter to AFSCME leadership asking it to hold off in the name of union democracy. "The decision on which candidate AFSCME supports will be one of the most important political decisions our organization makes, the letter said. “It's important that the decision be made democratically and that our members are actively engaged in the process. A top down decision will send the wrong message to our members.”
But union leaders have been hesitant to come out for Sanders, in all likelihood because they have much more to lose from a GOP victory than to gain from any one Democratic candidate as opposed to another. The GOP-controlled Congress has moved to reverse pro-union decisions by the National Labor Relations Board and a proposed Labor Department regulation expanding eligibility for overtime pay, blocked only by the threat of a presidential veto. Republican-controlled state legislatures have brought the number of so-called right-to-work laws, which free workers from any legal obligation to pay dues or their equivalent to unions that bargain collectively on their behalf, to 25.
The union movement is strongest in the public sector, where 35 percent of workers belong to unions like AFSCME. But the Republican-majority Supreme Court may deal public employee unions a major financial blow this term in Friedrichs v. California Teachers Association, whose plaintiffs seek to eliminate union fees paid by non-members.
AFSCME said Clinton’s electability was a key factor in its endorsement “AFSCME members want the candidate who will be the most effective champion for working families," AFSCME President Lee Saunders said, "and who will be able to deliver a victory in this critically important election.”
Read more: http://www.politico.com/story/2015/10/hillary-clinton-labor-majority-21…
Subscribe to Portside