An interesting article from The Wall Street Journal describing the current crisis of parliamentary democracy in Portugal in which the left coalition was not allowed to form a government, but the pro Eurozone forces will not be able to govern. 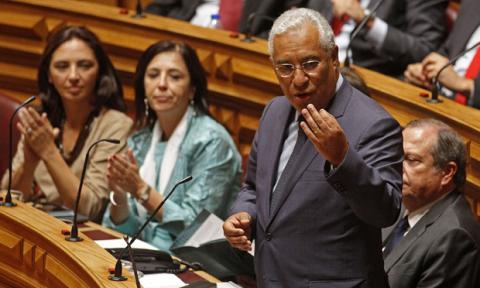 A decision by Portugal’s president to ask a fellow center-right politician to form a minority government after elections this month—rather than turning to a left-wing option that includes two euroskeptic parties—has sparked a new debate about democracy in the eurozone.

Similar questions were posed earlier this year when Greece had to swallow the tough terms of a eurozone bailout even after the election victory of Prime Minister Alexis Tsipras’s antiausterity Syriza movement—and an earlier referendum that had rejected the bailout terms.

In doing so, he followed Portuguese precedent in which the leader of the party winning the most seats in parliament is asked to form a government, even a minority one.

But his decision and his criticism of the opposing parties was condemned by left-wingers across Europe—and seized upon by right-wing opponents of the European Union in the U.K., who claimed democracy had been subverted. The hashtag #PortugalCoup was popular on Twitter.

“You can have democracy, or you can have a political union in the EU. You can’t have both. #PortugalCoup #ThisIsACoup,” tweeted Daniel Hannan, a British Conservative Party euroskeptic in the European Parliament. Stewart Wood, a pro-EU Labour Party member of the U.K. House of Lords, tweeted: “Message from Portugal’s President: ‘You can have democracy or the EU, but not both.’ Bad for the pro-European cause.”

Mr. Cavaco Silva’s sharp words against the bid by Socialist Party leader Antonio Costa to lead a leftist government has sparked a wider debate across Europe, given that he suggested he won’t allow the far-left parties to be part of any governing solution.

“Never in 40 years of democracy have the governments in Portugal relied on the support of anti-European political forces,” the president said.

The maneuvering is being watched very closely in neighboring Spain, where another conservative government that, like Portugal’s, followed Brussels’ austerity recipe faces a tough election on Dec. 20.

Mr. Passos Coelho’s governing coalition—which joins his Social Democratic Party with the smaller Democratic and Social Center Party—won 107 of the 230 seats in Parliament. Mr. Costa’s Socialist party, which promised to ease some belt-tightening measures but to stick to EU standards of fiscal restraint, won 86 seats.

The Left Bloc, an ally of Greece’s ruling Syriza party that favors restructuring Portugal’s debt and an open discussion about the country’s future in the euro, won 19 seats, followed by a coalition of the Communists, who advocate ditching the euro right away, and Greens, with 17 seats.

In Portugal, parties on the left have traditionally disagreed on key issues, and many Portuguese doubted they could ever unite. They were still working on an agreement under which the Socialists would form a minority government with parliamentary support of the two smaller parties when the president announced his decision.

Both the Communist and Left Bloc, Mr. Cavaco Silva noted, also have called for dissolving the North Atlantic Treaty Organization, of which Portugal is a founding member.

The Socialist Party grouping in the European Parliament issued a statement backing Mr. Costa and said: “Portuguese voters were very clear in the last general election with a strong majority (62%) against the austerity policies of the last four years.”

Center-right politicians echoed Mr. Cavaco Silva’s concerns. “The sacrifices made by the people of Portugal must not be jeopardized by a government composed of anti-EU and anti-NATO parties,” said Joseph Daul, president of the center-right grouping in the European Parliament.

On Thursday, he went further, sounding an alarm that “coalitions of losers want to join forces to do away with moderate majorities in our societies, to attain through deals what they didn’t achieve at the ballot box.”

Since taking office in late 2011 with Spain on the brink of default, Mr. Rajoy has used austerity policies and a loosening of labor market rules, along with a cyclical bounce, to turn it into the eurozone’s fastest-growing major economy. Nevertheless, the recovery is still fragile and the benefits haven’t been felt by all. Unemployment remains stuck above 20%.

A recent poll by the Metroscopia agency showed Mr. Rajoy’s Popular Party in a virtual dead heat with the rival Socialist Party, in a landscape convulsed by the emergence of two upstart parties, Ciudadanos of the center-right and Podemos of the far left.

Spanish analysts were betting that the center-right Portuguese government wouldn’t last long, but didn’t necessarily think a leftist government in Lisbon would produce a catastrophe.

The Portuguese leftist parties “are going to topple” the government of Mr. Passos Coelho, said Robert Tornabell, an economist at the ESADE business school in Barcelona. He said that would likely lead to new elections, after six months, and a leftist win.

But he expected the Portuguese left to govern less radically than its rhetoric might suggest. “Outside of the euro lies misery,” he said.