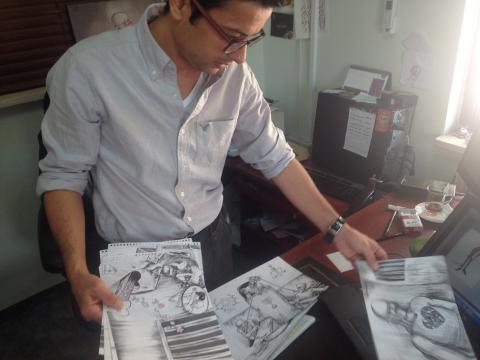 Cartoonist Mohammad Sabaaneh, at his university office in Ramallah, looks at drawings he made of prison life in 2013., William Booth/The Washington Post

RAMALLAH, West Bank — He is one of the most popular Palestinian cartoonists working today. Israel’s media watchdogs say he promotes violence and demonizes Jews. He says that if his critics don’t like what they see in his mirror, they should end the military occupation and give him a state.

Mohammad Sabaaneh is a skinny, kinetic, bespectacled 36-year-old who likes to smoke cigarettes and draw. He is getting his master’s degree in conflict resolution. He spent five months in an Israeli prison.

He is also the principal cartoonist for Al-Hayat al-Jadida, the Palestinian Authority’s daily newspaper, and so his work parallels the official line of the government of President Mahmoud Abbas and his political party, Fatah.

This means that Sabaaneh’s mordant cartoons celebrate what Palestinians call “popular resistance” — rock-throwing against Israeli forces — but do not glorify knife attacks against civilians. Nor does his work suggest that stabbing Jews — even an 80-year-old woman, as happened Monday in Tel Aviv — is wrong.

“Look, we’ve tried all the alternatives. Nothing is working,” he said. “So what you call violence, we call resistance.” Panels by cartoonist Mohammad Sabaaneh depicting a Palestinian disarming an Israeli soldier then returning the blade. The artist says the work explores questions such as: “Who is the terrorist?” Sabaaneh’s critics say his work stokes hatred and violence. (Courtesy of Mohammad Sabaaneh)

The cartoonist says his work reflects a harsh reality.

His caricatures are not subtle.

Israeli soldiers are depicted as goons.

Palestinian kids are often shown as rebellious scamps, as if drawn from the pages of “Dora the Explorer,” firing their slingshots at colonialist oppressors.

It probably comes as no surprise that Jewish Israelis and Sabaaneh’s Palestinian audience can look at the same cartoon and see very different things.

The surge in knife, gun, stone and vehicular attacks by Palestinians and lethal countermeasures by Israeli forces against assailants and at violent demonstrations have left scores of dead and wounded.

Eleven Israelis have been killed. According to the Palestinian Ministry of Health, more than 70 Palestinians have been shot and killed during attacks and demonstrations.

Israeli Prime Minister Benjamin Netanyahu blames the Palestinian leadership and official media for fanning the flames, specifically with their charges that the holy site of the al-Aqsa Mosque is threatened by Israel and that Israel is executing innocent Palestinians in cold blood.

Sabaaneh’s cartoons closely follow the day’s events, and they are frequently criticized by Palestinian Media Watch, which documents cases of alleged incitement and consults closely with the Israeli government, including Netanyahu.

“I don’t even like the term ‘incitement’ anymore. It is becoming a meaningless word,” Marcus said. “The messages are simple. Demonization. Hatred. Evil.”

He pointed to a Sabaaneh cartoon that shows an ultra-Orthodox Jew with side curls squeezing the trigger of an Israeli soldier’s gun to kill a Palestinian.

Sabaaneh objects. It is Israel that creates these images, he said — no Palestinian teenager needs to look at newspaper cartoons to get angry. “It’s on the news,” he said. Israeli soldiers shoot innocent Palestinians all the time, he said.

Sabaaneh said he doesn’t present Jews as evil — he presents the Israeli military occupation as evil.

When he draws a man with a kippah, or yarmulke, riding an Israeli soldier like a donkey, dangling a knife in front of him like a carrot and stick, to assault a Palestinian, Sabaaneh said, the Jew is not any Jew but a radical Jewish settler living in the West Bank on land the Palestinians want for a future state.

“They say this is anti-Semitism. How can you tell? This is a settler. This is anti-settler,” he said. “Palestinians understand this.”

Marcus said: “The targets in his cartoons are Jews. The point is to dehumanize.”

The media critic said official Palestinian incitement waxes and wanes, depending on what the leadership wants — quiet or rebellion, “though they are having a hard time controlling this wave.” Marcus said propaganda was far worse during the second intifada, or uprising, in the early 2000s, when Palestinian factions steered suicide bombers at Israeli targets. “Today it is much milder,” he said.

The caricaturist asked why it was wrong for him to draw a cartoon depicting stones when the world media, including The Washington Post, have been running the same visual cliche of the Palestinian rock-thrower for decades: “It’s okay for you, but not for us?”

Asked why Palestinian cartoonists often draw knives and stones, Sabaaneh said, “It is the right of Palestinians to resist occupation with the means we have.”

He emphasized: “All means.”

Violence in Israel and the West Bank is intimate and primitive these days. In July, assailants torched the home of the Dawabsha family in the Palestinian village of Duma in the West Bank. A toddler, his father and his mother died of burns. Israeli authorities have suggested the attack was carried out by Jewish extremists, but no arrests have been made.

Sabaaneh drew a cartoon that shows a hooded arsonist lighting a toddler’s crib on fire under the caption “Israel ISIS.”

“We’ve been seeing a ton of this,” said Marcus of Palestinian Media Watch. “In the old days, they compared Israelis to Nazis. Now they are comparing Israel to the Islamic State.”

“This is about the attack by Jewish settlers against the Dawabsha family,” Sabaaneh said. This happened.”

Sabaaneh is paid about $700 a month for his cartoons. “Not enough for cigarettes,” he said. His day job is working as an administrator at Arab American University’s Ramallah campus.

Sabaaneh says he does not belong to any Palestinian political faction but concedes that Al-Hayat would not run a cartoon that, for example, criticizes Abbas, who is more unpopular than ever.

He got in trouble this year for allegedly depicting the prophet Muhammad scattering seeds of hope. He had to quickly explain that it was humanity “inspired by the prophet,” because Islam forbids portraits of Muhammad. Abbas criticized the drawing as “a terrible mistake."

Although he lives only a few miles away, Sabaaneh said he has never been to Jerusalem, because he cannot get a permit from the Israelis.

He has never visited al-Aqsa Mosque. The Israelis he encounters in the West Bank are Jewish settlers or soldiers — and the occasional peace activist.

Sabaaneh did go to Israel once, he joked, without a permit — he spent five months in an Israeli prison in 2013 in the Negev Desert on charges of “association with an enemy organization,” namely the Islamist militant movement Hamas.

He denies the charge. “I’ve been on the Hamas blacklist since 2008,” he said, since he made a cartoon that poked fun at Hamas leader Ismail Haniyeh as a proxy of Iran.

He did a collection of drawings called “Cell No. 28” from his time in prison. He had a lot of time on his hands, he said.

William Booth is The Post’s Jerusalem bureau chief. He was previously bureau chief in Mexico, Los Angeles and Miami.