tv Trump’s Sorry Night on ‘SNL’: An Overhyped Bummer For Us All 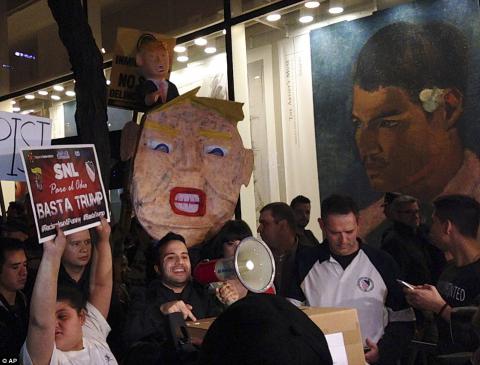 Demonstrators protest Donald Trump's views on immigration hours before his appearance on “Saturday Night Live.”, Katie Park
Donald Trump’s highly touted and almost certainly inappropriate hosting gig on NBC’s “Saturday Night Live” turned out to be an anemic and halfhearted dud.
Once upon a time, not so long ago, there might be a lesson to learn from Saturday’s boring and misspent episode — but that world no longer exists, certainly not where politics and TV intersect. Everything’s turned upside down. Bring back the old America, I say, the one where our preeminent vehicle for topical satire would have ably skewered a hateful, nonsensical, vainglorious presidential candidate, rather than invite him into the club and give him more of the empty-calorie media attention he seeks.
Having Trump host “SNL” is a tacit nod of approval — of his message, his antics and, yes, his campaign to be the Republican presidential nominee. Worst of all, it provided Trump with more dubious evidence of his own preeminence. When and if boffo ratings reports come out Sunday, he will promote them as proof of his electability, rather than as evidence that anyone will slow down to gawk at a car wreck. (Never mind the fact that overnight TV ratings are fast becoming an unreliable insight into American cultural sensibilities; Trump still regards them as the gold standard of existence.)
“SNL” is not alone in its mistake — every media outlet (The Washington Post included) has wrestled with intense bouts of Trump fever, especially late-night TV, which for several months has joked about and imitated Trump and, of course, invited him to appear on their shows. No one seems able to deal him the ultimate blow and ignore him.
Yet, curiously, no one involved with Saturday’s “SNL” episode seemed to have the desire to participate in it or play with him. After a passable cold-open sketch about Friday’s Democratic forum on MSNBC (a sketch that didn’t require Trump, but did feature Larry David’s second appearance this season as Bernie Sanders, the show’s lone buzzworthy invention so far this year), the cast members telegraphed an awkward vibe of reluctance when it came to performing on stage with the bombastic billionaire. Even jokes about their awkwardness being around him fell flat.
“I don’t want to be in this sketch anymore,” said Vanessa Beyer, who played a sad-looking boy accordionist during a bit in which an off-stage Trump pretended to tweet mean comments about the performers. (Beyer’s sentiment was a joke, but it didn’t feel like one. It felt like truth.) The show’s writers also dropped the ball — or simply never felt like playing to begin with. Who can blame them? They never should have been put in this position.
Traditionally, “Saturday Night Live” was meant to be a place where people holding or running for office are imitated, mocked and even skewered by the show’s actors and writers. Occasional cameo appearances by the actual politicians lend both “SNL” and individual campaign efforts a topical frisson, especially in election cycles. Yet, ever since Tina Fey’s sensational run as 2008 vice-presidential hopeful Sarah Palin, “SNL” has come to lean too heavily on its role as a place for political satire — even as far better political satire venues (led by Comedy Central’s “The Daily Show With Jon Stewart”) stole the show’s thunder in that department.
It’s entirely possible that the current crew at “SNL” — onstage and in the writers’ room — just isn’t cut out for the heavy comedic lifting that the 2016 election will require. The stakes are higher than they used to be when it comes to political comedy. This gang occasionally excels at making fun of celebrities (and themselves) and inventing strange characters, but they just aren’t ready for an election cycle that has so far proven to be more bizarre than past “SNL” casts ever had to grapple with.
That weakness can easily express itself as desperation — and desperation may be the reason “SNL” executive producer Lorne Michaels invited Trump to host a full show, rather than use him in a more traditional cameo.
Instead of garnering great buzz from this stunt, “SNL” offended many, including all the protesters outside 30 Rockefeller Center, who have legitimate complaints about what Trump has said about immigrants. On air, it seemed that no one was able to rightfully claim one protest group’s offer of $5,000 to anyone who could infiltrate Studio 8H and heckle Trump by calling him racist. Instead, the show had Larry David, now out of his Sanders costume, do it. “You’re a racist,” David yelled. For all appearances, it seemed genuine enough.
From there it was one dud after another — some of it featuring Trump, much of it not, the minutes slowing to a crawl. A sketch set in 2018, in a wildly successful Trump White House, fell apart quickly. “Weekend Update” did a fair job of playing a little offense. (Co-anchor Michael Che, in reference to the title of Trump’s new book, “Crippled America: How to Make America Great Again”: “Whenever old white dudes start talking about the good ol days, my Negro senses start tingling.”)
The “Update” segment also made good use of Bobby Moynihan’s “Drunk Uncle” character — turns out he’s the ideal demographic for the Trump message. “Finally someone is saying the things that I have been thinking — as well as saying,” Drunk Uncle muttered. “It’s like I’m running for president.”
In that one little riff, there was a reminder of what “SNL” is really for — to make fun of people running for president; not to buddy-up to them.
Hank Stuever has been The Post's TV critic since 2009. He joined the paper in 1999 as a writer for the Style section, where he has covered an array of popular (and unpopular) culture across the nation.
Subscribe to Portside