Destruction of Palestinian Olive Trees is a Monstrous Crime

The uprooting and cutting down of over a million olive and fruit trees in occupied Palestine since 1967 is an attack on a symbol of life, and on Palestinian culture and survival, writes Dr. Cesar Chelala. A grave crime under international humanitarian law, the arboricide is also contrary to Jewish religious teachings. 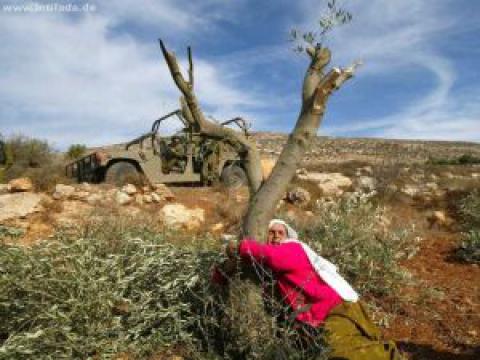 Give me a land of boughs in leaf,
A land of trees that stand;
Where trees are fallen there is grief;
I love no leafless land.

During the last few years, Palestinian olive trees - a universal symbol of life and peace - have been systematically destroyed by Israeli settlers.

"It has reached a crescendo", stated a spokeswoman for Yesh Din, an Israeli human rights organization monitoring incidents in the West Bank. "What might look like ad hoc violence is actually a tool the settlers are using to push back Palestinian farmers from their own land."

The tree and its oil have a special significance throughout the Middle East. The olive tree is an essential aspect of Palestinian culture, heritage and identity, and has been mentioned in the Bible, the Qur'an, and the Torah. Many families depend on the olive trees for their livelihood.

Palestinians plant around 10,000 new olive trees in the West Bank every year. Most of the new plants are from the oil-producing variety. Olive oil is the second major export item in Palestine.

Over a million trees destroyed in 40 years

Over the last 40 years, over a million olive trees and hundreds of thousands of fruit trees have been destroyed in Palestinian lands. The Israel Defense Forces have been accused of uprooting olive trees to facilitate the building of settlements, expand roads and build infrastructure.

The uprooting of centuries-old olive trees has caused tremendous losses to farmers and their families. At the same time, restrictions to harvesting have come through curfews, security closures and attacks by settlers. One such attack in the South Hebron Hills was documented on The Ecologist last February.

The uprooting of olive trees by the Israel Defense Forces and by settlers are done to protect the settlers, since they are supposedly used to protect gunmen or stone throwers. "The tree removals are for the safety of settlers ... No one should tell me that an olive tree is more important than a human life", declared an IDF army commander, Colonel Eitan Abrahams.

As a result of the attacks on farmers by the IDF and by settlers, declared B'Tselem, an Israeli human rights organization, the farmers "can't get to their lands and work them. The settlers chase the farmers, shoot in the air, threaten their lives, confiscate their ID cards and damage the crops."

Practically none of the complaints filed during the past several years on damage to Palestinians trees in the West Bank has resulted on an indictment. The toll includes thousands of trees from several areas from Susya in the southern Hebron Hills to Salem in northern Samaria.

Last April, Israeli settlers from the Immanuel settlement uprooted some 450 olive trees and saplings from lands in Deir Istiya, northern Salfit. This followed the uprooting earlier of 120 olive trees in Wadi Qana.

Since 1967 some 800,000 olive trees have been uprooted by Israeli forces and settlers in the occupied West Bank alone, according to research from the Palestinian Authority and the Applied Research Institute Jerusalem. This has threatened the livelihood of 80,000 families.

In a review he wrote on this issue, Atyaf Alwazir, a young Muslim American, stated that the uprooting of trees from Palestinian lands violates the Paris Protocols, The Hague and Geneva Conventions and the Covenant on Economics, Social and Cultural Rights.

The destruction of the olive trees is also a specific violation of Article 54 of the 1977 Protocol to the 1949 Geneva Conventions, which prohibits the "starvation of civilians as a method of warfare". It states:

"It is prohibited to attack, destroy, remove or render useless objects indispensable to the survival of the civilian population, such as foodstuffs, agricultural areas for the production of foodstuffs, crops, livestock, drinking water installations and supplies and irrigation works, for the specific purpose of denying them for their sustenance value to the civilian population or to the adverse Party, whatever the motive, whether in order to starve out civilians, to cause them to move away, or for any other motive."

According to Sonja Karkar, founder of Women for Palestine in Melbourne, Australia, uprooting olive trees is contrary to the Halakha (the collective body of Jewish religious law) principle whose origin is found in the Torah: "Even if you are at war with a city ... you must not destroy its trees."

To some Jewish activists' credit, however, many of them are collaborating in the planting of new olive trees, to replace some of those uprooted by the Israeli settlers. On several occasions Rabbis for Human Rights has donated saplings to Palestinian communities affected by the uprootings.

What do settlers actually want? To continue destroying Palestinians' livelihood with impunity? To create a barren land, unfit for trees and people? To intimidate, terrorize and punish those who resist this tactic?

Perhaps they should be reminded of A. E. Housman's verses,

Give me a land of boughs in leaf,
A land of trees that stand;
Where trees are fallen there is grief;
I love no leafless land.

Dr. Cesar Chelala is a co-winner of the 1979 Overseas Press Club of America award for the article 'Missing or Disappeared in Argentina: The Desperate Search for Thousands of Abducted Victims'.