The Socialist leader, António Costa, 54, is now expected to become prime minister in the coming weeks with a broad, leftwing coalition government, which hopes to ease austerity while still adhering to European Union rules. “The taboo has ended; the wall has been broken,” he said after the vote. “This is a new political framework; the old majority cannot pretend to be what it stopped being.” 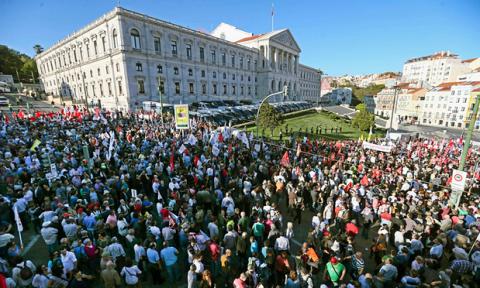 A protest outside the Portuguese parliament building in Lisbon before the vote. , joao Profirio/EPA

A surprise alliance of leftwing parties with a mission to “turn the page” on austerity has ousted Portugal’s centre-right government barely 11 days after it took power.

The moderate centre-left Socialist party forged an unprecedented alliance with the smaller Communist party and the radical Left Bloc, linked to Greece’s anti-austerity Syriza party, and used a parliamentary vote on policy to force the government to resign on Tuesday.

The Socialist leader, António Costa, 54, is now expected to become prime minister in the coming weeks with a broad, leftwing coalition government, which hopes to ease austerity while still adhering to European Union rules.

“The taboo has ended; the wall has been broken,” he said after the vote. “This is a new political framework; the old majority cannot pretend to be what it stopped being.”

The toppled government of the prime minister, Pedro Passos Coelho, came first in last month’s election but lost its absolute majority as voters questioned the harsh and unpopular austerity he had imposed in return for a €78bn international bailout in 2011, during his first term.

Passos Coelho, who cut salaries and pensions, slashed public services and introduced the largest tax rises in living memory, argued he was the only one who could be trusted to lead Portugal through its economic recovery.

He planned to continue leading the country with a minority government, but the unlikely alliance of opposition parties on the left joined together to topple the government, making it the shortest administration since Portugal became a democracy in 1974 after 48 years of dictatorship.

The showdown came as Portugal – despite the beginnings of an economic recovery after exiting the bailout scheme – remains heavily in debt and vulnerable. Unemployment is still painfully high at 12%, rising to 30% among young people. Living standards have fallen sharply in what is still western Europe’s poorest nation. One in five people continues to live below the poverty line with an income of less than €5,000 (£3,684) per year. Health and education services have been affected by cuts.

The new alliance, which would have been unthinkable only a few weeks ago because of party differences, is made up of several strands of the left. At the helm is Costa, a popular former mayor of Lisbon and head of the Socialists, a moderate mainstream party with a long history in government. Although Costa has pledged to ease back on austerity and boost households’ disposable income, he is nonetheless a moderate who is keen to abide by Europe’s budget deficit rules.

He had long been at pains to reassure investors and Portugal’s eurozone partners that a Socialist-led government would not result in a Greece-style clash with creditors and that he would respect Portugal’s international commitments.

He told reporters as he left parliament after the vote: “We’re in a position to assure the scrupulous fulfilment of our international obligations, but while allowing family income to recover, and the economy and employment to grow.” He said the deal he made with the two smaller, more radical-left parties who have never been in government was serious. As centre-right politicians warned of a fragile alliance, Costa told parliament he could guarantee a stable government.

Unlike in Greece, where the far-left Syriza party leads the government, Portugal’s Communists and the Syriza-allied Left Bloc would play a supporting role.

The Left Bloc, led by Catarina Martins, 42, a charismatic actor-turned-activist, was established in 1999 and made a surprise breakthrough in the elections, winning just over 10% of votes and making it the country’s third-biggest political grouping. The party has recommended mass disobedience against austerity and, like the Communists, wants Portugal out of Nato.

Portugal’s long-established Communist party has a traditional Marxist-Leninist stance and took its usual 8% of the vote in the recent elections. It has campaigned to nationalise the country’s banks and energy companies. It is led by Jerónimo de Sousa, a 68-year-old political veteran who started work in a factory aged 14. De Sousa told parliament: “Millions of Portuguese people will breathe a sigh of relief at the end of a [centre-right] government which for four years has made their lives hell.”

To achieve their unprecedented alliance with the Socialists and gain a door to power, the smaller parties will probably surrender their more hardline positions. A policy agreement for the next four years negotiated between the three parties is not yet public, but the Socialists insist on abiding by eurozone financial rules. The new coalition’s plans are believed to include reversing pay cuts for government workers and restoring four public holidays that were scrapped to boost productivity.

The politicians argued that various left-of-centre parties had together collected 62% of the vote in last month’s election.

In 2011, Portugal became the third eurozone country after Ireland and Greece to be bailed out. Four years later, it has left the bailout scheme but only after implementing stringent austerity measures in return for funding. There have been steep tax increases, deep cuts in welfare rights, pay and pensions, as well as changes to labour entitlements. After three years of recession, the economy has grown this year. But unemployment, job precarity and poverty still hit hard.

Emigration was also a major campaign issue. A total of 485,000 people left Portugal between 2011 and 2014, the highest emigration rate in more than 50 years in a country whose total population stands at around 10 million. The recent exodus surpassed the wave of Portuguese emigration in the 1960s that saw an unskilled labour force leave. This time, qualified youth, including scientists, doctors and nurses, have left.