"Liberté Is Not Just A Word": Klein, Corbyn Call for Mass Protest at COP21

"We will be mourning the lives already lost to climate disruption, in solidarity with the lives lost to the tragic attacks here in Paris and enlarging that circle of mourning," Klein said. "By taking to the streets, we will be clearly and unequivocally rejecting the Hollande government's draconian and opportunistic bans on marches, protests, and demonstrations." 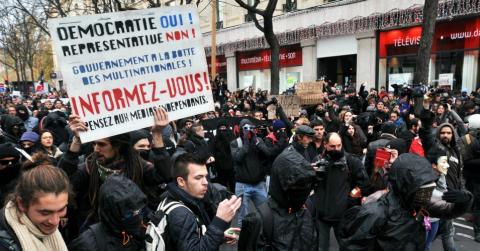 The demonstration planned for December 12th will stand in opposition to Hollande's "draconian and opportunistic" ban on activism., Chris Bentley/flickr/cc

In Paris on Monday, a panel of activists, including author Naomi Klein and UK Labour Party leader Jeremy Corbyn, spoke to a packed crowd on the role of the global labor sector in the climate justice movement and called for mass civil disobedience to break French President François Hollande's ban on demonstrations during the COP21 summit.

Klein spoke candidly about the global climate agreement being hammered out by world leaders this month, stating, "The deal that will be unveiled in less than a week will not be enough to keep us safe. In fact, it will be extraordinarily dangerous."

"Which is why on December the 12th, at 12 o'clock—that's 12-12-12—many activists will be peacefully demonstrating against the violation of these red lines," Klein said, prompting a round of applause from the audience of roughly 800 trade unionists and other workers and activists.

The march will protest the French government's crackdown on activism following the November 13 attacks that killed 130 people—and sparked a cross-border manhunt that many said flouted Europeans' civil liberties. Klein has been an outspoken critic of the ban.

"We will be mourning the lives already lost to climate disruption, in solidarity with the lives lost to the tragic attacks here in Paris and enlarging that circle of mourning," Klein said. "By taking to the streets, we will be clearly and unequivocally rejecting the Hollande government's draconian and opportunistic bans on marches, protests, and demonstrations."

"We will be rejecting the shameful preemptive arrests of climate activists... the restrictions on free speech and movement," she continued. "Liberté is not just a word, and it doesn't just apply to Christmas markets and football matches."

Corbyn added, "We've taken the responsibility on ourselves to do something here and now. To stop the destruction of the world's environment, to bring people together to prevent that happening, and above all, to bring people together not through fear, but through hope, through imagination, through optimism. Unleash the optimism, unleash the imagination, unleash the hope. That is the way forward."

The panel also discussed the importance of a "just transition" to a clean future, particularly by converting to a system of community-owned renewable resource infrastructures—a process also known as energy democratization.

"When communities have control over the production and distribution of clean energy, that's environmental justice," said Judy Gonzalez, president of the New York State Nurses Union, who also spoke on the panel.

Corbyn also hit back at criticisms that a focus on sustainable energy, in tandem with a fossil fuel phase-out, is financially nonviable. "A more sustainable energy policy... one that would help the issues we face on a global level, would actually be an economic generator, rather than a problem," he said.

Clara Paillard, president of the Public & Commercial Services Union culture sector, added, "If we want a just transition, we will need jobs—many, many jobs. Climate is a trade union issue."

"In 2008 the UK found 800 billion pounds to save the bank. And in the UK, tax avoidance and evasion represent over 100 billion pounds every year," Paillard continued. "Let's be clear, if the planet was a bank they would have already saved it."