Desperate to stem the “blackening” of the white homeland, the European Union last month offered billions in bribes to African governments to keep their citizens at home. “The goal of the ‘cash on the table’ deal was to place the responsibility for denying Africans refugee status in Europe on the shoulders of African countries.” 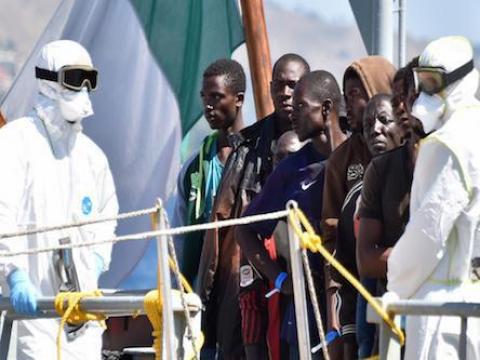 “The EU agreed to offer African countries €1.8bn (equivalent to $1.9 billion) in exchange for the deportation of ‘unwanted’ migrants.”

On November 12th, European and African countries met on the beautiful Mediterranean Island of Malta in the city of Valletta to determine the fate of African refugees seeking sanctuary in Europe. The Valletta meeting was devoid of the usual diplomatic niceties and perfunctory lip service that usually accompanies this kind of event. No one bothered to give lip service to the “give me your poor, your huddled masses longing to be free” propaganda. The topic was African refugees and the challenges facing global capital; the subject precluded such diplomatic nonsense. The only question directed to Africa’s kleptocracy was whether they would accept the cash Europe had placed on the table in exchange for allowing their white counterparts to deny African migrants the rights to seek refugee status in Europe.

Three years earlier, in a jaw-dropping example of imperial arrogance, then Secretary of State Hillary Clinton shared laughter with a member of the media when she heard of the assassination of Libyan leader Muammar Qaddafi by stating: “We came, we saw, he died.” She and her imperial counterparts were never held accountable for the mayhem and death that ensued as a result of their intervention.  Dark skinned Libyans and African families living in Libyan soon became targets of right-wing death squads – supported by US allies – that would compel them to flee Libya across dangerous waters and seek refuge in European capitals. As their country was torn apart by NATO and US intervention, these Libyan refugees would join Syrian refugees fleeing US and western designs that would unleash massive munitions on their towns and communities.

“African masses were caught between the proverbial rock and a hard place.”

One unintended consequence, however, of US foreign policy and its interventionist regime change protocol is what European leaders view as the blackening of Europe. With hundreds of African refugees arriving on European shores this fear went from theory to imminent reality. African masses were caught between the proverbial rock and a hard place: the deadly place between African leaders serving at the pleasure of their European compatriots and a hostile Europe.

The Guardian reported that the EU agreed to offer African countries €1.8bn (equivalent to $1.9 billion) in exchange for the deportation of “unwanted” migrants.  “Unwanted” migrants” is the euphuism employed to refer to migrants – human beings from Africa. The goal of the “cash on the table” deal negotiated in Malta was to remove the optics of a policy that would be construed as racist and to place the responsibility for denying Africans refugee status in Europe on the shoulders of African countries. This policy seeks to sacrifice the lives of Africans in order to “stabilize” Europe – both economically and culturally – as well as to tackle the issue of controlling the number of Black faces in Europe.

“When did Europe ever operate on behalf of African people.”

Theresa May, the British Home Secretary offers the solution of pouring “hundreds of millions in additional aid into Africa to try to discourage hundreds of thousands of people from heading to the EU.”  Her proposal would result in working “with African countries, the countries of origin, to ensure people don’t feel the need to make this journey to Europe.” She continues, “In the UK we are putting £200 million extra aid into Africa to help ensure we provide the circumstances there that ensure that people don’t make this journey.”

We all agree.  African citizens are certainly better off in countries that support their aspirations and communities rather than becoming 3rd or 4th class citizens in Europe. May’s concerns, however, have no historical precedence.  When did Europe ever operate on behalf of African people except when Africa or its people were used to benefit the goals and priorities of Europe?

African migrants from countries with ineffective and often compromised leaders are caught in the middle.  Tragically, this generation of African leaders has no idea, considering the insulting outcome of the Valletta Conference, of how to protect their own class interests or how to take advantage of a strategic moment in history. A moment in history characterized by a weak international economy flailing in its attempt to stabilize global capitol as it loses momentum in a downward trajectory.

Dr. Marsha Coleman-Adebayo is the author of the Pulitzer Prize nominated: No FEAR: A Whistleblowers Triumph over Corruption and Retaliation at the EPA. She worked at the EPA for 18 years and blew the whistle on a US multinational corporation that endangered South African vanadium mine workers. Marsha's successful lawsuit led to the introduction and passage of the first civil rights and whistleblower law of the 21st century: the Notification of Federal Employees Anti-discrimination and Retaliation Act of 2002 (No FEAR Act). She is Director of Transparency and Accountability for the Green Shadow Cabinet, serves on the Advisory Board of ExposeFacts.com and coordinates the Hands Up Coalition, DC.