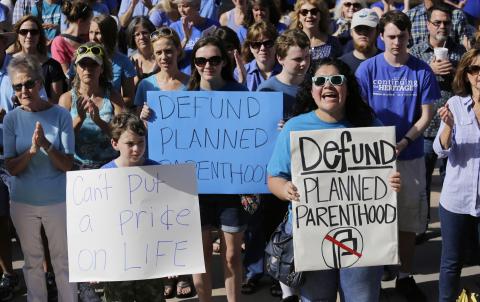 Anti-abortion activists rally on the steps of the Texas Capitol on July 28, 2015, in Austin, AP Photo / Eric Gay

Despite the right’s insistence that Robert Dear, the man who shot and killed three people at a Planned Parenthood clinic in Colorado last month, was really a bank robber or a “transgendered leftist activist”—really, anything but an anti-choice radical—it’s now quite clear that Dear was motivated by opposition to abortion. “I’m a warrior for the babies,” he shouted at a court appearance Wednesday, where he was charged with 179 felony counts. “Seal the truth, kill the babies, that’s what Planned Parenthood does,” he said at another point.

Dear chose an exceptionally horrific way to undermine women’s constitutional right to end their pregnancies, and the rights of the doctors who care for them. But there were hundreds of other, subtler attempts to restrict access to reproductive healthcare throughout the country this year, via legislative feints that have become so widespread they seem entirely unexceptional: onerous clinic rules, mandatory waiting periods, and other regulations framed as health and safety measures that have little medical basis. State lawmakers introduced nearly 400 such bills in 2015, 47 of which passed, according to a report released this week by the Center for Reproductive Rights.

The new laws are concentrated in Southern states, where many abortion providers have already been forced to close. At least 20 bills were introduced in response to undercover videos released by the Center for Medical Progress, which purport to show Planned Parenthood engaging in illegal sales of fetal tissue—claims that have not be verified by any of the numerous investigations launched since. At least a dozen states tried to defund Planned Parenthood. Others tried to ban fetal tissue research completely, or to impose costly new regulations about medical waste disposal.

Arkansas legislators earned a dubious distinction for being most rabidly anti-abortion. The state enacted more restrictive laws than any other, including a Planned Parenthood defunding measure. Arkansas also passed a bill that forces women to wait 48 hours between an initial consultation and an abortion procedure, and requires doctors to tell patients that medication abortion can be “reversed,” an assertion that isn’t supported by scientific evidence. North Carolina and Oklahoma increased their mandatory waiting periods to a full 72 hours, joining three other states with the country’s longest forced wait between state-mandated counseling and an abortion procedure.

Kansas and Oklahoma pioneered a new tactic for limiting the window in which abortion is legal, passing laws that criminalize doctors who perform a technique known as “D and E,” which is commonly used to end a pregnancy in the second trimester. The Center for Reproductive Rights calls it the “safest, most effective, and most commonly used” procedure in the second trimester. It’s also the only one doctors use after 14 weeks of pregnancy, and so the ban could effectively make all abortions after that point illegal. Legislators in West Virginia, where only two health clinics provide abortions, overrode the governor’s veto to criminalize abortion after 20 weeks. Wisconsin also passed a 20-week ban.

Texas managed to put up more red tape for women seeking abortion care: an “abortion ID” law, which requires women to provide “proof of identity and age” to verify that they are not a minor. The measure “could serve as a backdoor ban on undocumented women and low-income women,” the Center for Reproductive Rights wrote, because they are more likely than others to lack the necessary identification.

Most of the bright spots came courtesy of the courts. Judges struck down Arkansas’s ban on abortion after 12 weeks, Idaho’s 20-week ban, and North Dakota’s 20-week ban, in all cases because they conflict with clear Supreme Court precedent “holding that states may not prohibit pre-viability abortions,” as the Eighth Circuit noted in the North Dakota case. A judge in Alabama blocked a law requiring abortion providers to secure admitting privileges at a hospital, allowing one clinic that had been forced to close to reopen while the case continues; a similar law was temporarily blocked in Wisconsin.

The most significant legal development this year was the Supreme Court’s decision to consider two measures in a massive anti-abortion omnibus bill Texas passed in 2013. The first restriction requires physicians who perform abortions to have admitting privileges at a hospital within 30 miles. The second requires facilities that perform abortions to meet standards set for a hospital operating room, a restriction that could force all but 10 of the state’s clinics to close. The ruling, expected in late June, will be the first to affect abortion rights since 2007, when the Court upheld the Partial-Birth Abortion Act in Gonzalez v. Carhart. The law’s opponents argue that the regulations put an “undue burden” on women seeking to end a pregnancy, a standard set by the court in the 1992 case Planned Parenthood v Casey. The ruling could help roll back other state laws aimed at narrowing abortion access—or it could sanction the campaign to make abortion effectively, if not legally, unobtainable.