Princeton Students Are Right: Woodrow Wilson Was Way Worse Than You Think

According to The Associated Press, Princeton President Christopher Eisgruber has acknowledged the students' concern about Wilson's racism. But he's urged them to take the rest of Wilson's career into account, including the fact that he was president of both Princeton and the United States. Unfortunately, a true accounting of Wilson's full impact goes far beyond his well-known racism. 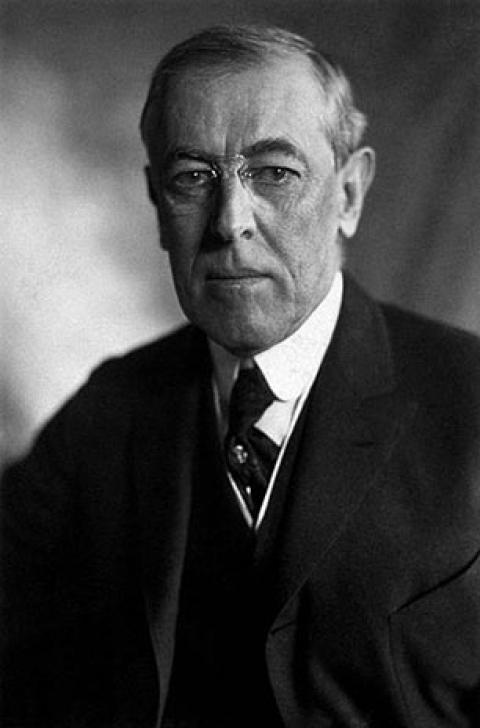 Princeton University's long-overdue uproar over Woodrow Wilson's racism barely scratches the surface of the damage he did to US democracy.

At the core of his foul legacy is the fact that he dragged the United States into a hated world war based on a monstrous lie, and that he used that war as cover to illegally shatter the United States' democratic Socialist Party while permanently shredding the US Constitution.

Students at Princeton are now demanding Wilson's name be removed from the university's prestigious School of Public and International Affairs and a residential dorm.

According to The Associated Press, Princeton President Christopher Eisgruber has acknowledged the students' concern about Wilson's racism. But he's urged them to take the rest of Wilson's career into account, including the fact that he was president of both Princeton and the United States.

Wilson loved the Ku Klux Klan. He lauded D.W. Griffiths' racist Birth of A Nation, which fed a Klan revival. He resegregated much of the federal government, harming Black families, whom he very explicitly deemed "inferior."

Wilson's League of Nations was an instrument of imperial conquest meant to make the world safe for white supremacy, not democracy.

Then, he got the US into World War I. Key was the Lusitania, a British passenger ship sailing in 1915 from New York to London. With war raging, the Germans claimed it was loaded with weapons. They warned passengers not to board it, and then sank it as an act of war.

Wilson responded with a national hate campaign against the "barbarity" of the "Huns." He was already in the process of invading Mexico, sending the slaughter all the way into Mexico City.

Decades later divers found the Lusitania and confirmed that it was, indeed, loaded with munitions. Wilson knew his war fever was based on a lie, or else did a very good job of "not knowing."

Wilson used war as an excuse to break the Socialist Party and the Industrial Workers of the World (IWW). He had broken new ground by reaching out to the conservative American Federation of Labor.

But AFL President Samuel Gompers wanted to be rid of Eugene V. Debs, the Socialist movement and the radical Industrial Workers of the World.

Debs at the time was the United States' most beloved popular leader. Thousands came out to hear him wherever he spoke. He got nearly a million votes for president in 1912. Most Americans assumed we would someday have a Socialist president.

Wilson arrested Debs and countless others for demanding peace. His postwar "Red Scare" saw Socialist Party offices burned, organizers assaulted and jailed, and IWW activists murdered outright. Above all, Wilson violently removed the Socialist alternative from mainstream US discourse, a crime for which we all still pay dearly.

Then, Wilson failed to negotiate a sane peace. Britain and France insisted on gouging the Germans, paving the way for the rise of Hitler and the next world war.

Meanwhile, Wilson's League of Nations was an instrument of imperial conquest. It was meant to make the world safe for white supremacy, not democracy.

Finally, Wilson succumbed to a stroke. His second wife, Edith, effectively took over the country and essentially killed US entry into the League of Nations. Meanwhile, opponents of the war languished in prison long after it ended.

Few world leaders have failed so utterly as Woodrow Wilson. He enshrined racism, gutted discourse on public control of the economy, shredded our civil rights and liberties, and paved the way for another global catastrophe.

The sooner Woodrow Wilson's name is removed from everything Princeton can put its hands on, the better.

Copyright, Truthout. May not be reprinted without permission.