Last year, the hotel violated federal labor law by suspending five workers for wearing union buttons and talking to their coworkers about the union drive. They were eventually reinstated with back pay. The union also filed an official complaint accusing Trump management of "incidents of alleged physical assault, verbal abuse, intimidation, and threats." 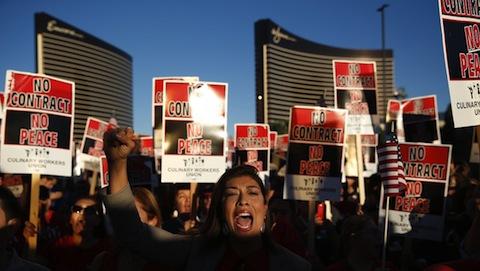 After a year of organizing, much of it in secret, a narrow majority of the workers voted earlier this month to join the Culinary Workers Union and Bartenders Union, which are part of the national hospitality workers union Unite Here. The text of the company’s complaint — filed with the National Labor Relations Board in D.C. — is not yet public, and multiple calls to the hotel’s management were not returned by the time of publication. But Trump hotel workers told ThinkProgress that their company is “objecting to the outcome of the vote and want it thrown out.”

“Mr. Trump has said repeatedly that he expects and insists on being treated fairly as he campaigns to be the next President of the United States of America,” said Jeffrey Wise, a food server at the hotel. “I also want to be treated fairly – My coworkers and I participated in a democratic election process — just like the one Mr. Trump is preparing for right now.”

The workers — more than 80 percent of whom are immigrants and more than 50 percent of whom are women — are now attempting to negotiate with a boss known for making statements offensive to women and immigrants on the campaign trail. As they attempt to coax Trump management to the bargaining table, the workers have decided not to criticize their boss or their working conditions in any way. Yet speaking to ThinkProgress at the union’s offices just a few miles from the glitzy casino strip, they were frank about why they wanted to form a union and the obstacles they have faced in doing so.

“We voted yes to make our jobs good jobs with fair wages and job security,” said Celia Vargas, a housekeeper at the property. The workers said they are also pushing for better health care benefits and more flexible quotas for how many rooms can be cleaned in a day.

Yet while organizing around these demands, the workers have faced intimidation and retaliation. Trump and hotel co-co-ower Phil Ruffin contracted the anti-union law firm Seyfarth Shaw to discourage the workers from organizing. Last year, the hotel violated federal labor law by suspending five workers for wearing union buttons and talking to their coworkers about the union drive. They were eventually reinstated with back pay. The union also filed an official complaint accusing Trump management of “incidents of alleged physical assault, verbal abuse, intimidation, and threats.” 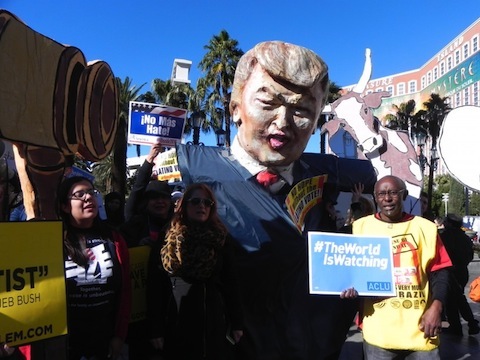 In August 2015, the NLRB sided with the union in another complaint against Trump Las Vegas, alleging the company “interfered with, restrained and coerced workers in the exercise of federally protected rights, including incidents of surveilling, interrogating, and threatening workers with reprisals, rules suppressing employee free speech, and on one occasion physically pushing workers in the parking lot.” The complaint also alleges that Trump Las Vegas fired a union-supporting employee in order to discourage her co-workers from engaging in union activities.

Bethany Kahn with the Culinary Workers Union, which represents tens of thousands of workers at some of the biggest hotels and casinos in Las Vegas, told ThinkProgress that her members who are already under a union contract fare better than employees at non-union hotels like Trump International.

“The Trump Hotel Las Vegas workers are paid approximately $3.33 less per hour across classifications compared to the workers all around them who do the same work at [union hotels such as] the Wynn, Treasure Island, The Mirage, MGM, etc,” she said. “There are some stark differences.”

Workers the union already represents at other hotels pay no month health insurance premiums, and their family members get medication fully covered. They are also guaranteed a pension so they can “retire with dignity.”

If Trump continues to oppose the union, and refuses to negotiate a contract with the workers, they may decide to put pressure on the company by organizing pickets or calling for a boycott. While it can be nerve wracking to stand up to a boss whose catchphrase is “you’re fired,” it can helps to have the eyes of the nation on your workplace. All three Democrats running for president have voiced support for the workers and called on Trump to recognize their union.

Yet the workers have the challenge of demanding recognition during an election where anti-union rhetoric is on the rise. Many leading GOP candidates have vowed to implement laws like “right-to-work” nationwide, making it more difficult for unions to recruit workers and bargain strong contracts, and have railed in speech against unions representing teachers, postal workers, and federal employees. Though many of Trump’s hotels, from Toronto to New York City, are already unionized, this new battle could give him an opportunity to burnish his anti-labor credentials within his party.

In a telling move, Tuesday’s night’s Republican debate is taking place at The Venetian — one of the last remaining non-union hotels on the Las Vegas Strip, owned by the billionaire conservative donor Sheldon Adelson. Trump is openly seeking Adelson’s endorsement but says he doesn’t need his money, and huddled with him just before the debate.