The Laws and Rules That Protect Police Who Kill

Despite the political pressure to prosecute cops in cases like Tamir Rice’s, the current system grants enormous leeway to officers who employ lethal force. 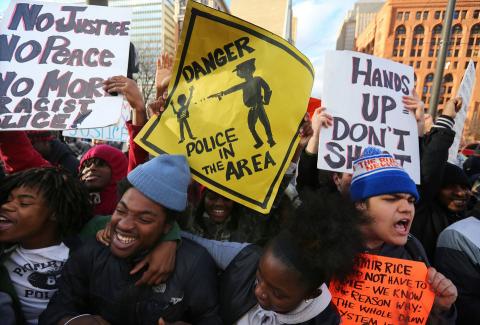 Although 2015 will go down as the year when the United States began grappling with the problem of police violence, it ended with a trio of defeats for reformers.

First, a jury in Baltimore was unable to come to a verdict in the trial of Officer William Porter, one of several officers charged in the death of Freddie Gray. Several days later, a grand jury in Waller County, Texas, decided that there had been no crime committed in the death of Sandra Bland in a jail cell there. Finally, and most gallingly to many observers, on Monday a grand jury in Cuyahoga County decided not to indict two officers in the shooting death of 12-year-old Tamir Rice.

Taken together, these cases—and particularly the Baltimore and Cleveland cases—demonstrate yet again the difficulty involved in holding police accountable when civilians are killed. Even as there is greater awareness about the toll that police killings take, police are seldom prosecuted, and when they are, they are seldom convicted. That was the case before Michael Brown’s death in August 2014, and it remains true today. The reasons for that are various. Prosecutors are reluctant to bring charges against police, because they rely on officers to gather information and serve as witnesses in other cases. Juries tend to be deferential to officers.There are also legal protections: In Graham v. Connor, the Supreme Court ruled that events “must be judged from the perspective of a reasonable officer, rather than with the 20/20 vision of hindsight.” Finally, even when the facts seem clear-cut, the law grants police wide latitude. Although many people who watched dash-cam footage of Bland’s arrest were horrified by Trooper Brian Encinia’s conduct, police experts who reviewed the footage, including some who criticized Encinia’s judgment in no uncertain terms, generally felt he had acted within his legal authority. Many departments employ “use-of-force matrices,” which detail what steps an officer may take during an incident, in some cases giving them the right to use more aggressive action than might be necessary or seem justified to an outside observer.

This was particularly apparent in the Rice case. The boy was shot by an Officer Timothy Loehmann just seconds after he arrived on the scene, sent by a dispatcher who told him there was a report of a man pulling out a gun and pointing it at people. Surveillance footage of the death galvanized and appalled the nation. The 12-year-old being gunned down by the officer so abruptly seemed to exemplify overuse of deadly force, while the ensuing events—Rice’s sister was prevented from reaching him, and officers did little to save his life—clinched the case as a signal injustice. As more information emerged about Loehmann, including his abbreviated, troubled career with another Ohio police department, there seemed to be widespread recognition that he shouldn’t have been wearing a badge and that he had acted inappropriately when he shot Rice.The problem is that although Loehmann’s actions may have seemed obviously inappropriate to a layman, that doesn’t mean that they actually violated the law. Three independent reports, commissioned by Cuyahoga County Prosecutor Timothy McGinty all found that the Loehmann and his partner Frank Garmback had acted within proper protocols and rules for officers. (One report used particularly unfortunate and offensive language, likening Rice’s loss of life to the potential end of Loehmann’s career.) The grand jury’s decision not to indict is simply the latest evidence that no statutory crime may have been committed.

In announcing the grand jury’s decision, McGinty made that argument: What happened was terrible, but I can’t prove it was a crime. “The state must be able to show that the officers acted outside the constitutional boundaries set forth by the Supreme Court of these United States,” he said, and while Rice’s death was a “tragedy,” McGinty said, “it was not, by the law that binds us, a crime.”

That isn’t to say that McGinty couldn’t have procured an indictment—if not necessarily a conviction—if he’d taken a more aggressive strategy. The DA has come in for harsh criticism throughout the case. He took an extremely long time to bring the case before a grand jury—so long, in fact, that Rice’s family and activists dredged up an obscure Ohio law to get a municipal judge to issue at warrant for the officers, circumventing the McGinty’s process. (They received an unsatisfying split decision: A judge ruled that there was probable cause to arrest the officers, but that the law did not actually authorize him to issue warrants.)Activists and other observers accused McGinty of issuing the three independent reports as a way to justify a future failure to indict—a suspicion that Monday’s announcement will only reinforce. McGinty also failed to convict Officer Michael Brelo in the 2012 deaths of Timothy Russell and Malissa Williams, two residents gunned down after a mistaken chase. In short, McGinty seems at best soft on police and at worst ineffective as a prosecutor. “It has been clear for months now that Cuyahoga County Prosecutor Timothy McGinty was abusing and manipulating the grand jury process to orchestrate a vote against indictment,” Rice’s family said in a statement.

But one tough lesson of the William Porter case is that however lethargic McGinty’s approach may have seemed, a more aggressive approach is no guarantee of different results. Whether prosecutors move glacially and timidly or quickly and boldly, it’s hard to hold police accountable because of the way the law is written and the system works. Baltimore City State’s Attorney Marilyn Mosby did practically everything differently: She moved with incredible speed to bring charges against the officers involved in the death of Freddie Gray, and she brought an aggressive slate of charges—including a depraved-heart murder charge against one officer. She quickly obtained indictments from a grand jury and prepared to take the cases to trial.

But once the first trial began, the difficulties facing prosecutors became clear. A central element of the state’s case was an accusation that Porter had failed to restrain Gray with a seatbelt. Yet Porter’s team mounted a convincing argument that although Porter may have violated written policies, what he did was in line with general practice for Baltimore cops. The law was murky enough that it was tough to obtain a conviction, and some analysts felt that prosecutors were lucky to get a hung jury rather than simply an acquittal.