Confronting Racism on US Campuses Requires Facing the Legacy of Segregation

The upsurge of protest in communities of color against the increasingly visible pattern of unrestrained police brutality revealed in the wake of the killing of Michael Brown in Ferguson, Missouri, in 2014, combined with the rise of student activism over the climate on a variety of campuses in recent months have evoked memories of the civil rights movement in the 1950s. 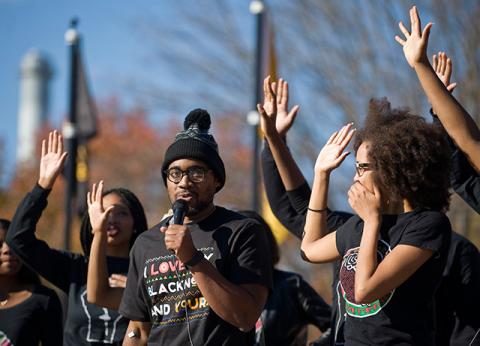 The idea that leaders at all levels of the US educational system need to be trained to recognize and combat racism is finally receiving renewed attention within academia, thanks to the intensity of the protests that erupted on streets and campuses across the country in 2015.

The protests that spread to university campuses across the country following the student protests against a racist campus climate and an unresponsive leadership at the University of Missouri-Columbia have again forced Americans to confront the recurrent failures of their higher education institutions to provide leadership on the issue of cultivating a moral and civic sensibility that should inform the ideas, culture and practice of citizenship and life in a multicultural society.

At Yale University, the president, Peter Salovey - in response to an intense debate on the campus sparked by an administrator writing to students about "appropriate Halloween wear" - issued a press release that included this statement:

Educating our community about race, ethnicity, diversity, and inclusion begins with the university's leadership. I along with the vice presidents, deans, provosts, and other members of the administration, will receive training on recognizing and combating racism and other forms of discrimination in the academy. Similar programs will be provided to department chairs, directors of graduate and undergraduate studies, masters and deans, student affairs staff, and others across the university.

As the leader of an Ivy League institution that has produced many leaders in US society, including both George H.W. Bush and George W. Bush, Salovey demonstrated the courage to state the obvious. Leadership is set by example, including the acknowledgment of personal and institutional inadequacies, and Salovey recognized the importance of the issue for his own institution and for others. It is a step that is worthy of emulation, especially since the president of the University of Missouri submitted his resignation when it became evident that his response to student discontent about the campus climate was inadequate.

The upsurge of protest in communities of color against the increasingly visible pattern of unrestrained police brutality revealed in the wake of the killing of Michael Brown in Ferguson, Missouri, in 2014, combined with the rise of student activism over the climate on a variety of campuses in recent months have evoked memories of the civil rights movement in the 1950s. The 1955 Montgomery bus boycott led by Martin Luther King Jr. - following the 1954 Brown v. Board of Education decision ruling that segregated education was unconstitutional - was a catalyst for subsequent student sit-ins at department store lunch counters to protest against segregation in public spaces.

The current wave of social and student protests around issues of police brutality, compromised citizenship, and the climate and curriculum at colleges and universities have awakened the ghosts of failures past in the contemporary context. The issues being raised today were also central to the efforts of the civil rights movement to lift the US above its Jim Crow culture in the 1950s and 1960s.

The current discourse about racism in higher education, however, reveals a lack of awareness about the points of connection between current protests, and struggles against segregation and racism at educational institutions in the first half of the 20th century.

Protesting Racism at the University of Missouri, Then and Now

In 1936, a talented student, Lloyd Gaines, sought admission to the University of Missouri's law school, which was reserved for white people only. He had recently graduated from Lincoln University in Jefferson City, Missouri - a school established to educate African Americans.

Missouri had adopted the practice of paying for the tuition of African Americans who wished to attend law school in neighboring states in order to maintain its Jim Crow commitment to segregated education. Gaines' willingness to challenge the University of Missouri won the support of the NAACP and its leading legal luminaries - Charles Hamilton Houston and Thurgood Marshall - who sought to use the case to mount a challenge to the 1896 Plessy v. Ferguson decision. The US Supreme Court ruled by majority decision, in favor of Gaines, that he was entitled to admission to the University of Missouri law school since he was entitled to an opportunity provided to white applicants and that Missouri was denying him the opportunity because of his "color." (Gaines v. Canada, 1938)On March 19, 1939, Gaines left his apartment in Chicago to purchase postage stamps and disappeared. He never enrolled at the law school and his disappearance remains a mystery. It wasn't until 1950 that Black students were actually enrolled at the University of Missouri. However, the Supreme Court decision in favor of Gaines is recognized as a legal precedent that helped to shape the Brown v. Board of Education decision in 1954. As Devoney Looser has suggested in an Inside Higher Education article, the president of the University of Missouri from 1935 to 1954, Frederick Middlebush, would have been a very ardent opponent of the effort to admit Gaines and other people of color to the University of Missouri until 1950.

It is a measure of the transformation of US society that student protests could force the departure of the president of the University of Missouri system and the chancellor of the University of Missouri - given the legacies of racist politics that have defined the history of the state and its flagship institution. These recent developments should also be understood within the context of the suicide of Sasha Menu Courey, a young Canadian female student of mixed ancestry whose death was apparently related to allegations of rape and a resulting mental health crisis as presented in an ESPN report.

The ESPN report has raised questions about whether there had been serious mistakes made and whether mistakes resulted in the closure of the case without police being able to establish conclusive evidence about the events surrounding the tragedy that enveloped her years and death at the University of Missouri.

The University of Missouri - by virtue of its history as a reluctant participant in the desegregation of US higher education in the first half of the 20th century - has found itself embroiled in a struggle over its current climate for students of color in 2015 amid the unresolved questions about Sasha Menu Courey's death.

The current protests against the exclusionary climate at the universities and in the streets against police brutality have laid bare the limitations and failures of the post-1968 era in US politics. Richard Nixon's embrace of the segregationist wing of the Democratic Party - the so-called Southern strategy - provided the basis for his victory in the 1968 presidential election and breathed new life into the culture of white supremacy over succeeding decades of Republican domination of the national political agenda. The election of Barack Obama as president in 2008 heralded an intergenerational shift in US politics and has opened the space for a new generation of young activists to challenge the post-1968 dispensation. The immediate targets are the continued deference to the ethos of segregation, which legitimizes support for the culture of exclusion and police disdain directed against people of color.

In this context of challenge to a discredited - but not defunct - order, it should not be a surprise that protests have also erupted at Princeton University. Woodrow Wilson, an architect of the vision for an "American century" and champion of the League of Nations, had served as president there before ascending to the office of the president of the United States in 1912.

Wilson established his reputation as an aggressive proponent of segregation who, during his two terms in office, institutionalized the culture of Jim Crow at the level of the federal government and in the wider society. It is a legacy that is reflected at Princeton's Woodrow Wilson School of Public and International Affairs and to the surprise of many, The New York Times published an editorial in November that argued:

Student protesters at Princeton performed a valuable public service last week when they demanded that the administration acknowledge the toxic legacy of Woodrow Wilson, who served as university president and New Jersey governor before being elected to the White House. He was an unapologetic racist whose administration rolled back the gains that African-Americans achieved just after the Civil War, purged black workers from influential jobs and transformed the government into an instrument of white supremacy. The protesters' top goal - convincing the university to rename the Woodrow Wilson School of Public and International Affairs and the residential complex known as Wilson College - has drawn heavy fire from traditionalists. But the fact that racist policies enacted during Wilson's presidency are still felt in the country today makes it imperative that the university's board of trustees not be bound by the forces of the status quo.

The Times' editorial about Princeton and the statement by Salovey, Yale's president, have clearly acknowledged - in response to the student protests - that the legacies of segregation remain deeply entrenched within the US academy. These statements also imply that the administrative structures within the universities and the boards of trustees have to become the agents of change responsible for reshaping the cultures of the institutions. It is a timely message given that the longstanding practice of token diversification of the student body and faculty ranks at universities has proven inadequate to the task of creating a culture of inclusion at these institutions. It appears that there has been a failure to understand that tokenism is merely another device designed to indulge in segregation by another name - marginalization.

The student protests of recent months should also remind US political leaders of the Warren court's unanimous Brown v. Board of Education ruling in 1954. That decision repudiated the constitutional imprimatur of segregated education and opened a path for the United States to shed the illusions of race supremacy. Six decades on, the seeds of wisdom offered by Earl Warren and his colleagues seem to have fallen on barren soil.

Cary Fraser is a historian of international relations whose essays/articles have been published in the Caribbean, the USA, Canada and the United Kingdom. His work has explored the international relations of the contemporary Middle East and Persian Gulf, the history of the Cold War, American foreign policy, the politics of decolonization, and the politics of race in the US and the Caribbean. He received his Ph.D. from the University of Geneva and most recently served as President of the University of Belize 2011-2014.

Copyright, Truthout. Reprinted with permission. May not be reprinted without permission. Truthout publishes a variety of hard-hitting news stories and critical analysis pieces every day. To keep up-to-date, sign up for our newsletter by clicking here!