On Wednesday January 6, the library released more than 180,000 of its public-domain items — including maps, posters, manuscripts, sheet music, drawings, photographs, letters, ancient texts — as high-resolution downloads, available to the public without restriction. 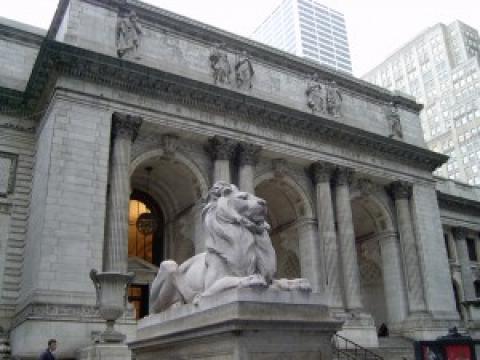 "Ferry and river men. Vicksburg, Mississippi," a 1936 photo by Walker Evans, is one of many images in the NYPL's collection from the Farm Security Administration's Depression-era photography projects.

Forget journeys into the stacks or stints at a library scanner: For more and more of the New York Public Library's collections, access is just a click away.

On Wednesday, the library released more than 180,000 of its public-domain items — including maps, posters, manuscripts, sheet music, drawings, photographs, letters, ancient texts — as high-resolution downloads, available to the public without restriction.

A lithograph of New Orleans, by the artist Henry Lewis and the lithographer Arnz and Co., is among the more than 180,000 public domain items now available for high-resolution download from the New York Public Library.

It's the latest push by NYPL Labs, the library's Internet-oriented tech and outreach team, to make the library's holdings more accessible to the public.

Before the release, many of the items were available to view for free through the library's Digital Collections site, and some could be downloaded at lower resolutions. But in most cases, for a high-resolution image, users would have to make a request and pay a processing fee, a library spokeswoman says. The public domain release includes more than 40,000 stereoscopic views — like this one of female prospectors in 1898. This photo from the Billy Rose Theatre Collection — labeled simply "Macbeth, by William Shakespeare, photo file 'A' " — is among the NYPL's restriction-free downloads. "Muhammad and Abu Bakr are feted by Umm Ma'badah's tribe," from a 16th-century illuminated manuscript depicting the life of the prophet Muhammad.

Now, in addition to the availability of high-res downloads, it's simpler to identify which of the items in the library's digital collections are in the public domain. The library also has made it easier for programmers to access and analyze those files in bulk.

"These changes are intended to facilitate sharing, research and reuse by scholars, artists, educators, technologists, publishers, and Internet users of all kinds," the library says in a statement.

"All subsequently digitized public domain collections will be made available in the same way, joining a growing repository of open materials." An early-20th century photo by Edwin Levick, "Uncle Sam, host. Immigrants being served a free meal at Ellis Island," is part of the NYPL's photography collection.

If it's hard to conceptualize what 180,000 items looks like, NYPL Labs also released a visualization of all the materials, sorted by date, genre, collection or even color. The NYPL's digital holdings include the papers of notable Americans: letters from Walt Whitman, journals by Nathaniel Hawthorne, receipts from Alexander Hamilton -- and George Washington's recipe for "small beer." (A transcription is available here.)

The documents include literary manuscripts, Farm Security Administration photographs, sheet music, papers from Founding Fathers, WPA-era art by African-American artists, the 16th-century Handscrolls of the Tales of Genji, illuminated manuscripts from the Medieval Ages and the Renaissance, maps and atlases, and stereoscopic views, the library says.

The materials can all be viewed and downloaded through the Digital Collections site.

In addition to making public-domain files available for free, the library is actively encouraging people to come up with creative uses for the items. A "remix residency" will offer funding, work space and promotion to people with novel ideas for reusing the library's public domain materials.

In need of inspiration?

NYPL Labs' designers came up with a few projects to get you started — a game based on public-domain mansion floor plans, a comparison of 1911 street photos with 2015 Google Street View images and a trip planner based on a guide to where black visitors would be welcomed in the 1930s-1960s. The NYPL's digital collections include a number of maps in the public domain, like this 1672 world map by Pieter Goos.