Report suggests 'some giant corporations--and their executives--have decided that following the law is merely optional. 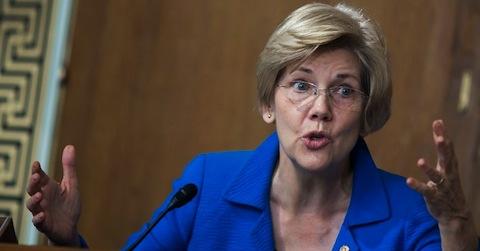 Federal regulators' "limp approach to corporate enforcement, particularly in response to serious misconduct that cost Americans their jobs, their homes, or, in some cases, their lives, threatens the safety and security of every American," , CQ Roll Call

Described as "the first in an annual series on enforcement," the 12-page booklet "highlights 20 of the most egregious civil and criminal cases during the past year in which federal settlements failed to require meaningful accountability to deter future wrongdoing and to protect taxpayers and families," according to a press statement from Warren's office.

That institution "signed up tens of thousands of students by lying about its programs, it saddled them with fraudulent degrees and huge debts," Warren wrote in an accompanying New York Times op-ed published Friday. "Those debts wrecked lives. Under the law, the government can bar such institutions from receiving more federal student loans. But EDMC just paid a fine and kept right on raking in federal loan money."

Other cases outlined in the report include: Standard and Poor's delivering inflated credit ratings to defraud investors during the financial crisis; "The Cartel"—Citigroup, JPMorgan Chase & Co, Barclays, UBS AG, and Royal Bank of Scotland—manipulating exchange and interest rates at the expense of clients and investors; the Upper Big Branch Mine Disaster that resulted in 29 deaths; and the Novartis Pharmaceuticals kickback scheme that cost taxpayers hundreds of millions of dollars and undermined patient health.

"The examples raise the disturbing possibility that some giant corporations—and their executives—have decided that following the law is merely optional," Warren argues. "For these companies, punishment for breaking the law is little more than a cost of doing business."

And they shed troubling light on the state of the U.S. justice system. "Justice cannot mean a prison sentence for a teenager who steals a car, but nothing more than a sideways glance at a C.E.O. who quietly engineers the theft of billions of dollars," Warren said in the op-ed.

What's more, Rigged Justice places blame at the feet of federal agencies and regulators, whose "limp approach to corporate enforcement, particularly in response to serious misconduct that cost Americans their jobs, their homes, or, in some cases, their lives, threatens the safety and security of every American."

The report lambastes the Securities and Exchange Commission (SEC) as "particularly feeble" in this regard:

Not only does the agency fail to demand accountability, the SEC frequently uses its prosecutorial discretion to grant waivers to big companies so that those companies can continue to enjoy special privileges despite often-repeated misconduct that legally disqualifies them from receiving such benefits.

And it scoffs at last year's U.S. Justice Department announcement, known as the Yates memo, in which Deputy Attorney General Sally Quillian Yates vowed to finally crack down on corporate criminals. "Despite this rhetoric," Warren declares, "DOJ civil and criminal settlements—and enforcement actions by other federal agencies—continually fail to impose any serious threat of punishment on corporate offenders."

Rigged Justice is also a commentary on the 2016 election, writes David Dayen at The Intercept.

"The focus on how laws are enforced rather than the intricacies of the law itself carries on a theme Warren has stressed throughout primary season—that personnel is policy, that who you will put in power in those key regulatory positions matters as much as your 10-point plan," he says.

The Hillary Clinton and Bernie Sanders camps — and their allies in the press – have been arguing increasingly harshly over who has the most perfect or most attainable policies. But the real issue, as Warren sees it, comes in installing the personnel to carry out the laws on the books that protect public safety and the economy.

Both Clinton and Sanders have called for stiffer penalties and more aggressive Justice Department enforcement on financial crimes. The Warren report suggests how far we have to go, and how intensely she will be watching developments as they unfold.

Indeed, Warren wrote in the Times: "Legislative agendas matter, but voters should also ask which presidential candidates they trust with the extraordinary power to choose who will fight on the front lines to enforce the laws. The next president can rebuild faith in our institutions by honoring the simple notion that nobody is above the law, but it will happen only if voters demand it."