"He does not have the conservative track record, and I don't trust him," says one Southern Baptist 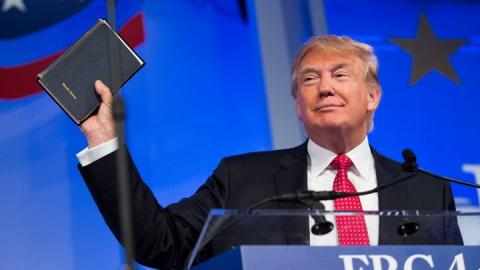 Donald Trump reportedly won 22 percent of the evangelical vote during the Iowa Caucuses.,

Donald Trump lost the evangelical vote to Ted Cruz in Iowa Monday night, shattering the facade that the loud-mouthed, thrice-married casino owner who's joked about dating his own daughter could own the legacy of the Moral Majority.

Cruz won 34 percent of the evangelical vote in Iowa to Trump's 22 percent, according to entrance polls, showing that while Trump and some of the pre-caucus polls may have overstated his potential share of the evangelical vote, his final tally was not inconsequential. Anti-Trump evangelicals, aware the race for the GOP nomination is far from over, are not retreating from their efforts to paint him as a candidate hostile to their interests.

Evangelicals closely allied with the Christian right's political activism are dismayed by Trump's bombast, his lack of biblical literacy and his belated and disingenuous efforts to pander to their concerns, such as abortion and Supreme Court appointments. To them, a possible Trump nomination would cause "hundreds of thousands and maybe millions literally having a crisis of conscience" in choosing whether to vote for Trump or the Democratic nominee, says John Stemberger, president of the Florida Family Policy Council, an affiliate of Focus on the Family.

"I'm mainly concerned about issues and the fortunes of the issues I care about most: the sanctity of life, the definition of marriage and religious liberty," says Denny Burk, a prominent Southern Baptist who teaches at the Southern Baptist Theological Seminary in Louisville, Kentucky. "[Trump's] candidacy seems to be inimical to those things."

The prospect of a Trump nomination alarms national anti-choice groups as well. Just before the Iowa Caucuses, 12 conservative, anti-choice women wrote an open letter to Iowans, highlighting Trump's lack of commitment to banning abortion, or to appointing Supreme Court justices who would overturn Roe v. Wade. "America will only be a great nation when we have leaders of strong character who will defend both unborn children and the dignity of women. We cannot trust Donald Trump to do either," the letter read. Signers included stalwarts of the Christian right, including Beverly LaHaye, who founded Concerned Women for America, one of the first religious right activist organizations targeting women, in 1979, and Marjorie Dannenfelser, president of the influential anti-abortion group the Susan B. Anthony List.

Ruth Malhotra, a 31-year-old former political activist for conservative causes, tells Rolling Stone evangelicals supporting Trump "think they'd be able to influence him if he's elected." But, she says, "they've been duped" — Trump has "done nothing to advance issues important to evangelicals."

"He does not have the conservative track record, and I don't trust him," she says.

But not all evangelicals are exclusively concerned with how Trump lines up with religious right political litmus tests; some are more focused on the ways Trump has left an imprint on the primary race that both diverges from their Christian values and points the GOP in a direction at odds with that of many younger evangelicals. Though they often share religious right stances on abortion and marriage, these evangelicals are also in favor of immigration reform, and they're horrified by Trump's cavalier invective against Mexican immigrants and Muslims.

Caryn, a Latina evangelical living in Texas who does not want her last name used because she fears retribution by Trump supporters, says she first became alarmed by Trump after seeing news coverage of a November rally in Alabama, at which Trump demanded a black protester be removed. The next day, on Fox News, Trump said of the protester, Mercutio Southall, Jr., who was kicked and punched by Trump supporters, "maybe he should have been roughed up." Caryn also cited the forced removal of a Muslim woman wearing a hijab and t-shirt that read, "Salam, I come in peace" from a January Trump rally in South Carolina.

"I don't want to throw out the Hitler reference blithely," she says, but argues there are "parallels."

In the run-up to the Iowa Caucuses, evangelicals with national followings took to their platforms to warn followers of the dangers of a vote for Trump. The pushback became more intense after Trump began boasting of polling data showing him leading among evangelicals, and the endorsements from former vice presidential candidate Sarah Palin and Liberty University president Jerry Falwell, Jr. as the February 1 caucuses drew near.

The Trump critics included stalwarts of the religious right and a growing chorus of voices that reject the decades-old religious right playbook of fomenting fear of the decline of the Christian nation and calling for politicians to spark a religious revival.

Falwell's late January endorsement, in particular, sent shockwaves through Christian media. Joel Rosenberg, a prolific author of apocalyptic fiction and frequent guest on Fox News, offered on his blog 32 reasons why a Donald Trump presidency "would be a catastrophe for America." Stemberger, a nationally recognized leader for his religious right activism in Florida, wrote of "three questions evangelicals should ask about Donald Trump."

"For me, as an evangelical follower of Jesus, the contrast is between putting nationalism first or the kingdom of God first," wrote Michael Brown, an activist and radio host in North Carolina, who last year endorsed Cruz.

Chelsea Patterson, a 25 year-old Hill staffer and Liberty University alum who's supporting Rubio, is also openly critical of the Falwell endorsement. She tells Rolling Stone Trump "looks like a clown" and says she is put off by the fact that he once declared himself to be pro-choice, but now claims to be pro-life.

The "big issue," says Patterson, is that Trump's "personal life does not match up with what the Bible says." She cites his divorces, his "demeaning" statements about women and his ownership of casinos.

On abortion, Patterson adds, "obviously people can change, but on moral issues, in my opinion, unless you have had a change of heart by Christ, you don't flip flop on those issues."

For some Southern Baptists, Moore, who has also been critical of Trump's anti-immigrant rhetoric, has been the "voice of reason," says Malhotra, the former conservative activist.

Malhotra describes herself as "pretty hard-right" and in favor of building a border wall. But, she says, "Trump's policies are unrealistic, they're not going to work, they're not constitutional."

"Banning Muslims, that's the most unconstitutional idea, anyone who cares about religious liberty should be appalled," she says.

Todd Littleton, a writer and Southern Baptist pastor in Tuttle, Oklahoma, says that on immigration, Moore is attempting to lead Southern Baptists in the pews in a new direction, rather than reflecting their sentiments.

"I do believe evangelicals are attracted to" Trump-style anti-immigrant rhetoric, including anti-Muslim rhetoric, says Littleton, "because they are largely fearful people." That fear, Littleton adds, "totally baffles me."

About Iowa, Littleton says, "in an odd sort of way, I think Trump still won," because of the way Trump set the terms of the discourse, and Cruz adapted to it rather than criticized it.

Joseph Sunde, a 30-year-old writer and Rubio supporter, says Trump "has had an influence on the tone" of the primary race, "and it's pretty much a net negative."

Sunde, who blogs for the Acton Institute, a conservative, free-market think tank, says many evangelicals of his generation reject rhetoric of "making America great" and " domination, culture war" — whether infused with religious language, or, in Trump's case, not. Sunde said these evangelicals "believe God created government" but that it should have a limited role to "create conditions for a flourishing society."

But, as highlighted by the evangelical attraction to Trump, and the similarities of much of Cruz's stances and rhetoric, evangelicalism is undergoing its own crisis — if not of faith, of politics. In a way, although Trump has failed at an overtly religious pander, he seems to have grasped what Littleton describes as "the fears inherent in a particular group who tend to have an apocalyptic vision about everything."

"I've all along thought that Cruz is a more palatable Trump to those who are angry," says Littleton, noting that both tap into that fear.

But "it's an ironic move for a Christian person to be motivated by fear," Littleton laments, "when the very sacred text they say they believe actually says love casts out fear."