DNC Rolls Back Restrictions on Lobbyists 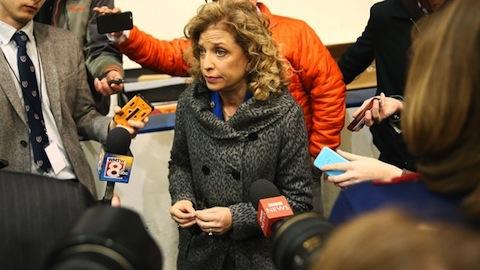 The Democratic National Committee (DNC) has dismantled the last of its prohibitions on receiving donations from lobbyists and political action committees.

The ban has been in place since 2008, when President Obama became the party’s presumptive nominee.

"The DNC’s recent change in guidelines will ensure that we continue to have the resources and infrastructure in place to best support whoever emerges as our eventual nominee,” Mark Paustenbach, deputy communications director for the DNC, told the Washington Post, which first reported the news.

The national committee confirmed the policy change to The Hill but also said that lobbyists and those running PACs are still not able to attend events with the president, vice president, first lady Michelle Obama or Dr. Jill Biden.

The DNC, which is chaired by Rep. Debbie Wasserman Shultz (D-Fla.), opened the door to K Street donations earlier this summer, when it announced that lobbyists and corporate PACs would once again be allowed to make donations to the annual nominating conventions. That change was made primarily because Congress in 2013 nixed federal financing for conventions, depriving the parties of roughly $20 million to pay for the events.

"We are going to change how Washington works," Obama said at the time. Lobbyists and corporate PACs “will not fund my party. They will not run our White House. And they will not drown out the voice of the American people when I'm president of the United States of America.”

While Obama still limits lobbyist participation in his administration, many of the policies he put in place have been eroded over time. Several waivers were provided that allowed lobbyists to work in the administration.

The reversal in policy "is in direct conflict with the American people’s deep concerns about the role of influence-money in Washington," said the group's president, Fred Wertheimer.

"The DNC is acting as if the party is blind to the anger and frustration with Washington that is being expressed by voters in both parties as the presidential nominating process unfolds."

"President Obama should immediately instruct the DNC to re-impose the lobbyist contribution ban he had established," he added.

The issue of money in politics has indeed loomed large in this year’s presidential race.

Hillary Clinton’s Democratic rival, Sen. Bernie Sanders (I-Vt.), has boasted that his contributions have come in at amounts averaging $27 a pop. He says the corporate world and a rich donor class fund Clinton’s campaign.

On the Republican side, business mogul Donald Trump has bragged about how his wealth liberates him from bowing to special interests as he seeks the White House.