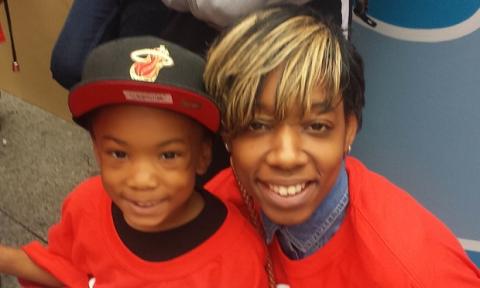 Brendin Smith was only four years old when his mother, Monique Jeffrey, realized her son was no longer wanted at Success Academy. Jeffrey says that administrators at one of the charter school’s Brooklyn locations told her the kindergartener “wasn’t going to make it”. Jeffrey later found out that Brendin was one of 16 students who been placed on the school’s “Got to Go” list, a list uncovered by the New York Times that singled out students that the school wanted to shed.

Success Academy, the largest charter school network in New York City, also has some of the highest test scores. Critics have alleged that the city achieves this in part by driving low performers out.

A Guardian analysis has found that the school system loses children between the third and fourth grade, the first two years of New York state testing, at a rate four times that of neighboring public schools. Success lost more than 10% of its enrolled student population from grade to grade, compared to the average rate of 2.7% at public schools in the same building or nearby during the same years.

The analysis compared Success and traditional public school populations in high poverty neighborhoods and therefore excluded data from one Success Academy site on the Upper West Side where only about 25% of students were classified as “economically disadvantaged”. This school’s relatively well-to-do student population features the only example of a Success Academy class that grew in size from second to fourth grade.

According to Jeff Jacobs, a researcher at Columbia University’s School of International and Public Affairs, chance alone cannot adequately account for these enrollment drop differences. “Within testing years, the enrollment drop rate observed at Success Academy is greater than the enrollment drop rates at next door public schools 70% of the time. Furthermore, in 61% of these cases, this difference is so large that we can reject the hypothesis that it occurred due to random variation in attrition rates, at the 5% significance level.”

Whatever the cause, Kahlenberg said the decline “provides a tremendous advantage to Success that we have be aware of when we compare the test scores”. Not replacing lost students with new ones in later years could provide Success a significant test score advantage, since highly transient students tend to do worse in school.

Brian Whitley, a researcher at Success Academy, said some of this enrollment shrinkage is to be expected since, up until last year, Success did not accept new students after the third grade. In an email to the Guardian, Whitley also argued that enrollment numbers don’t take into account whether public schools are losing even more kids and taking in new ones to replace them. Last March, Success Academy CEO Eva Moskowitz told the Brian Lehrer Show that if Success added new students in older grades, the incoming students’ lower academic preparation would negatively affect the schools’ other students.

To make its calculations, the Guardian pulled data from 25 Success classes that had enrollment numbers from pre-testing grades up until the fourth, and pulled comparable data from public school classes that were either in the same building or one block away from Success Academy sites.

The analysis also found that at sites where the majority of Success Academy’s student populations are from low-income families, classes in the school’s later testing grades served far smaller proportions of students with disabilities (13.2% vs. 27.6% ), students with limited English proficiency (2.4% vs. 16.3%), and poor students (78.7% vs. 92.1%). Such demographic data from many of the earlier grades is not publicly available, and thus it is difficult to determine whether these types of students are dropping disproportionately within Success Academy’s shrinking classes as schools approach the testing years.

Whitley said the disparities in limited English proficiency students and those with disabilities are in part a result of the fact that these students are quickly “integrated” into the general population. “Regarding students in poverty, we have a random lottery that allows kids across the city to apply, so it’s possible that’s because the district as a whole would have fewer poverty students than one of the schools we are co-located with,” he said.

But some former Success parents argue that the high enrollment decline rates and lower high-needs populations are also driven, in part, by a concerted effort to push out students through tactics such as repeat suspensions.

In January, 13 parents filed a civil rights complaint with the US Department of Education’s Office for Civil Rights, alleging that Success Academy discriminated against their children because of their learning disabilities and repeatedly suspended them without due process.

Fatima Geidi, one of the parents in the complaint, said the treatment her son received at Success was, in part, driven by his inability to quickly complete Success’ mock state exams, which ramp up in third grade, the first testing year.

“Third grade was the most serious year of testing ever and they were suspending Jamir like crazy,” said Geidi, who claims her son had received around five suspension by the middle of the school year. “One day on a practice exam, Jamir’s teacher yelled at him. She said she was going to fail him because he wasn’t writing fast enough. After that, Jamir had an anxiety attack and had to go to the hospital. That was it for me. I decided I couldn’t fight them anymore. My son was deteriorating right before my eyes.”

Over the past few years, Success Academy has had suspension rates four times the district average, and seven times the average for public schools.

Last week, footage released by the New York Times raised new controversy for Success when it showed a “model teacher” chewing out a student for being unable to solve a math problem and ripping up the first grader’s paper.

In the face of numerous allegations, Success Academy’s high-profile leader, Eva Moskowitz has remained defiant. After the video was released, Moskowitz, a former city council member, hired a new PR firm and held a press conference, denouncing the newspaper as biased.

In January, Moskowitz brushed off the importance of a federal investigation of the school for discrimination, saying, “If someone makes a complaint, OCR [the Office for Civil Rights] investigates. It means nothing in and of itself other than that a complaint has been made.”

Documents obtained by the Guardian, however, indicate that the federal civil rights office had already decided to initiate its own investigation into Success Academy for disabilities discrimination, months before parents had filed civil rights complaints.

“I wouldn’t say an OCR investigation is something that should be taken lightly,” said John Jackson, a former senior policy advisor in OCR. “There are certain situations where without a complaint the Office for Civil Rights can do an investigation on their own. Typically they do that if they see some data if it looks a little awkward,” continued Jackson, noting that the Washington DC staff sometimes alerts regional offices when they find red flags in schools’ enrollment data.

“They may say, ‘Have you seen this data at Success?’ They’re in tune with the pulse of what’s happening across the country. They read newspapers.”

George Joseph is an education and labor reporter in New York City. Follow him on Twitter at @georgejoseph94.