People across the globe are organizing local actions to decry current priorities that spend $1.75 trillion/year on arms when our planet is in crisis. 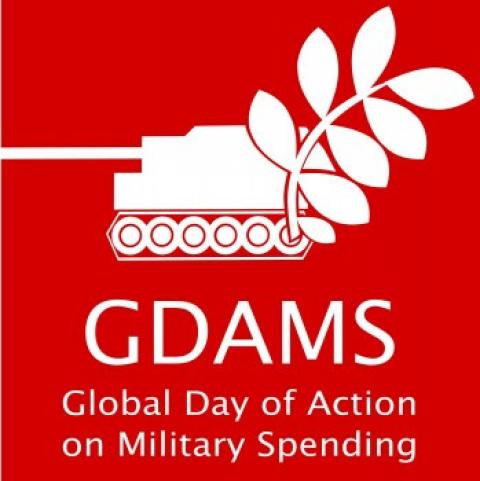 This year, April 5 - 18, have been designated as Global Days of Action on Military Spending (GDAMS), days to campaign against military spending and to promote spending on to life-affirming, sustainable social programs. The International Peace Bureau is coordinating plans at the international level. United for Peace and Justice is part of the U.S, planning group.

April 4 is the anniversary of the assassination of Dr. Martin Luther King, and also of his remarkable speech, “Beyond Vietnam: Time to Break Silence,” delivered in 1967, exactly one year before his death. Identifying the U.S. government as “the greatest purveyor of violence in the world today,” Dr. King powerfully described the inextricable links between militarism, racism and poverty in the struggle for peace and justice. His words were both precautionary and prophetic, providing both a diagnosis and a cure – “a true revolution of values”—for our society’s gravest illnesses, “the giant triplets of racism, extreme materialism and militarism.” And they apply more than ever today.

Consider organizing a public participatory reading of “Beyond Vietnam” in your community as part of GDAMS. UFPJ has prepared a “how to” kit, with everything you need, including the text of the speech. (Whatever else you do, be sure to read or listen to this speech!)

Start planning a GDAMS action in your community now! And let the rest of the world know about it by adding it to the UFPJ events calendar.

Read on for further analysis and please support UFPJ by making a donation today.

The initial meeting for United for Peace and Justice (UFPJ) was in Washington, DC on October 25, 2002.  More than 70 peace and justice organizations agreed to form a new coalition to  coordinate efforts to end the war on Iraq.  Over the past ten years UFPJ grew to over 1400 member groups all around the world working on a broad range of issues.   Over this time we have turn public opinion around to oppose  both the wars in Iraq and Afghanistan.

The election of Barack Obama as  U.S. President followed by an economic crash meant we needed to re-organize.  UFPJ evolved from a coalition with a staff of seven and an office to an all volunteer network, coordinated by people across the country.   (To learn more about our work see our  list of accomplishments in the history section.)

Today, UFPJ continues to serve as  a network  of hundreds of peace and justice organizations around the US and world.  Together we are working to end war and oppression, shift resources toward human needs, protect the environment and promote sustainable alternatives.    Our long-term goal is to grow a culture of justice, peace, equality, cooperation and respect.  We value diversity and respect the earth. We encourage member groups and individuals to engage in wide range of activities from educating their elected officials and the public to public witness actions, protests, street theater, nonviolent direct action and mass mobilization.

UFPJ also hosts numerous issue list serves for activists around the country to coordinate work and share ideas and resources and often coordinates conference calls for strategy among member groups and other activists.