CSPG's Poster of the Week honors Internatio­­­­­nal Women's Day by commemorating Berta Cáceres, a well-known indigenous environmental leader in Honduras who was assassinated in her home recently. 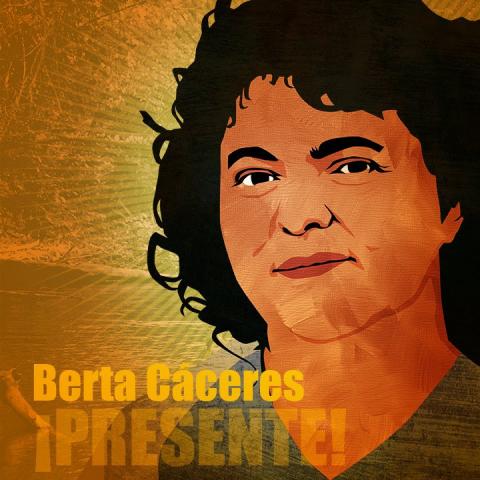 Berta Caceres
Design Action Collective
Digital print, 2016
Oakland, CA
CSPG's Poster of the Week honors Internatio­­­­­nal Women's Day by commemorating Berta Cáceres, a well-known indigenous environmental leader in Honduras who was assassinated in her home last week. Cáceres is the 110th environmental activist to be killed in Honduras since the U.S. supported coup in 2009, which overthrew Manuel Zelaya, the democratically elected president.
Gustavo Castro Soto, a Mexican activist and environmental leader, survived after being shot twice by the same unknown gunmen.  As the only witness to Cáceres' murder, Castro's life remains in danger as the Honduran government is detaining him and not allowing him to return to his native Mexico.
Cáceres was assassinated less than a year after having received the prestigious Goldman Environmental Prize, which is awarded to grassroots organizers working to protect the environment. Cáceres had led a decade-long movement against a project to build the Agua Zarca Dam along the Gualcarque River. While international law requires that indigenous groups be consulted on projects affecting their land, the Lenca people did not give consent to the building of the hydroelectric dam, which would threaten the group's resources and livelihood.
Cáceres's murder has sparked international outrage, and many are holding the Honduran government responsible. The Inter-American Human Rights Commission (IAHRC) had contacted the Honduran government asking that precautionary measures be taken to protect Cáceres, who had received numerous threats against her life and had recently denounced the murders of four indigenous leaders of her community. The IAHRC had also inquired as to why the state had not yet began an investigation into the threats against her.

Honduras currently has the highest homicide rate in the world, which increased by 50% between 2008 and 2011.  Veteran feminists enamored with Hillary Clinton should remember the 2009 Honduran coup as one of her accomplishments as Secretary of State.  Clinton has never disavowed the coup, despite the ongoing escalation of violence and instability in Honduras.

IACHR Condemns the Killing of Berta Cáceres in Honduras