I’m a Peace Activist in Brussels. Here’s 5 Things You Need to Know About the Attacks.

Today’s terrorist attack in Brussels is an unspeakable tragedy, and the victims should never be forgotten. However, seeking vengeance through a militarized response will only create more terrorists. 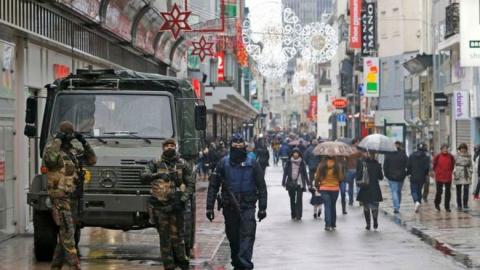 Armed police and soldiers on the streets of Brussels , Reuters

Today’s terrorist attack in Brussels is an unspeakable tragedy, and the victims should never be forgotten. However, seeking vengeance through a militarized response will only create more terrorists.

As a citizen of Belgium and activist in Brussels, there are 5 things everyone should bear in mind:

1. A massive amount of soldiers on the streets does not make you safe

The response of Belgium following the Charlie Hebdo and Paris attacks in France was to put thousands of soldiers in the streets. Despite this, and massive for intelligence services, two of the most obvious targets for terrorists, an airport and the metro, were hit in Brussels. It can only be called an utter failure on their parts, both in the strategy and the response they adopted to “defeat terror.”

This military presence is to reinforce the idea that the state is here to protect you and your well-being, which in fact is wrong on many levels. The military works to protect corporate interests first. As activist Ewa Jasiewicz puts it, “increased presence of police in public places to ‘counter terrorism’ is theatre.”

2. They do not hate us for our freedoms

The racist rhetoric of “they do not like life as much as we do” is utter nonsense and needs to be carefully deconstructed. When the killers embarked on a path to death when they woke up this morning, the sun was shining and the sky was blue for them too. The terrible crimes they committed made sense, to them, to their twisted vision of the world. I struggle to believe that anyone could kill another human being for fun, for the sake of it.

Their journey from disfranchised youth to murderous terrorists is one that we need to study, seriously, step-by-step, to move forward and hope for a better future for society in its whole.

3. Prison does not cure people — quite the opposite

While we do not know yet the profile of the Brussels terrorists, we know that the Paris attackers’ path from small-time delinquents to mass killers follows the same pattern. Their extreme and fast process of radicalization came through prisons, not mosques. They entered small crooks and came out radicalized and transformed. It is time for us to address what Angela Davis calls the prison-industrial complex. The proof is very obvious — prisons definitely do not “heal” people or help them re-integrate into a society that has already failed them.

4. To stop terrorism, you have to stop participating in it

If you look at what happened in France and Belgium, if you study all the footage and read all the media reports and analyses, you will find out that most of them focus on “security,” “militarization,” “hitting back,” and “war.” Only a few are concentrating on what the terrorists said or wrote. Why did they do it? What did they say while doing it? If you read these, which you won’t find easily by doing a Google search, you will realize that all the attackers are talking the same language.

The men who carried out these attacks were politically educated out of the destruction of Iraq, the invasion of Afghanistan, the drone bombings in Pakistan and Yemen, the torture of Guantanamo Bay and Abu Ghraib, and the colonization and occupation of Palestine. To make it shorter, they, mostly identify as Muslims, and they were horrified by the ideological war of the West against what it wrongfully calls “the Muslim world.” This is the main motivator behind the men of ISIS becoming killers. “Your wars, our deaths” became a slogan after the Paris attacks. It might not be totally accurate, and we definitely cannot simplify things, but there is a lot of truth in it.

5. Governments know how to defeat ISIS, but prefer not to do anything about it

“We are going to go after them,” Obama said a couple of hours after the terrorist attacks. Really? When?

We know, for example, that the real people fighting ISIS at the moment are the Kurds in Kobane and other cities. We know that helping and supporting them, while cutting the route of ISIS’s oil to Turkey, would deal a huge blow to the so-called Islamic State. Are we doing it? Not at all.

Supporting Turkey, a crucial actor in this whole story with Machiavellian policies on the ground, is a major factor in the ongoing violence. We also know the role that Saudi Arabia, the most repressive state in the world, plays in the region, through its funding of Wahhabism — the most radical and dangerous interpretation of Islam possible. Rather than doing something against the spread of Wahhabism, the West is enabling it. France, for example, just gave Mohammed Ben Nayef — the future king of Saudi Arabia — its highest honor, the “legion d’honneur,” a few days ago.

These constant double standards and the lies of our governments need to be challenged. They create rancour and hate.

Frank Barat is the former coordinator of the Russell Tribunal on Palestine. “Freedom is a Constant Struggle,” his book with Angela Davis, is out now. He tweets @fbarat1