April 5, 2016 Robert J.S. Ross portside
Printer friendly
It is Never Too Early to Think Ahead - A response to Ethan Young Published April 5, 2016 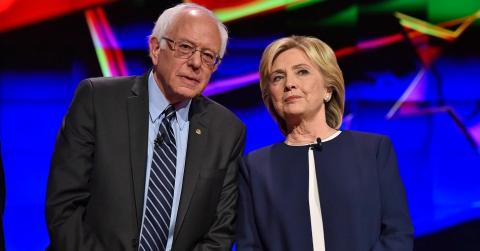 There are numerous possible outcomes of the Republican Presidential contest, including the most probable and apparently most threatening -Trump. After him comes the more modulated voice of Ted Cruz advocating just as vile, and in some cases worse policies. Those touted as mainstream or moderate in the event of a brokered convention would each be the most right-wing nominees in a century (e.g., Kasich and Ryan). This is the reality that confronts progressives - the Sanderistas and the self-defined more pragmatic supporters of Hilary Rodham Clinton. As I failed to make clear in an earlier consideration of this problem, both groups of supporters had best be serious about the post-nomination contingency of uniting with their erstwhile opponent. This not just a Sanders problem - it is a Clinton problem as well. It seemed to many readers I was mainly addressing Sanders supporters, probably as a result of my framing the unity problem as one addressed to progressives. Some read the urgent call for unity as a call for Sanders supporters to capitulate.  It ain't so.

Ethan Young, in a well-considered response properly claims the current situation as unprecedented. For Portside and elsewhere Young notes the "breakthrough" of a socialist getting more votes than ever in US history. He does not note, but could have, that the Sanders finance machine and information sharing represents a maturing of the impact of digital technologies on campaigns. Just as the internet has been the "great equalizer" among libraries, so too, the Sanders fund-raising apparatus - in the total absence of legislation - has had a democratizing effect on our world. Young is right to note that for a while at least we will have a "Sanders wing" in the Democratic Party.

Young rejects the urgency of creating a unity strategy against the Republicans. He does this on at least two grounds. In the first instance he notes that characterizing Trump as fascist is, in summary, overheated. Chief among the theories of fascism has been the proposition that, as Franz Neumann put it, fascism "emerges from the need of the holders of economic power for a strong state which however must not be subjected to the control of the people." Young does not think the "drastic" surrender to fascism is needed by the "money guys". The claim - even by such a mainstream figure as Robert Reich - that Trump is a fascist is not mine, though the analogy of morbid consequences is one I share. Young's second point is relevant: there is so little organization, including the absence of a paramilitary force, that Trump's campaign bears little resemblance to the moments of fascist emergence in the period between the 20th Century's two World Wars.

So let's say the claim of fascism is either premature or technically not proved. Let's stick to the facts rather than the labels: he encourages and gets violence from his supporters in a country where many civilians, including and notably racists and militant rightists, are armed to the teeth and police departments and other legal agents of the state are apt to be closer in temperament to his supporters than to either the left or to people of color.  The world will probably continue to evolve on its axis in the event of a Trump or Cruz Presidency, but I don't want to risk my freedom, or the lives of 11 million undocumented brothers and sisters, or those who insist their lives matter on the slender reed of whether the purveyors of Big Capital would go along in order to get along with the crazies.

Young puts low priority on unity because of another calculation he makes about the prospective general election. Projecting a Clinton nomination Young depicts a Republican party so riven ("wounded" he says) that a Clinton election "will not be the result of support from the Sanders camp," i.e., it is not necessary to seek a post-nomination accord. Passing by what Sanders might do to effect such a deal, Young correctly notes that Clinton would not be naturally inclined to make concessions to democratic socialists.

It is true that head-to-head polls now show Clinton beating Trump handily; and, by the way, Sanders beats him in these polls by a larger margin.

However, I have been a "political person" for 55 years, a campaign professional for four, and a close observer of polling for thirty. And I remember the evaporation of Mike Dukakis's seventeen-point lead as of July 1988 over Bush the Elder. There are few things I know for sure, but one of them is that polls this far out "ain't worth a bucket of warm spit"-which is what John Garner told Lyndon Johnson about the vice-presidency.

Young's observations about the Republican disarray, his notes on the rising of the "Berniacs" and his concern for a post-election popular movement - all these I share. While he appears to think a Clinton victory is probable (as does Nate Silver of fivethirrtyeight.com), Young nevertheless interprets an appeal to unity as a "folding up of banners". By contrast, my conviction is that whoever is nominated, both candidates and their thoughtful supporters, need to think about principled ways of obtaining the support of their erstwhile opponents. My emphasis on this is partly because the stakes are high, as I've noted.  But there is another technical-demographic dynamic in my calculation.

Trump is provoking historically high Republic primary turnout. As many have noted, high turnout in primaries is not necessarily correlated with general election victory. Nevertheless, the key to disruptive elections in the past has been unlocking new voters. Roosevelt and Obama did this; Sanders and Trump are doing it.

What is notable about Trump's performance is his appeal to white voters with low levels of education who have historically been a low turnout group in all elections. Trump is engaging some of the disengaged.

One reader responded to my concerns with a view not explicitly endorsed by Ethan Young, but implied by his concern about folding banners. This reader said it is "too soon" to go on the defensive; the fight is not over. Let fly the banners of Justice, for sure. But in this world it is never too soon to make plans and never too early to have honest talk with supporters. Among my most distasteful experiences of electoral politics has been the consistency with which campaign managers and inner circles of campaign strategy mask realities from the troops in the name of maintaining effort and morale.

Concerning principled bases for unity: these must include items that are meaningful to the base supporters of both candidates; that make good sense in public policy terms - and crucially, for a winning Democrat - put forth a basis for the 2018 Congressional elections. While Clinton may be right that Sanders' program could not pass the Congress we have, it also true that even Clinton's incrementalism would be stymied by the current obstructionist alignment. So, a Democratic President should start the next campaign on January 21, 2017. Here are the barebones of my unity proffer:

*   Progress toward national $15 minimum wage;
*   Legislation and or support for an amendment to neutralize the Citizen's United decision on campaign finance;
*   Address the debt burden for higher education;
*   Revise the labor standards enforcement in NAFTA, CAFTA, TPP or withdraw;
*   Bring back a version of Glass-Steagall;
*   Push for a public (expanded Medicare) option in ACA;
*   Raise tax rates on the one percent.

This ought to be easier than KPD/SPD joint action in 1932. But already I can hear drumbeat of ill-considered rhetoric. To his credit, Young does not contend that Hilary is just as bad as the Republican wreckers.   Others do. They should mind the historical record as should all of Bernie's supporters - we could do far worse than a President who has been evasive about global labor standards in treaties. And as for the Clintons:  Bernie talks a bigger game, sure. But you can't get somewhere if don't know where you want to go. Amid the thicket of the Beltway, she could use a pilot.

And oh, by the way: I loved being called an "original gangsta" - after I looked up what it meant.

[Robert J.S. Ross http://www.clarku.edu/faculty/facultybio/rross is a Research Professor of Sociology and
The Mosakowski Institute for Public Enterprise, Clark University.