From Fight for $15 to the Verizon Strike: We Must Protect Workers' Right to Walk Outut

Strikes can be legally threatening and socially disruptive. But in the absence of any serious, social efforts to change the economy, it is perfectly reasonable for workers to defend their interests. So long as the economy is as radically unequal and oppressive as it is, workers have a right to strike. They have that right just the way anyone facing oppression has a right to resist it. 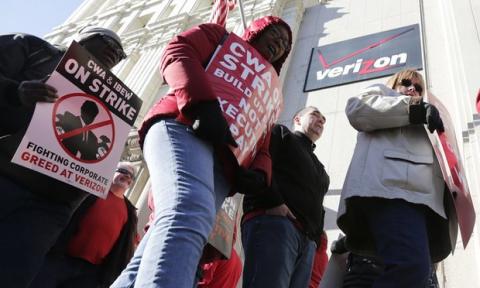 The Verizon strike is one of the biggest in years, and comes on the heels of several other significant strikes. , Mike Groll/AP

Given the new politics of inequality, there is every reason to think that strikes will become more common. So long as the economy is as radically unequal and oppressive as it is, workers have a right to go on strike. This is an uncomfortable thing to say because of what it means to defend that right.

The 40,000-person, Verizon strike on Wednesday and the Fight for $15 strikes on Thursday are just the latest examples of worker walkouts. The Verizon strikers are protesting about a host of issues, including the company’s demand for reduced compensation, loss of job security, work relocations and schedules that would require workers to spend months at a time away from their families.

Verizon makes these demands despite posting $39bn in profits since 2012. The biggest strike in years, the Verizon strike has attracted the welcome support of presidential hopeful Bernie Sanders and comes on the heels of other significant strikes.

But what is uncomfortable here? Doesn’t the law already recognize the right to strike? Though American law does recognize some kind of right, as legal scholars like James Gray Pope and Ahmed White have pointed out, it is so surrounded by legal obstacles that it is difficult to exercise. Employers often may permanently replace workers during the strike, which makes it nearly impossible to stop production. Stopping production is the central point of a strike and the ultimate reservoir of worker power.

Employers may threaten to move a plant entirely if workers strike. Employers are allowed, after a certain time, to use replacement workers to decertify the striking workers’ union. Sympathy and solidarity strikes are also generally illegal, cutting deeply into the ability of workers to support each other. The law is so stacked against workers that sometimes employers try to spark strikes so that they can take advantage of what the law permits. These are unjustifiable labor laws and it is fair for strikers to break them. But that means that a proper defense of the right to strike means supporting potentially mass acts of civil disobedience.

This is not an abstract concern. For instance, the city of Chicago is cravenly suing the Chicago Teachers Union for its one-day strike of a few weeks ago. Verizon workers face the problem of having no legal means of forcing Verizon to negotiate with them, since they can’t prevent replacement workers from taking their jobs for the duration of the strike. The most easily replaced workers, those in high labor supply, low-pay jobs, like fast food and retail, are the ones who have the hardest time going on strike and yet they are the ones most justified in doing so.

Defending the right to strike doesn’t just mean accepting some law-breaking. Strikes can be socially disruptive and incredibly inconvenient. The Verizon strike will disrupt phone and internet service, the teachers’ strikes meant thousands of kids went without school.

But there is good reason for workers to want to fight back. The rich are getting richer, median wages are stagnant and the poor have seen real declines in wealth. This is not just a matter of wealth and income but also personal freedom. The typical worker has little control over her schedule or work conditions, let alone over major company decisions about investment and hiring that affect her job. Workers are expected to obey the commands of their bosses and they live with the constant threat of unemployment. Especially when workers don’t have countermeasures, like the strike, the standard employment relation is one of subordination.

Strikes can be legally threatening and socially disruptive. But in the absence of any serious, social efforts to change the economy, it is perfectly reasonable for workers to defend their interests. So long as the economy is as radically unequal and oppressive as it is, workers have a right to strike. They have that right just the way anyone facing oppression has a right to resist it.

If anything, we should hope that the incipient, broad-based organizing that we have begun to see inspires others to join. What has been missing in the past few years is not clever solutions to economic problems, but the organization and will to change things. As one Verizon steward from New York said to me: “There is just no substitute for a militant membership.”