"If a hugely profitable corporation like Verizon can destroy the good family-supporting jobs of highly skilled workers, then no worker in America will be safe from this corporate race to the bottom," Trainor said last week in a statement that announced the strike. 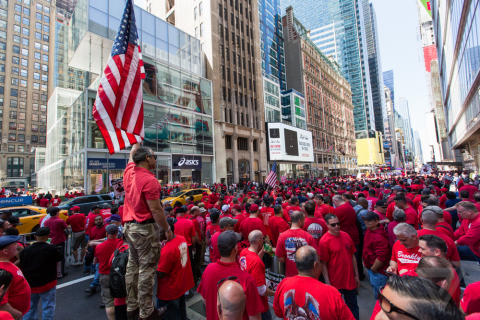 Thousands of Verizon workers are in the middle of a strike across the northeast United States, and today members of two unions — the Communications Workers of America (CWA) and International Brotherhood of Electrical Workers (IBEW) — took to midtown Manhattan to keep the work stoppage going.

The striking workers chanted, whistled, and used noisemakers inside a barricade that occupied the entire bus lane on 42nd Street between 6th Avenue and Broadway. A stage was set up at the front of the queue, just around the corner from Times Square. Dennis Trainor, the vice president of CWA District 1 (which represents Rhode Island, Vermont, Maine, New Hampshire, Massachusetts, Connecticut, New Jersey, and New York) led a rotating cast of speakers.

"They try to make it look like we're the greedy ones," a hoarse Trainor yelled into the microphone. "We're not ashamed of our average $74,000 [salary], or the benefits that we have. We earned them!"

The striking workers mainly deal with landline operations and FiOS installations, and the dispute centers around the way Verizon has treated these employees. Verizon has been outsourcing call-center jobs and pushing workers to relocate across the country for months at a time, the unions say, all while the company increases its focus on its wireless business and continues to push self-serve digital customer service.

"If a hugely profitable corporation like Verizon can destroy the good family-supporting jobs of highly skilled workers, then no worker in America will be safe from this corporate race to the bottom," Trainor said last week in a statement that announced the strike.

The strike is new, but the dispute is old

These issues have been on the table between the two sides since the workers' contracts expired in August of 2015, and today Trainor continued to enumerate what the two sides are at war over. Trainor said Verizon is trying to remove job security from the negotiations, as well as diminish the company's accident disability plan and retirement benefits. "So you can see why we don't want mediation," he shouted. "The company is making 'yooge' profits," he continued, echoing Bernie Sanders' affectations. He then celebrated the fact that Sanders walked with the striking workers earlier in the day.

Today, the CWA and IBEW members and supporters were, at times, very loud and angry, but the mood was light. Tour buses and trucks (including at least two FDNY firetrucks and an ambulance) honked horns and waved in support. The most heated exchanges occurred in the middle of the block, where some of the strikers found themselves directly in front of a Verizon Wireless store. Every person who went in or out of the store was met with scores of boos, but the tension calmed each time someone stopped to ask the workers why they were striking. (The store largely remained empty, and the employees remained inside.)

It's unclear how long the strike could last, but there are signs that it will stretch on for a while. Bob Mudge, Verizon's president of wireline operations said in a statement that the company has "trained thousands of non-union Verizon employees to carry out virtually every job function handled by our represented workforce — from making repairs on poles to responding to inquiries in our call centers."

For more photos of the demonstration go to Verizon Strike