Nine months ago Birmingham became first city in the Deep South to raise the minimum wage, then saw it overturned by law described as 'a slap in the face' 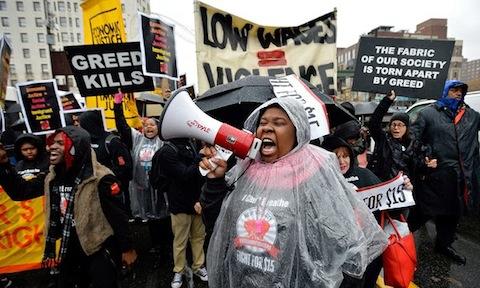 Workers in Harlem at a minimum wage rally. While New York and California have passes laws to raise the minimum wage to $15, Alabama's is stuck at $7.25.,Justin Lane/EPA

Fast-food workers from Birmingham, Alabama, are suing their state legislature after it passed a law that put a stop to their expected pay raise.

Nine months ago, the workers scored a major victory as Birmingham became the first city in the deep south to pass a law enacting a higher minimum wage. At the time, the city council agreed to increase the local minimum wage from $7.25 to $8.50 by July 2016 and to $10.10 by July 2017. The victory was short-lived as the state legislature passed a law earlier this year, prohibiting cities from increasing their local minimum wage, voiding Birmingham’s ordinance.

On Thursday, Birmingham fast food workers, Alabama’s chapter of the National Association for the Advancement of Colored People (NAACP) and the Greater Birmingham Ministries filed a federal civil rights lawsuit arguing that HB-174, passed two months ago, is tainted “with racial animus”. Most of the Birmingham workers who would have received a pay hike in July were African American, according to Richard Rouco, one of the lawyers representing the plaintiffs.

“Despite working hard for the same restaurant for three years, I’ve only gotten one 25-cent raise,” said Marnika Lewis, 23, one of the plaintiffs in the case. She works at Moe’s restaurant, earning $7.75 an hour. “I can’t afford to feed my son or heat my home on the $270 I’m paid each week, so I have to rely on public assistance just to scrape by. If the legislature and governor hadn’t illegally stolen my raise, I would have had money to pay for my son’s child care.”

Another plaintiff in the lawsuit is Antoin Adams, 23, who works at Hardee’s and earns $7.25 an hour.

Adams said he earns little more than $10,000 a year, before taxes. At the moment, he cannot afford to get his car fixed and often has to decide between spending money on food or treating his chronic asthma conditions.

“I want to go to college, but on $7.25 saving up is impossible. I’d love to be a computer technician, and a raise to $10.10 sure would have helped me along that path,” he said. “The state stole my raise.”

In the wake of congressional inaction on wages, the Obama administration has come out in support of states and cities raising their minimum wage.

“Since the president called for an increase in minimum wage in the State of the Union 2013, 18 states have raised their minimum wage so we are very encouraged by what is happening,” US deputy labor secretary Chris Lu pointed out in April. “Not only states, but cities as well have taken the lead on this action.”

Most recently, both California and New York passed laws that would see their minimum wages go up to $15 an hour by 2022. Although Obama had praised the two states for their efforts to raise wages, publicly he has yet to endorse a $15 federal minimum wage. Instead, he has thrown his support behind a proposal introduced by congressional Democrats, which would raise the federal minimum wage to $12 an hour by 2020.

Former secretary of state Hillary Clinton has also publicly declared her support for raising the federal minimum wage to $12 an hour even as her rival for the democratic presidential nomination Bernie Sanders threw his support behind a $15 minimum wage.

Most recently, however, Clinton has implied that she would not be opposed to a nationwide $15 minimum wage if there was a widespread support.

“I hope the rest of the country will catch up with New York and California,” she said while speaking on a panel on equal pay earlier this month. Increasing the federal minimum wage would benefit women as they account for two-thirds of minimum wage workers, she said.

According to Rouco, the plaintiffs’ lawyer, if Birmingham were allowed to raise its minimum wage to $10.10 an hour, it would result in a raise for more than 40,000 workers, most of whom are African American. About 74% of Birmingham’s residents are black and almost third of them live in poverty.

The state’s attempt to block a minimum wage increase in Birmingham is also an insult, local leaders and officials said.

“It’s really a slap in the face,” said Scott Douglas, executive director of Greater Birmingham Ministries. “And the reasons they gave for doing it? Like: ‘Oh, Alabama needs a unified minimum wage. We can’t have patchwork minimum wages’. When they are not lifting a finger to raise any wages across the state? It was like somebody slaps you and then winks. It was that kind of an insult.”

Rouco said they are “firmly optimistic” about the outcomes of the lawsuit, adding that the firm is not in the habit of filing lawsuits they don’t expect to win. The aim of the suit is to get a verdict saying that the state law banning cities and towns from increasing their minimum wages cannot be enforced. In the case of such a verdict, he said, the Birmingham new minimum wage would go into effect immediately.