books It's Only Words

In Banking on Words, Arjun Appadurai argues that the 2008 financial crisis was, in essence, a failure of language. Narendar Pani finds that argument somewhat overstated, while at the same time acknowledging this book's "path-breaking" analysis of the role language has come to play in the way markets behave and are managed. 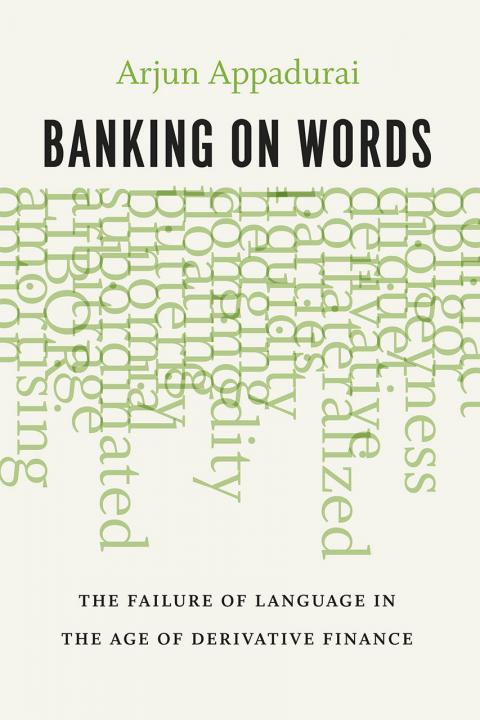 Banking on Words: The Failure of Language in the Age of Derivative Finance
by Arjun Appadurai
University of Chicago Press
ISBN: 9780226318776

Arjun Appadurai begins this slim and yet dense volume with the unusual claim that ‘the failure of the financial system in 2007-08 in the United States was primarily a failure of language’. It was the new role of language in the marketplace that made it possible for the more easily identifiable flaws, like irresponsible risk-taking and weak regulation, to cause the crisis. The route Appadurai takes to lay out his argument is not for those who like no more than an occasional dip in the social sciences. He takes you through the deep end of sociology with Weber and Mauss, picking up interesting but long-ignored concepts like McKim Marriott’s version of ‘dividuals’ along the way. For those who withstand the arduous journey, there is the reward of a much-needed multidisciplinary approach to understanding a crisis whose effects are still being felt around the world.

Underlying the multiple levels of Appadurai’s extended essay is an argument that builds on the idea of a promise. He argues that a contract is essentially a promise to carry out a set of actions. For instance, if the price of gold and that of a mutual fund move in opposite directions, it is possible to cover for any loss in gold by a promise to exchange units of the mutual fund for gold. The risk that any decline in the price of gold will not be fully compensated by a rise in the price of units of a mutual fund can be, in turn, covered by another contract. The financial markets then get dominated by derivatives, which are assets whose values are based on that of another asset, which may well be a derivative itself. In this world where promises are based on other promises, the wagers on future prices become ‘indifferent to individual risk preferences, to price volatility, and even to the prior history of the prices for the asset in question’ (p 12). Appadurai argues that at this point the derivative form becomes virtually a linguistic form. As long as there are buyers for the new promises that are being made, the system generates its own momentum. But there comes a time when contracts based on promises find no new takers and cannot grow any further. And when there are no buyers for new contracts, the entire system collapses.

This explicit recognition of the role of language in financial markets provides a much-needed insight into some of the less understood processes that are hidden behind the veil of numbers in the world of finance. These processes have an impact that go well beyond the immediate effects of the financial crisis. As Appadurai points out, inadequate understanding of the linguistic dimension of financial markets has led to popular discourse often confusing possibility with probability. Financial scams can be generated by presenting plausible stories as probable ones. Emails purportedly from the wives of African dictators who need your help to access vast amounts of money are just the lower end of this spectrum.

Language is also used extensively to attract new entrants that are needed to keep the financial markets growing. This exercise could be used to tap into groups of people, like the poor, who would not traditionally be associated with the world of finance. Indeed, it is not difficult to share Appadurai’s belief that ‘microcredit…can be shown to be a space where small-scale savings among the poor are potentially being drawn into large-scale financial profit-making spaces, using the ethicising discourses of empowerment, trust, and social-capital’ (p 25).

In the midst of these significant insights, though, it is difficult to brush aside the possibility that by placing the linguistic dimension above all other factors Appadurai may well be overstating his case. The larger financial crisis in the U.S. did have its origins in the sub-prime crisis in the housing market.

With loans being given to sub-prime borrowers, there was always the risk of failure. When the spurt in housing prices led to the same sub-prime borrowers being given second mortgages the risk grew even further. When some of them could not keep up with the payments on their mortgages, their property was put up for sale. This raised the supply of housing, setting off a crash in that market, bringing down the huge derivatives based financial edifice with it. Appadurai acknowledges the crash in the housing market as the point where the music stopped, but is otherwise unwilling to provide it its central role in the financial crisis.

It is also possible to argue that while much of the specifics that Appadurai lays out are undoubtedly new, the larger processes have been seen before. The disconnect between the financial markets and the production of goods and services has marked earlier financial crises as well. This is in fact a prominent theme of most analyses of the Great Depression of 1929. While Appadurai does acknowledge some of the connections with the past there is a tendency to underestimate their commonality with the most recent financial crisis.

This contributes to his exaggerating some of the consequences of the latest crisis, going so far as to write the obituary of the contract. And in the place of the contract-led financial world, he would like to see an alternative conception of the ground from which it would be possible to beat global finance at its own game.

By laying itself open to the charge of overreach, Appadurai’s Banking on Words does itself unnecessary harm. It diverts attention away from the path-breaking strides the book takes towards recognising the linguistic in the financial.