American Ugliness: Queer and Trans People of Color Say Not in Our Names

Mateen didn't need to look to ISIS for inspiration for his attack on Pulse, a LGBT nightclub that he targeted on its "Latin Night," when it was populated primarily by queer and trans Latinx and Black people. The homophobia, transphobia, racism, sexism and violence that Mateen reportedly exhibited on many occasions exist in abundance right here in the United States, where Mateen was born and raised. 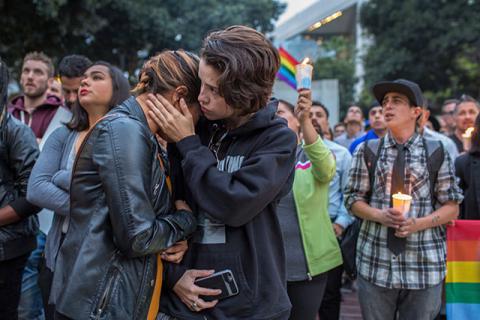 Kassandra Shore and Candice Darden console each other while gathered with thousands of mourners at a vigil for the victims of the Pulse nightclub shooting, outside City Hall in Los Angeles, June 13, 2016. , Monica Almeida/The New York Times

I had bad dreams Sunday night. I'm not surprised. A roommate broke the news of the Orlando shooting to my partner and me on Sunday morning; from then on my day was dominated by shock, anger and grief. I was almost surprised when I finally managed to calm down enough to lie down in bed, close my eyes and be still. Such a day does not make for sweet dreams.

In my dream, my partner and I had just gotten off a plane and were walking through an eerily empty airport. The people around us were staring up at TV screens showing clips that looked like footage from the Persian Gulf War that had terrified me as a small child. But I knew these were images of new bombings in Iraq -- bombings aimed at ISIS (also known as Daesh) but resulting in the same massive loss of lives that has characterized the wars I've seen the United States wage in my lifetime.

My dream self knew right away that the bombings were in retaliation for the shooting at the Pulse nightclub in Orlando. I grew enraged. I began to yell at the people around us: "This is horrible! The United States is horrible! This is the worst country in the world!" And then I awoke.

As of now, no new wars have been declared, though in this world of war without end it becomes difficult to distinguish between the end of one conflict and the beginning of the next. That said, it took no time at all for the main parties' presidential candidates to begin rattling their sabers at the usual specters of ISIS and "radical Islamism," as Hillary Clinton put it.

Even Bernie Sanders jumped on the bandwagon, using the tragedy as a moment to call for the destruction of ISIS, despite the fact that by all appearances Omar Mateen was a lone wolf who seems not to have understood the differences between the ideologically opposed Islamist military organizations -- ISIS, al-Qaeda and Hezbollah -- that he admired. While police assert that Mateen mentioned ISIS in his 911 call before the massacre, there is no evidence that he was trained, directed or at all in contact with ISIS or any other foreign militias or radical organizations; all he got from them was inspiration.

But Mateen didn't need to look to ISIS for inspiration for his attack on Pulse, a LGBT nightclub that he targeted on its "Latin Night," when it was populated primarily by queer and trans Latinx and Black people. The homophobia, transphobia, racism, sexism and violence that Mateen reportedly exhibited on many occasions exist in abundance right here in the United States, where Mateen was born and raised.

Black queer writer adrienne maree brown speaks to this in her reflections on what happened in Orlando. She first cites an older piece of hers -- written fittingly on the 10th anniversary of 9/11 -- in which she speaks of the "bloody birthright" with which Americans are born:

She goes on to reflect that as "a post-nationalist american-born revolutionary," she and others who share her hopes and visions of a better world "need to do the hard work of taking on america, and shaping the future that can grow from this place":

we are born with our dignity
we look beautiful weeping, waging love
when scared we sashay the tar streets
press together in the steaming darkness
sweating out freedom songs, love songs
this
is america

Yes, this is America. Omar Mateen's access to guns, his idolization of cops and the New York City Police Department specifically, his racism and his physical abuse of his ex-wife are all very American. But perhaps none of the revelations of the complexity of Mateen's rage and hatred is more American than the hatred he may have directed at himself. On Sunday afternoon, I spotted the headline "Drag Queen: Anti-Gay Terrorist Omar Mateen Was My Friend," the first of a series of articles and revelations that indicate that Mateen might have been somewhere on the queer spectrum himself; that he was not always violent and antagonistic toward queer and trans people; that something had changed in him. Immediately upon reading that first headline my thoughts jumped to the 1999 film American Beauty, in which a retired Marine Corps colonel beats and kicks out his teenage son for perceived homosexuality, kisses Kevin Spacey's character in a moment of weakness and self-revelation, and then removes a gun from his collection and murders the object of his affection.

Yes, this is indeed America.

But we who are born with the bloody birthright of being American have a choice about what we take from the tragedy in Orlando and where we go from here. Our so-called political leaders spout the expected lines about radical Islam, but Latinx and Black queer and trans folks and our allies are choosing a different path. Queer and trans people I've spoken to, queer and trans organizations, and Latinx and Black folks are gathering together for comfort, community and solidarity as we grieve and mourn the dead.

In my experience, we're not gathering because we're more afraid of homophobic or transphobic violence than we were before Saturday night's atrocity. The fear that I've heard most of my friends and community express is the fear of the violence that the US government may well cynically and hypocritically enact in the names of Latinx and Black queer and trans folks who, on any other day, would at best be ignored by most of these politicians.

From the Transgender Law Center:

In this first moment of shock and grief, we call on our community not to promote Islamophobia and unfounded assumptions. What we do know is that one need not look outside of the U.S. mainstream to find a climate of extremely violent rhetoric, systems, and laws and policies targeting LGBT people of color.

The acts of an individual are not representative of any one ethnicity, race, or faith. With Islamophobia in our country growing to greater and more dangerous levels, it is ever more important to be intentional about what narratives we choose to lift up.... For those of us who are LGBTQ and Muslim, we wait to see which of our identities we will be more fearful of disclosing in a world that questions our existence and intentions daily.

From Trikone, a nonprofit organization for LGBTQ people of South Asian descent:

From a coalition of Atlanta-based groups that includes the Georgia Trans Latina Coalition, Latino LinQ, NAESM, SisterLove and many others:

We do not live in silos. We are all deeply connected through the various intersections of race, gender, ability, sexuality, religion, and background and we call for unity against violence and solidarity in love. We must take care of each other in our pain, with a commitment not to return violence with violence either in word or deed. Instead, we must advance ideas of inclusion, affirmation and understanding. This massacre occurred in a time in our country where Islamophobia is an increasing threat. We urge people to refrain from using this tragedy to further bigotry or hatred towards the Muslim community; let it ignite in us the commitment to work against hatred and violence directed at LGBTQ people and all people.

And from Black Lives Matter:

Homegrown terror is the product of a long history of colonialism, including state and vigilante violence. It is the product of white supremacy and capitalism, which deforms the spirit and fuels interpersonal violence.... To honor our dead, and fight like hell for the living, we need a new vision for safety that prioritizes human rights and does not facilitate deadly violence. We need a world that realizes that the word "terrorist" is not synonymous with Muslim, any more than "criminal" is synonymous with Black. The enemy is now and has always been the four threats of white supremacy, patriarchy, capitalism, and militarism ... Until these systems are defeated, until anti-Blackness no longer fuels anti-Muslim and anti-queer and trans bigotry, exploitation, and exclusion -- we can never be truly free.

Once again, my community must say "not in our names" to prevent our tragedy from being co-opted for others' violent, imperialistic agendas. Last time, the community was New York; in the years after 9/11, we gathered in the streets to plead to our government and our nation that we not allow the September 11, 2001, attacks to be used as justification for the disproportionate, indiscriminate wars in Afghanistan and Iraq. People who had lost loved ones in the attacks, who had made it out of the towers covered in soot and debris, whose lives had been entirely displaced and disrupted by the attacks, who lived looking at that empty hole in the skyline day after day -- we gathered, chanted and marched countless times to plead with the rest of the far-less-impacted US population that they not use our tragedy as an excuse to wreak more injustice and death on the world.

Now it is Latinx, Black and other queer and trans people of color who are rising up and through our tragedy, trying to lift our voices above the din of "terror" and "jihad" and "ISIS" to say no more, not again, not in our names this time. Not that we are under any delusions that this nation would go to war over 100 dead and wounded queer and trans people, much less Black and Brown ones; in fact, I already see the fact that this was an attack on Latinx and Black queer and trans communities being subsumed by the theme of terror, an easier sell to our largely homophobic and transphobic US society. We will continue to lift our voices against our erasure in our own time of tragedy, and against the physical and verbal violence that many in our nation would gladly direct at us, queer and trans people of color, were their hate not being carefully directed toward Muslims instead.

Copyright, Truthout. May not be reprinted without permission.  Re-printed with permission.  Truthout publishes a variety of hard-hitting news stories and critical analysis pieces every day. To keep up-to-date, sign up for our newsletter by clicking here! http://www.truth-out.org/component/banners/click/2

Jack Aponte is a gender/queer Boricua living in Oakland, California. Follow them at @jackaponte.