During the recent 7th Congress of the Communist Party of Cuba, it was agreed that the Draft Conceptualization of the Cuban Economic and Social Model and the National Economic and Social Development Plan through 2030 would be submitted to a process of democratic consultation across Cuban society. Cuba’s Granma newspaper reported on Tuesday that the four-month long consultation process will assess aspects from two key documents approved during this year's PCC Congress. 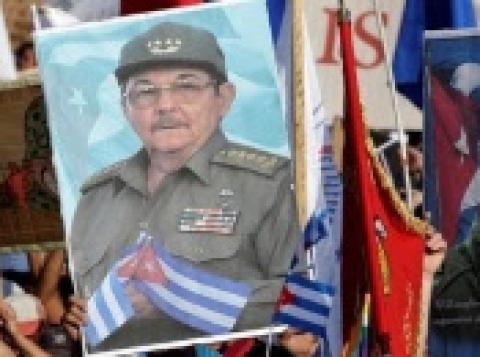 People carry pictures of Cuba's president Raul Castro and his brother and Cuba's former President Fidel Castro during a parade in Havana, Reuters

As agreements are made to be fulfilled and not to be shelved, today one of the decisions of the recent 7th Party Congress – which was outlined on the very first day in the Central Report – is already being put into practice: “In order to enrich and perfect these documents we propose that both, that is to say, the conceptualization and fundamentals of the National Development Plan, after being reviewed by the Congress, be submitted to a process of democratic discussions by members of the Party and Young Communist League, representatives of mass organizations and broad sectors of Cuban society.”

That day, the Party First Secretary, Army General Raúl Castro Ruz, also added: “Thus we request that the Congress grant the Central Committee the authority to make any necessary modifications that may result from the consultation process, including relevant adjustments to guidelines that might be approved during this event, as well as final approval of the documents.”

This is a highly significant agreement, embodying the national vision proposed by the model, whose conceptual substance is based on a sovereign, independent, socialist, democratic, prosperous and sustainable society. That is, the Party of the nation, a single party, but with a deeply democratic character, submitting both texts to the people in order to crystallize a participatory project par excellence.

It has been said, and rightly so, that these are comprehensive and highly complex documents, which need to be read and analyzed more than once, to ensure a proactive and purposeful debate. A logical route to a better understanding of the texts is to begin by thoroughly studying the Central Report to the 7th Congress, which provides the reasoning. As for the two texts subject to consultation, the Draft Conceptualization of the Cuban Economic and Social Model should be studied first, to understand the proposal as to what we want to achieve, followed by the fundamentals of the National Economic and Social Development Plan through 2030, in order to consider how to achieve the country we desire, once the economic and social model has been updated.

The Conceptualization presents the main transformations that characterize these new fundamentals, that is, what needs to change in order to advance and consolidate the unchanging principles of our socialism, and build a nation with the described attributes. It is written in the present tense, it expresses what we want to be, and also outlines the principles underlying the model: social ownership of the means of production; a planned economy and social policies.

The National Development Plan through 2030 defines the strategic concepts (effective socialist government and social integration, productive transformation and international integration, infrastructure, human potential, science, technology and innovation, natural resources and the environment, and human development, justice and equity), which form the driving forces of the plan and will enable its materialization and the attainment of the society we want. It covers all areas of society, and includes economic sectors which are equally strategic (construction; electro-energy, telecommunications, transport, storage and trade, tourism, professional services, agribusiness and the food industry, pharmaceuticals, biotechnology and biomedical products, the sugar industry and its derivatives, and light industry), whose performance will direct the rest of the economy, creating a climate of productive efficiency at a national level.

But, take note, this is not a purely economic debate, and the Central Report itself says so, “The economy continues to be the key unresolved task and political-ideological work is a permanent issue, intimately linked with the economic battle, as it ensures the conscious, active and committed participation of the majority of the population in the process of updating the economic and social model.”

What has begun to happen this June 15 will lead to Cubans defining and participating in their future. Doing so as a right, ratifying the sovereign, independent nature of the nation. This is not a new procedure. It strengthens the humanist essence of a Revolution which upon reaching 58 years since its inception, does not consider its work complete, a Revolution which seeks to improve quality of life, not only for the collective, but in terms of family and personal projects.

This is a proposal for a socialist nation, in which it is again reiterated that no one will be left to their own fate, unprotected. We return to the Central Report to read, “Decisions made with regard to the Cuban economy will never, under any circumstance, mean a break with the ideals of equality and social justice of the Revolution and much less rupture the strong union between the majority of the people and the Party. Neither will we allow such measures to generate instability or uncertainty within the Cuban population.” This principle has a clear implication: No one is unnecessary in socialism, at least in the socialism being constructed in Cuba.

Everyone counts, just as the opinions to be gathered count, on the Conceptualization and Development Plan, which are not bureaucratic texts, but documents which have been crafted and revised by academics, specialists, economists and intellectuals - eight different versions in the case of the Conceptualization.

We also know that two Central Committee plenums (December, 2015 and January, 2016) contributed 900 suggestions, which led to yet another draft, then submitted to 1,000 Congress delegates and more than 3,500 invitees, including all National Assembly deputies, who submitted more than 8,800 comments and proposals which were incorporated to produce the version presented at the 7th Congress, where the document was again modified.

A stage of vital importance has now arrived. What emerges from this great discussion will go to the Central Committee meeting next December for approval, and then the National Assembly of People's Power, and produce improved documents. When the National Assembly takes them to a vote, they will no longer be 7th Congress texts, but those which describe the country we want.

They will serve us in the decisive debate to which compañero Raúl called us during the 6th Congress: “Without the slightest chauvinist intention, I believe that Cuba is among a small number of countries in the world with the conditions in place to transform its economic model, and emerge from the crisis without social trauma, because, in the first place, we have a patriotic people, which knows it is powerful because of the strength represented by its monolithic unity, the justice of its cause, and its military preparedness, highly educated and proud of its history and revolutionary roots.”

Representatives and members of Cuban civil society groups will participate in a public consultation process in order to debate the major economic proposals agreed upon during the seventh Congress of the Communist Party of Cuba (PCC) last April.

The proposals included in the two documents aim to clarify and examine the key features of the country’s socio-economic model, according to Granma.

“These two documents are broad in scale and complexity, which outline the Cuba’s revolutionary process and our society’s future towards building a prosperous and sustainable socialism,” Granma wrote in it’s editorial piece on Tuesday.

The public evaluation process will likely examine proposed structural economic reforms such opening up the private sector, and easing migratory policy, giving individuals the right to purchase and sell their own homes and cars and loosening the tax and foreign investment law.

This consultation process seeks to “enrich and perfect” the documents agreed upon during the seventh PCC congress, Granma wrote.

“The active participation of millions of Cubans is indispensable in consolidating the future of Cuba,” the Granma editorial added.

During the seventh PCC meeting, Cuban leader Raul Castro emphasized that all proposals will need to be incorporated into the Constitution, and any reform initiative should be approved by the National Assembly, and submitted to an extensive process of popular participation, including a constitutional referendum, he noted.