Birmingham, Alabama, 74% African-American, with 47 % of its children living in poverty passed a minimun wage bill to take effect this March. Republican in the State House passed legislation to undue the measure, taking away the right of local juristiction to enact labor ordinances that impact workers. As a result, 42,000 low-wage workers in Birmingham lost wages increases. Now workers are fighting back with a state-wide Living Wage campaign. 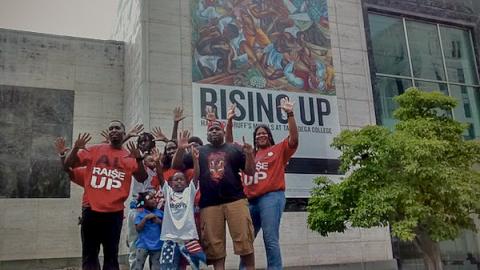 Some “Raise Up for $15” workers and family unwind after rally outside Birmingham City Hall., Joe Keffer

On June 6th, North Carolina NAACP President and Moral Monday architect, the Reverend Doctor William Barber, captivated a racially and ethnically mixed crowd, approaching 1000, at Birmingham Alabama’s New Pilgrim Baptist Church. Reverend Barber called for a revolution of values similar to those of the Civil Rights days. He admonished, “There comes a time when silence is betrayal.”

Alabama is one of the most anti-worker states in the country but the combination of a fight to increase minimum wages, a lawsuit, and the commitment to work in upcoming elections signals the kind of commitment called for by Reverend Barber and the possibility of a turnaround.

Since 2010, the Republicans have held the governorship and a super majority in both state legislative branches. Alabamians have suffered greatly. The State has the fourth lowest median household income in the country: nearly 20% of residents live below the poverty line and the state’s unemployment rate – 6.1%.

The industry publication, 24/7 Wall Street, reports that Alabama is among the five worst run states. Controversy runs rampant among elected officals as the Republican governor, Speaker of the House, and State Supreme Court Chief Justice have been involved in scandals, convicted of crimes, or removed from office. The wrongdoing could go much deeper.

But the glitz of the scandals and corruption should not divert us from the legislative majority’s callous disregard for worker’s well being.

Alabama is one of only five states that refuses to enact a minimum wage law; defaulting to the federal minimum rate of $7.25. This low wage threshold plays a big role in the State’s poverty and misery.

Alabama is also staunchly a “right to work” state and recently incorporated the law into the State Constitution. The Economic Policy Institute and others say the law’s real goal is to undermine unions, and only provides a “right to work” for less. AFL-CIO research documents that the average worker in “Right to Work” states make $5,971 less in wages, have fewer or no health benefits, and the risk of workplace death is 45% higher. “Right to Work” states have much higher poverty rates.

And Alabama politicians don’t pull any punches when it comes to unions. In the middle of a recent union organizing drive, Republican Governor Bentley claimed that the state had to keep unions out and wages low in order to create a business friendly environment. Understandably, Golden Dragon workers (HERE and HERE) in Wilcox County ignored Bentley’s advice and voted to join the Steelworker’s union.

Birmingham is 74% African-American and 47% of its children live in poverty. In August, 2015, seven of nine Birmingham City Council members and the Mayor supported a local ordinance that made Birmingham the first city in the Deep South to adopt a $10.10 minimum wage increase. Pegged to the consumer price index, it included raises for tip workers and strong enforcement language. It was to become effective in March 2016. It gave other big Alabama cities the resolve to move forward with similar ordinances.

When the legislature reconvened in 2016, it took Alabama Republican lawmakers a little over a week to squash Birmingham’s local efforts. The hasty legislative action allowed for virtually no public notice or input. The law passed prevents local jurisdictions from enacting any labor ordinances that impact workers. Within two hours, the governor signed the law into effect.

As a result, 42,000 Birmingham low-wage workers lost hourly increases of up to $2.85. In total, several hundred thousand workers statewide lost out.

The Greater Birmingham Ministries (GBM) led the coordination for Reverend Barber’s event. The NAACP, GBM and individual plaintiffs have sued. They allege that the state, in its haste, failed to adhere to mandatory procedural protections, equal rights and other violations.

Lawsuits can pay big dividends but litigation is traditionally slow and tends to substitute the judiciary for community involvement and on-the-ground organizing. To avoid this trap, workers have launched an aggressive campaign to gain not only a higher minimum wage but also fight for: voting rights, Medicaid expansion, immigrant and LGBT rights, prison and pay-day lending reform.

A public outcry followed the state’s intrusion into local control. With an effective media strategy, the story picked up coverage locally, nationally and even internationally.

Education leads to activism. From the beginning, “Raise Up For $15 Alabama” put a human face on their campaign as it pressed for $15 and a union. The National Employment Law Project provided invaluable legal and research assistance. Rallies have been held and more are planned.

As we head into a general election year, Jim Price, Co-Chair of “Move to Amend Tuscaloosa”, a group dedicated to election and campaign finance reform, says that communities need to get involved in electoral politics. “More so than ever before, the well-being of our communities, state and country depend on it.” says Price.

For questions, comments or to get involved, call: Alabama Coalition for Economic Justice at 334-587-0507