Abortion Clinics in Texas Cannot be Shut Down: Supreme Court

The country's most repressive law against abortion was struck down in the Supreme Court, to the fanfare of reproductive rights advocates. 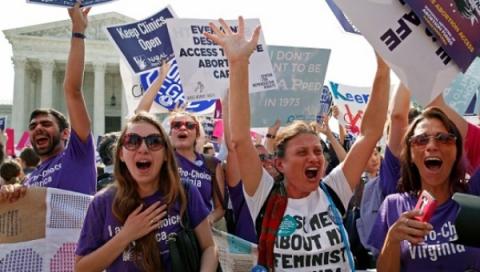 Demonstrators celebrate at the Supreme Court after the court struck down a Texas law imposing strict regulations on abortion doctors and facilities., Reuters

The U.S. Supreme Court on Monday handed a victory to abortion rights advocates, striking down a Texas law imposing strict regulations on abortion doctors and facilities that its critics contended were specifically designed to shut down clinics.

The 5-3 ruling held that the Republican-backed 2013 law placed an undue burden on women exercising their constitutional right to end a pregnancy established in the landmark 1973 Roe v. Wade decision. The normally nine-justice court was one member short after the Feb. 13 death of conservative Justice Antonin Scalia, who consistently opposed abortion in past rulings.

Conservative Justice Anthony Kennedy joined liberal members of the court in ruling that both key provisions of the law violate a woman's constitutional right to obtain an abortion.

Liberal Justice Stephen Breyer, writing for the court, said that the appeals court that upheld the law was wrong in its approach, noting that courts are required to "consider the burdens a law imposes on abortion access together with the benefits that those laws confer."

Deferring to state legislatures over "questions of medical uncertainty is also inconsistent with this court's case law," Breyer added.

By setting a nationwide legal precedent that the two provisions in the Texas law were unconstitutional, the ruling imperils laws already in place in other states.

Texas had said its law, passed by a Republican-led legislature and signed by a Republican governor in 2013, was aimed at protecting women's health. The abortion providers had said the regulations were medically unnecessary and intended to shut down clinics. Since the law was passed, the number of abortion clinics in Texas, the second-most-populous U.S. state with about 27 million people, has dropped from 41 to 19.

The Texas law required abortion doctors to have "admitting privileges," a type of formal affiliation that can be hard to obtain, at a hospital within 30 miles of the clinic so they can treat patients needing surgery or other critical care.