“It’s a step on the path towards justice for our clients and for Victor but also for the many other families who lost someone at Chile Stadium so many years ago,” she said after the verdict. “We presented evidence that started to shed light on what happened there, and we hope that process will continue in Chile and we hope that the United States will extradite Mr Barrientos to face justice in the country where he committed these crimes.” 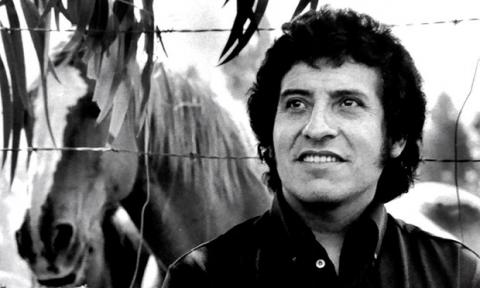 Victor Jara was killed in 1973 in the opening days of the dictatorship of Gen Augusto Pinochet., Fundacion Victor Jara, Antonio L/AP

A Florida jury on Monday found a former Chilean army officer liable for the 1973 torture and murder of the folk singer and political activist Victor Jara, awarding $28m in damages to his widow and daughters in one of the biggest and most significant legal human rights victories against a foreign war criminal in a US courtroom.

The verdict against Pedro Pablo Barrientos Nuñez after a two-week civil trial in Orlando’s federal court could now also pave the way for his extradition to face criminal murder charges in Chile related to his conduct during a CIA-backed coup that led to Augusto Pinochet’s 17-year military dictatorship and the deaths of almost 3,100 people.

Accusers said Barrientos, 67, who now lives in Deltona, Florida, shot dead Jara, 40, in September 1973 after three days of beatings while the socialist-leaning theatre director and university lecturer was among thousands of suspected communists and subversives detained in Santiago’s soccer stadium.

Barrientos, who fled Chile in 1989 and became a US citizen through marriage, was one of nine retired army officers indicted for murder in his homeland four years ago but the US Department of Justice has not responded to a request by the Chilean government for his return.

Kathy Roberts, legal director of the Center for Justice and Accountability, the California-based human rights group that brought the civil action on behalf of Jara’s British-born widow, Joan Turner Jara, and daughters Amanda Turner Jara and Manuela Bunster, believes the Florida jury’s ruling could now increase the pressure on the DoJ.

“It’s a step on the path towards justice for our clients and for Victor but also for the many other families who lost someone at Chile Stadium so many years ago,” she said after the verdict.

“We presented evidence that started to shed light on what happened there, and we hope that process will continue in Chile and we hope that the United States will extradite Mr Barrientos to face justice in the country where he committed these crimes.”

Joan Jara Turner, 88, testified during the trial that her husband’s death in a stadium locker room had “cut my life in two”, and has previously spoken of the horror of having to identify his tortured and mutilated body in a morgue after he was dumped outside the stadium with 44 bullet wounds.

“[I’m] happy in a sense that what we were trying to do for more than 40 years, for Victor, has today come true,” she said through tears on the steps if the Orlando courthouse.

“It’s the beginning of justice for all those people, those relatives in Chile who are waiting to learn the fate of their loved ones, who have been for years and years, just like us, seeking justice [and] knowledge.

“It’s been a long journey. For Victor, art and social justice were one and the same. His songs continue to be sung today and inspire both artists and those who seek social justice.”

Daughter Amanda Turner Jara, who thanked lawyers from the CJA and pro bono counsel from New York legal firm Chadbourne & Parke, said it was crucial that Barrientos was extradited.

“He ran away. He’s been hiding here for so long, and it’s time he faces that now in Chile,” she said.

The jury of five women and one man deliberated for nine hours before determining that Barrientos, a Pinochet loyalist who commanded the Chilean army’s notorious Tejas Verde brigade, should pay $6m in compensatory damages and a further $22m in punitive damages. The jury found him liable on both counts of the civil indictment, for torture and extrajudicial killing.

The Jara family, however, are unlikely to see any payment. Barrientos’ lawyer Luis Calderon painted a picture during the trial of a poor retiree who lives in a modest two-bedroom house and drives around in a decade-old car, and who was forced to work as a cook at a fast-food restaurant for years just to make ends meet.

Barrientos, who remained impassive as the verdicts were read, did not comment afterwards but Calderon said he was disappointed. “We will explore all our options regarding an appeal,” he said.

Dixon Osburn, executive director of the CJA, told the Guardian that one of the biggest challenges was proving that Barrientos, who also worked for a time as a landscaper during almost three decades in the US, was the same violent army officer who beat, tortured and shot Jara.

“These cases are always difficult because a lot of time has passed and because of the silence that has encased this matter for so long,” he said. “Trying to break through that silence and lift the veil on what happened in those days was enormously difficult.

“One of the things the Jara family has been pursuing for 43 years is just the truth. Barrientos said in deposition he knew nothing of Chile Stadium, he knew nothing of Victor Jara, but we had conscript after conscript saying he was there and he was responsible for what took place.”

One of the conscripts, Jose Navarette Barra, said during the trial in video testimony from Chile that Barrientos boasted of what he had done. “He said many times that he killed Victor Jara,” Barra said. “He talked about killing a communist, and he didn’t want a communist in Chile.”

The ruling marks the latest victory in the CJA’s pursuit of overseas war criminals and human rights abusers living in Florida. In August 2015, El Salvador’s former defence minister Carlos Eugenio Vides Casanova was extradited to El Salvador after a lengthy legal battle. Vides, an army general in the country during the bloody civil war in the 1980s, was accused of covering up a number of atrocities, including the rape and murder of four American churchwomen.