﻿ The Other ‘Political Revolution’ Growing in Washington

﻿ As #BlackLivesMatter co-founder Alicia Garza said explicitly at the Roosevelt event in conversation with ﻿Melissa Harris-Perry and Nobel Prize–winning economist Joe Stiglitz, “any policy that we develop needs to have an intersectional lens.” 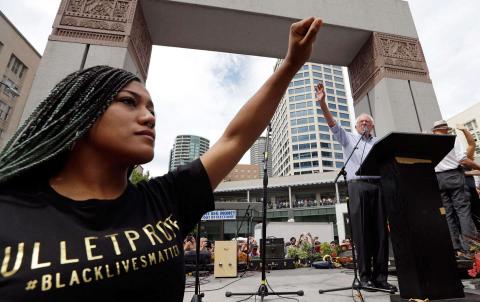 ﻿ Of all the big stories of this campaign season, perhaps the most severely under-reported is a series of conversations happening just below the establishment surface among progressives in the Beltway. Increasingly, the mainstream consensus is that you cannot address pocketbook issues without also addressing the many realities of race, gender, and sexuality that shape those concerns.

In just one week in June, Planned Parenthood Federation of America, celebrating its 100-year anniversary, began openly wrestling with the painful legacy of race and racism in the fight for women’s rights and reproductive equity. The Center for American Progress hosted a discussion about the political attitudes and preferences of women of color, specifically black and Latino women, who are particularly important this election cycle. And the Roosevelt Institute hosted a discussion on race and corporate power as part of releasing two reports on the subjects. (Full disclosure: I’m a Fellow at the Roosevelt Institute and co-wrote one of the reports on the racial rules of the economy.)

The common thread through all of these events, besides Melissa Harris-Perry keynoting or moderating all three discussions, was the underlying assertion that progressives must utilize an “intersectional” framework in both policy analysis and political strategy. Indeed, as #BlackLivesMatter co-founder Alicia Garza said explicitly at the Roosevelt event in conversation with MHP and Nobel Prize–winning economist Joe Stiglitz, “any policy that we develop needs to have an intersectional lens.”

Intersectionality—a theory, analytic framework, and political project advanced primarily by black feminists in the academy for over three decades—has burst out of the insular academic bubble and found life in the belly of the national political beast. And with a presumptive Republican nominee who has gained power by not just by dog whistling but barking racist cues to resentful white voters, it’s not a moment too soon.

As the “political revolution” and the contest between Bernie Sanders and Hillary Clinton comes to a close, in many ways this moment in American politics represents the final nail in the coffin for the color-blind, race-neutral political strategy of the centrist Democratic Leadership Council—started in the 1980s to move the Democratic Party away from pursuing racial justice while advancing a neoliberal economic agenda. It is worth remembering that Bill Clinton was a central figure in the DNC’s founding and the implementation of its strategy. Now an exactly opposite consensus is forming, one that Hillary Clinton, ironically, will be forced to engage—including, possibly, a repentance for the sins of the first Clinton administration. Political karma is a funny thing. Indeed, as Roosevelt Institute President and CEO Felicia Wong said in her framing remarks for the event: “Trickle down and color blindness started together. The two are linked and they reinforce each other. We must tackle them together.” Amen.

Racial and economic inequality do not exist by accident. They are the accumulation of choices we have made in the past that affect us in the present. We can therefore make other kinds of choices to move in a different direction, toward economic, racial, and gender justice. “The reality is that inequality is racialized and gendered,” said Garza in her dialogue with Stiglitz. Emphasizing legacy effects, Stiglitz argued that “we can’t pretend history doesn’t matter” when looking at contemporary racial and economic inequalities. “The narrative that markets eliminate all discrimination is a fiction. It’s a convenient theory for policymakers.”

One familiar point of tension: If inequality is indeed a choice we make collectively, why do we keep making that choice? Stiglitz argued that many working-class and middle-class whites misunderstand their self-interest, presumably their economic self-interest, which leads them to support candidates and policies that drive inequality of all sorts. “It’s not a misunderstanding of self-interest,” Harris-Perry responded. “White racial privilege is sticky and valuable. It’s one of the best gigs in town.”

Garza, Harris-Perry, and Stiglitz, each from distinct yet overlapping worlds in the progressive ecosystem, did agree on one thing: the role of movements and organizing. In order for the big idea of intersectionality to take hold as a guiding principle of progressive policy-making, our movements will have to keep demanding it be so.

Copyright c 2016 The Nation. Reprinted with permission. May not be reprinted without permission. Distributed by Agence Global.
Please support our journalism. Get a digital subscription to The Nation for just $9.50!