The post-coup chaos in Turkey, home to NATO’s largest nuclear weapons storage facility, is an alarming reminder about the risk of siting nuclear weapons in unstable regions where they serve no clear strategic purpose, but pose a clear and present danger. At issue is not only the obvious risks of nukes falling into unfriendly hands, but also, after the fall of the USSR, who are these hydrogen bombs, a quarter of NATO’s theater nuclear weapons, to be used against? 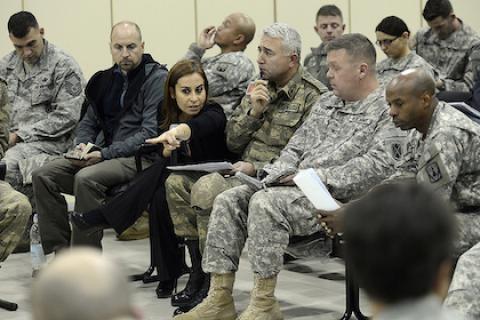 A U.S. and Turkish military briefing at Turkey’s Incirlik Air Base. Incirlik, whose commander was arrested for complicity in the recent coup attempt, is home to 50 hydrogen bombs., U.S. Army/Tech. Sgt. Charles Larkin Sr.

The national security priesthood in Washington has always used claims of superior wisdom and insider knowledge to silence dissent about nuclear policy. But not even they can explain any longer why U.S. nuclear bombs are being stored in politically unstable Turkey as it grows increasingly Islamist and anti-American.

The Incirlik air base in southeast Turkey — from which U.S. pilots launch bombing raids on ISIS forces in Syria — is home to about 50 B-61 hydrogen bombs. That makes it NATO’s largest nuclear storage facility, with about a quarter of all theater nuclear weapons in the alliance’s stockpiles.

Each bomb has a yield of up to 170 kilotons, nearly a dozen times more powerful than the weapon that leveled Hiroshima. The bombs are stored in underground vaults within aircraft shelters that in turn are protected by a base security perimeter.

But Eric Schlosser, author of a 2014 book on the perils of nuclear accidents, observed recently, “With a few hours and the right tools and training, you could open one of NATO’s nuclear-weapons storage vaults, remove a weapon, and bypass the [protective switches] inside it. Within seconds, you could place an explosive device on top of a storage vault, destroy the weapon, and release a lethal radioactive cloud.”

In addition, the security of the bombs is premised on them being defended by loyal NATO forces. In the case of Incirlik, that loyalty proved uncertain at best. Power to the base was cut after mutinous troops used a tanker plane from the base to refuel F-16s that menaced Ankara and Istanbul.

After the coup, the Turkish commander of Incirlik was arrested for complicity and marched off in handcuffs. One can easily imagine a clique of Islamist officers in a future coup seizing the nukes as a bargaining chip with Ankara and Washington — or, worse yet, to support radical insurgents in the region.

After years of inattention to NATO’s nuclear deployment policy, the recent failed coup in Turkey is finally setting off alarm bells. Jeffrey Lewis, a nuclear proliferation expert at the Middlebury Institute of International Studies at Monterey, asked rhetorically, “Does it seem like a good idea to station American nuclear weapons at an air base commanded by someone who may have just helped bomb his own country’s parliament?”

Hans Kristensen, a nuclear expert with the Federation of American Scientists, declared that “the security situation in Turkey and in the base area no longer meet the safety requirements that the United States should have for storage of nuclear weapons. You only get so many warnings before something goes terribly wrong. It’s time to withdraw the weapons.”

Most tellingly, former NATO Supreme Allied Commander James Stavridis wrote — being careful not to publicly confirm any classified information — that if NATO really does house tactical nuclear weapons at Incirlik Air Base, “this poses a very dangerous problem, and Washington will need Ankara’s full cooperation to ensure that all U.S. military equipment and forces are fully protected.”

The questioning should go beyond the obvious security risks of loose nukes falling into unfriendly hands, however. No one has ever explained what enemy the hydrogen bombs stored in Turkey might be used against, a quarter century after the fall of the Soviet Union. No doubt there are plenty of neocons in Washington who would delight in dropping them on Iran, as advocated by Republican billionaire Sheldon Adelson, but one hopes that most Americans do not share his fondness for gambling outside of casinos.

Nor has anyone explained how the bombs might be used if an appropriate enemy were found, since NATO has no nuclear-certified aircraft stationed in Turkey. But in Washington and in Brussels, the inability to answer such basic questions is rarely cause to rethink old policies. After all, how many priests give up their incantations just because the chants don’t work?

Although Turkey offers an egregious case of nuclear risks, questions about nuclear weapons deployment should go well beyond that country. Security is also notoriously lax at NATO bases in Belgium and the Netherlands where nuclear weapons are stored.

As Schlosser recalls, “In 2010, peace activists climbed over a fence at the Kleine Brogel Airbase, in Belgium, cut through a second fence, entered a hardened shelter containing nuclear-weapon vaults, placed anti-nuclear stickers on the walls, wandered the base for an hour, and posted a video of the intrusion on YouTube. The video showed that the Belgian soldier who finally confronted them was carrying an unloaded rifle.”

As I have argued before, the threat of terrorism is only one of several reasons to rethink the presence of theater nuclear weapons on NATO soil. Those weapons actually decrease the security of Western Europe by raising the risks of catastrophic escalation in the case of an inadvertent conflict with Russia. The weapons are also utterly unnecessary for deterrence, given the nuclear arsenals available to the United States, Great Britain and France.

Despite these risks, influential voices in the alliance are calling for more brandishing of nuclear weapons, not less. A recent article in NATO Review declared, “The forces involved in the nuclear mission should be exercised openly and regularly, without undermining their specific nature. Such exercises should involve not only nuclear-weapon states, but other non-nuclear allies.”

And the Obama administration, for now at least, remains bent on upgrading its hydrogen bombs and building a new class of nuclear-tipped cruise missiles, both of which would be deployed in Europe.

Yet the observation of German Foreign Minister Frank-Walter Steinmeier remains as true today as when he said it in 2009: “From the military point of view, those (theater) weapons are absolutely senseless today.”

The question he asked then is the one that all thinking people should be asking in the wake of Turkey’s recent debacle: “Isn’t it time to include substrategic and tactical nuclear weapons in the nuclear disarmament process, in order to [eliminate] once and for all the leftovers of the Cold War on the territory of Russia and Europe?”

[Jonathan Marshall is frequent contributor to ConsortiumNews and the author or co-author of five books on international affairs, including The Lebanese Connection: Corruption, Civil War and the International Drug Traffic (Stanford University Press, 2012).]