Sanders’ Campaign in the Balance

How – and how far – the “political revolution” will continue remains to be seen. What has already occurred is a surge of support for the Green party. Many of Sanders’ delegates will be pressing the campaign’s radical demands within the Convention. This activity will draw its participants beyond what they could hope to achieve within the constraints of Sanders’ candidacy. Yet it was the vast reach of that candidacy which made possible these steps to go beyond it. 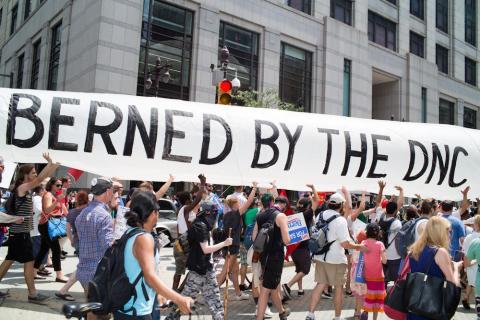 Now that Bernie Sanders has endorsed Hillary Clinton as the Democrats’ presidential nominee, we have an opportunity to assess what his own campaign has accomplished.

As was already clear last August, the only way his campaign would be able to gain wide visibility was if he conducted it under the umbrella of the Democratic Party (DP). Yet the precondition for his doing this was for him to agree, in the event that he did not win, to throw his support to the winner.

The whole project thus had a measure of ambivalence from the outset. In return for gaining access to the corporate media, and thereby to audiences in the tens of millions, Sanders was committed to circumscribing his radical message in certain ways. The broad limitations – pertaining most immediately to the sphere of foreign policy – were clear from the start.

At this level, the campaign did not bring any surprises. Sanders’ failure, during the campaign debates, to criticize Clinton’s initiatives against Honduras and Libya, and her support for regime-change in Syria and Ukraine (let alone the overall imperialist oxymoron of the “war on terror”), was regrettable but predictable.

What did constitute a surprise was the enormous level of enthusiasm that Sanders generated, especially among young people, with his relentless denunciations of economic inequality and the “billionaire class.” Drawing crowds in the tens of thousands, receiving millions of small donations, and finding a vast reservoir of support in sectors not reached by Left organizations was indeed an achievement – and one whose impact need not disappear just because Sanders himself has abandoned his challenge.

Sanders’ readiness to eventually support Clinton was signalled not only by his abstention from any sharp critique of her foreign policy, but also, under the guise of not conducting a “negative” campaign, by his failure to press the demand that she make public the text of her speeches to the Goldman-Sachs investment-banking company. Notably, he also never raised the issue of contributions made to the Clinton Foundation by the Saudi government while, as Secretary of State, she was administering arms-sales to that same regime, in violation of US law against selling weapons to regimes that violate human rights. Nor was he willing to challenge her use of a private email server for carrying out some of her official functions.

Finally, in the closing weeks of the primaries, he signalled his disposition to yield graciously to Clinton – and not take his challenge to the Convention – even though: (1) the number of her “pledged” delegates (as distinct from “super-delegates” whose votes are not officially counted until they cast them at the Convention) was still short of a majority; (2) millions of votes in the huge California primary were still uncounted, with evidence that their inclusion could have swung the outcome to Sanders (see the 40-minute video “Uncounted: The True Story of the California Primary”); (3) there were other instances of voter-suppression, including the removal of 125,000 registered Democrats from the lists in Brooklyn, New York, and the drastic shrinkage of polling facilities in poor districts in Phoenix, Arizona; (4) the DP leadership had unfairly limited his exposure by scheduling few campaign debates, at unfavourable times; and (5) all the surveys pitting the two DP contenders against Donald Trump showed that Sanders was preferred over Trump by a bigger margin than was Clinton.

Sanders defended his gracious withdrawal by arguing that his negotiations with Clinton made possible the inclusion of progressive commitments in the DP’s platform. Platform-statements carry little practical weight, however, and, in the event, although Sanders was able to name 5 members of the 15-member platform-drafting committee, most of their demands (including for progressive environmental measures, for opposing the Trans Pacific Partnership, and for denouncing the Israeli Occupation) were rejected.

Of course, the intent of the DP leadership all along was that Sanders would “deliver” his supporters to their preordained candidate, Hillary Clinton. But the bargain that Sanders made with the DP was not made by his supporters. Even with the imposed limitations to the policy-changes that he could advocate, some of his rhetoric undercut the “sheepdog” role attributed to him by his radical detractors.

To his credit, Sanders stressed from the outset that the campaign was about more than just getting a particular person into the presidency; it was about a “political revolution.” This was a slogan that he retained throughout the campaign. Together with his denunciations of Wall Street and his calls for free healthcare and free higher education, the call for political revolution cannot easily be folded into an enthusiastic backing for Clinton. As Jill Stein of the Green Party is now saying, you can’t carry out a political revolution from within a counterrevolutionary party (see her speech following Sanders’ capitulation)

Sanders was pressed from the left throughout his campaign. The Socialist Alternative organization launched a petition (with over 100,000 signatures) urging him to run as an Independent. Given the legal obstacles to gaining ballot status late in the electoral process, however, any such drive would have required Sanders to join a party that already has the necessary machinery in place. After Clinton claimed victory in the midst of the California vote-count, Jill Stein reached out to Sanders, inviting him to discuss with her the possibility of his seeking the presidential nomination of the Green Party (whose Convention will be held in August, after those of the Republicans and the Democrats). Sanders did not respond.

How – and how far – the “political revolution” will continue remains to be seen. What has already occurred is an immediate surge of support for the Green party, including an endorsement by one of Sanders’ former leading supporters, the African American intellectual Cornel West. Left groups are planning an array of socialist activities, including a “socialist convergence,” in Philadelphia in conjunction with the Democratic Convention (July 23-28). At the same time, many of Sanders’ over 1,900 elected delegates will be pressing the campaign’s radical demands within the Convention.

All this activity will draw its participants beyond what they could hope to achieve within the constraints of Sanders’ DP candidacy. And yet one has to acknowledge that it was the vast reach of that candidacy which made possible these steps to go beyond it.

The DP leadership, as is typical, has cast the main challenge of the election as being to defeat Donald Trump. Sanders has now embraced this call, but many of his former partisans recognize that the real challenge is to change the terms of the debate. This is what must be done both immediately and over the long term.

While it may become necessary to think defensively at the actual moment of voting (a matter that citizens will have to decide based on foreseeable outcomes within their own respective States), such legitimate concerns about the most likely immediate options are no more than a parenthesis within the larger process of building a political force that can transform the society.

Victor Wallis edits Socialism and Democracy. This article was completed on July 14, 2016.