In addition, Trump said he would lower corporate tax rates from 40% to 15% - a rate he said punished "companies for making products in America". 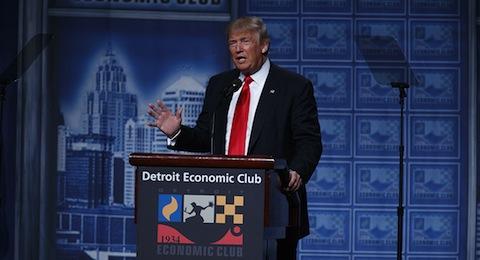 In an attempt to reset a campaign recently flogged by a series of controversies, Donald Trump outlined an economic vision for the US, including dramatically slashing taxes, and took sharp aim at Hillary Clinton.

In a nearly hour-long speech, unusually reading from a teleprompter, the Republican presidential nominee suggested Detroit itself was an example of "the living, breathing example of my opponent's failed economic agenda".

"The unemployment rate [in Detroit] is more than twice the national average," Trump said. "Half of all Detroit residents do not work. Detroit tops the list of the most dangerous cities in terms of violent crime. These are the silenced victims whose stories are never told by Hillary Clinton."

Trump said his economic plan would reverse a lagging recovery in jobs from the 2008 recession, in part by reducing income tax brackets from seven levels to three - of 12%, 25%, and 33% - and entirely eliminating income taxes for individuals who earn less than $25,000 annually, or $50,000 for a married couple. That's a change from September 2015, when he initially proposed four brackets that would pay zero, 10%, 20% and 25%. He said it would mark the "biggest tax revolution since the Reagan tax reform".

"We will make America grow again," Trump said to applause.

In addition, Trump said he would lower corporate tax rates from 40% to 15% - a rate he said punished "companies for making products in America".

"This, ladies and gentleman, is backwards - it's backwards," he said. "All of our policies should be geared towards keeping jobs and wealth inside the United States.

"No American company will pay more than 15% of their business income in taxes," he continued. Clinton's economic vision entailed "onerous regulations", which would put small companies "totally out of business, and you won't be able to start - you could never, ever start - a small business under the tremendous regulatory burden that you have today in our country."

Trump also said he would eliminate the estate tax, which currently applies to estates larger than $5.45m for individuals, or $10.9m for married couples.

"No family will have to pay the death tax," he said.

Trump's speech began with a few hiccups. Throughout his remarks, several protesters interrupted the candidate before being whisked away by security. The economic club's attendees booed, jeered and cheered, and at one point delivered a standing ovation for Trump following the interruptions. "Go home!" one attendee shouted; "We love you, Donald," said another.

The remarks were delivered inside a ballroom of Cobo Hall in downtown Detroit, before 1,500 members and guests of the prestigious Detroit Economic Club, a business and professional organization that routinely serves as a stop for presidential candidates. About 100 anti-Trump protesters marched around Washington Boulevard outside the hall while chanting "Dump Trump".

The specifications of the economic plan appeared to mimic proposals offered last fall by his campaign and later highlighted on his campaign's website. In March, the group Citizens for Tax Justice said his plan would cost more than $12tn. Trump also reiterated his opposition to the Trans-Pacific Partnership and his plan to ask TransCanada to renew the permit for the Keystone pipeline.

The newest proposals included a temporary moratorium on regulations from federal agencies. He pitched a plan to allow families to "fully deduct" all childcare expenses from their taxes, which he said would "reduce cost in childcare, offering much needed relief to American families".

The speech was viewed as a chance to reboot Trump's flailing campaign, following a week that saw the candidate vehemently push back against criticism from the family of a Muslim soldier who died in Iraq, and as the leader of the American Nazi party proclaimed him presidency as a "real opportunity". His standing in polls across the US fell in tandem, including in Michigan, where Clinton opened up a near double-digit lead this week. And on Monday, a little-known CIA operative and Republican, Evan McMullin, announced his third-party run for president, presenting himself as a conservative choice for "millions of disaffected Americans".

Trump's running mate, Indiana governor Mike Pence, made a surprise appearance to introduce Trump on Monday, saying the candidate was in Detroit to deliver what "so many American leaders have done at this very podium".

"You will hear your keynote speaker outline a vision, a new economic vision to make America great again," Pence said to applause.

Both Clinton and Trump view Michigan as vital to their campaign, and the Democratic nominee is set to follow her opponent with an economic speech, also in Detroit, on Thursday.

Clinton, on a two-day campaign swing through the battleground state of Florida, spurned Trump's economic agenda as a repackaging of Republicans' old policies. "Trickle-down economics does not help our economy grow," Clinton said during a rally in St Petersburg, Florida, on Monday. "It does not help the vast majority of Americans, but it does really well for people already at the top."

She said his tax plans will "give super big tax breaks to large corporations and the really wealthy", while casting herself as a champion for small businesses. "We're going to make the wealthy pay their fair share," she said, drawing cheers from the crowd. "I am not going to raise taxes on the middle class, but with your help we are going to raise it on the wealthy." She also took a swing at Trump's new team of economic advisers, dismissing them as "hedge fund guys, billionaire guys, six guys named Steve, apparently".

Before Trump's speech, the congresswoman Debbie Dingell said she was looking forward to the speech, "because it's really important to hear all the candidates. I've always done that."

"That's what democracy is - it's hearing from those candidates," said Dingell, a board member of the economic club and Democrat who represents Michigan in the US House. "It's understanding those candidates. So I want to see what he has to say."

"Really?" said Valerie Kindle, a retired worker for the state of Michigan who lives in the city of Eastpointe, about 20 minutes north-east of Detroit. "This person has been unstable since the very beginning. I've never seen ... a campaign ran as he ran his. We're Americans - we don't tear each other down like that."

"Now why, why should we support [him]?" Kindle continued. "Has the United States come to that level? Where we really want the scum of the earth to represent us?"