Black women have experienced the stagnation of wages along with the vast majority of other Americans. But in addition, they also experience lower pay due to gender and race bias. 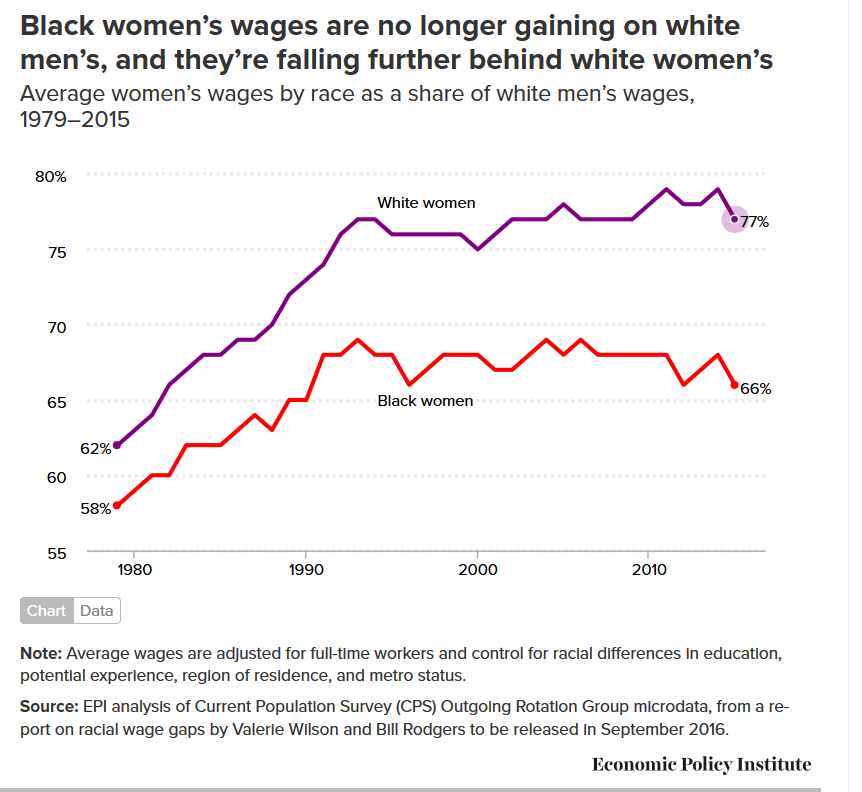 Note: Average wages are adjusted for full-time workers and control for racial differences in education, potential experience, region of residence, and metro status.

Source: EPI analysis of Current Population Survey (CPS) Outgoing Rotation Group microdata, from a report on racial wage gaps by Valerie Wilson and Bill Rodgers to be released in September 2016.

This figure shows adjusted average hourly wage gaps of white women and black women relative to white men. The graph shows that over the last 35 years, we have lost ground in closing racial and ethnic wage gaps while gender wage gaps have unquestionably narrowed. But this has largely been the result of falling men’s wages rather than improvements in women’s wages. In 1979, for instance, white women’s wages were 62 percent of white men’s wages, compared to a 58 percent for black women relative to white men—a racial difference of only 4 percentage points. Despite the large gender disadvantage both groups of women faced, black women were near parity with white women in 1979.

However, as the gender wage gap narrowed during the 1980s and early 1990s, the racial pay gap between white and black women grew. By 2015, white women’s wages had grown to 77 percent of white men’s, compared to 66 percent for black women relative to white men—a racial difference of 11 percentage points. The trend is going the wrong way—progress is slowing for black women.

The date behind this figure is from an upcoming report by Valerie Wilson and William Rodgers, which will be released in September.

Valerie Wilson is EPI Director, Program on Race, Ethnicity, and the Economy.