labor Being a Mexican Migrant Worker and Female: A Recipe for Double Discrimination 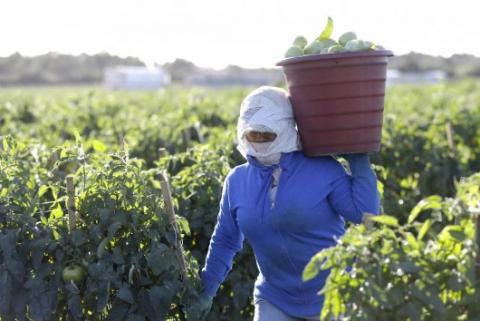 “I want to go back but they won’t let me. When I called the employer, they told me the quota had already been filled,” forty-five year old Leonor Rodríguez, from Ixtacuixtla (in the state of Tlaxcala, some 11 kilometres south of Mexico City), tells Equal Times. This Mexican woman is not able to work in Canada. Each time she submits an application for the Seasonal Agricultural Worker Program (SAWP), established by Canada and Mexico in 1974, she is denied a place.
On 2 February, Rodríguez went to the National Employment Service of Tlaxcala to request a place on the SAWP. An employee informed her that she couldn’t work in Canada, because “there were no requests for women” and that, if she wanted, he would put her “on reserve in case any places for women came up”.

A single mother with five children, she had worked under the SAWP between 2005 and 2011 in greenhouse floriculture and strawberry growing in the Canadian provinces of Ontario, Alberta and British Colombia.

Rodríguez has not only been faced with quotas that exclude her, but also less favourable pay and working conditions than men. “We were kept under tight control. We were not free to come and go as we pleased. We didn’t join the union out of fear,” she recounts.

The story is the same for women who receive H2A and H2B visas, who suffer gender discrimination and other abuses at the hands of their recruiters and employers.

The United States introduced H2 visas for foreign workers in 1943. In the 1980s, it established the H2A category for agricultural workers and H2B category for jobs such as gardening, construction and cleaning. The H2A programme includes benefits such as the right to accommodation and legal services.

The number of Canadian farms only recruiting men in 2015 was 1,744, out of a total of 1,800, confirming the argument that the exclusion of women is a “systematic and widespread practice” under the SAWP, as denounced by workers’ rights defenders.

Adareli Ponce from the municipality of Chapulhuacán – in the central state of Hidalgo, bordering Mexico City – is very familiar with the problem, having worked in the chocolate and crawfish industries in Louisiana (United States), between 2003-2006 and 2011-2013.

“As a rule, they only hire men. They tell us the work is very demanding or that women can’t handle the work. There are abuses, low wages. There were 16 of us living in a trailer, without the right to receive visits. You can’t change jobs,” she tells Equal Times.

Whilst working at the chocolate factory, thirty-four-year old Ponce wanted to learn to drive a machine to move large boxes, but her superior told her such tasks were “only for men”.

After Ponce and several of her colleagues complained about the working conditions to the management, the employer refused to hire her again in 2014.

It is in light of all this that Rodríguez, Ponce, other women workers and various non-governmental organisations filed two labour complaints, on 15 July, with the Mexican Ministry of Labour and Social Security, in relation to the North American Agreement on Labour Cooperation (NAALC), calling for investigations into the practices discriminating against migrant workers in Canada and United States.

The NAALC, along with the environmental agreement, is a side treaty to the North American Free Trade Agreement (NAFTA) signed by Canada, United States and Mexico in 1994. The agreement contains a procedure for resolving complaints regarding labour rights violations, which can either lead to a ministerial agreement, an expert report with recommendations, or an arbitration panel obliging the country to take corrective measures.

The 112-page complaint against Canada, drawn up by six female migrant workers and the UFCW argues that the recruitment and hiring practices are in breach of the NAALC and Canada’s national labour legislation, which guarantee labour standards for employees from the trading bloc.

The document points out that Canada “has failed in its obligation to ensure compliance with its own labour laws” under the NAALC, with regard to gender discrimination in the hiring of employees, and that “the Canadian government has taken no action to end such practices”.

Added to the complaint submitted by Ponce against the United States is that of another female migrant worker and the Centro de los Derechos del Migrante, Inc. (CDM – Migrant Rights Centre), accusing the country of discrimination in hiring and the allocation of work, the general exclusion of women from the temporary work programmes and the failure to ensure compliance with laws against discrimination in employment.

Mexico cannot wash its hands of the problem

The petitioners “suffered discrimination due to the ineffectiveness exhibited by the United States on failing to effectively apply its domestic labour legislation” in respect of the NAALC, points out the 31-page document.

In both cases, Mexico is being called on to investigate the complaints and to consult with its counterparts in the bloc, to ensure that the United States and Canada respect their labour laws regarding temporary workers’ rights.

“Although the legislation does not permit discrimination, they are allowing the hiring of men only. Canada must comply with its federal and provincial laws” and those under NAFTA, insisted Andrea Gálvez, a UFCW representative in Mexico, in an interview with Equal Times.

For Rachel Micah Jones, executive director of the CDM, women face “triple discrimination” as they are widely “excluded from H2 visas; and when they do take part in the programme they are channelled towards H2B visas, which offer less protection and benefits, and in many places they are segregated and receive poorer pay and terms of employment,” she tells Equal Times.

“We are all equal, but they see us as being well beneath men. We want Canada to change these policies,” said Rodríguez.

In 2014, Gálvez already filed a complaint with the independent government body for the prevention of discrimination, the Consejo Nacional para Prevenir la Discrimination, regarding abusive practices in the SAWP. In March of this year, the Mexican government committed to eradicate this conduct by 2021.

Historically, a complaint filed within the framework of the NAALC has never reached an arbitration panel. Of the 39 submissions received, nine were declined, 14 led to ministerial agreements, nine gave rise to expert reports, four were withdrawn by the submitter and three are currently being processed.

Ponce trusts her petition will lead to a favourable outcome. “We are asking for opportunities for women, we want something to be done,” she insisted.

Emilio Godoy is a Mexico-based freelance journalist who covers the environment, human rights, energy and sustainable development issues. This article has been translated from Spanish.