books Write on: The History and Uncertainly of Writing

Contrary to a too-commonly held assumption, book author Anne Trubeck argues that while writing by hand will likely become less practiced, it will not disappear, but evolve, as she insists its variegated world history amply shows. Just one possible precedent: the metamorphosis of letterpress printing into an artisanal form. 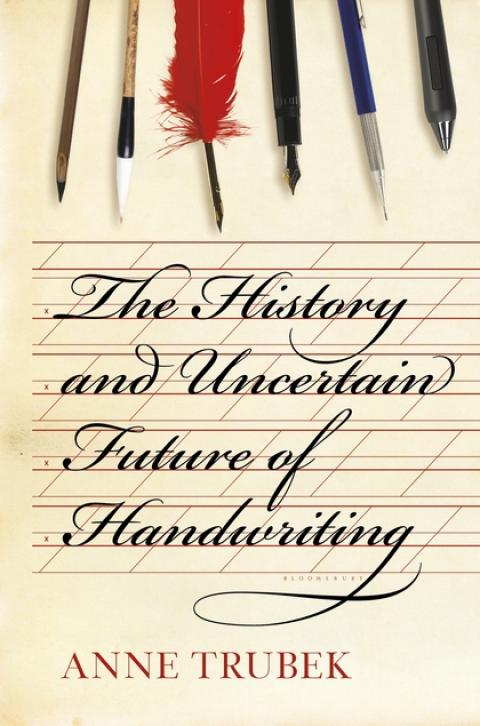 . , Bloomsbury Publishing
The History and Uncertainty of Writing
By Anne Trubeck
Bloomsbury USA; 192 pages
Hardbound:    $26.00; E-book:    $17.99
September 6, 2016
ISBN: 9781620402153
E-book, ISBN: 9782620402160, $17.99
In late spring, I had to endorse a number of legal documents using a digital rendering of my name in a cursive script, chosen from a a menu of simulated handwriting styles. It was like my signature, except legible. Beneath its surface, so to speak, was my identifying data -- confirmed by what the company producing the application calls “robust authentication methods.”

Indeed, if it were necessary to prove the authenticity of the “signature” in court, there is no question that the digital glyph could be verified rigorously, whereas a handwriting expert would be hard-pressed to find much uniformity between versions of the scrawl that I make on paper. The visible part of an electronic signature, with its imitation of penmanship, is just a formality. It accommodates our lingering sense that entering a binding legal obligation really ought to include the act of affirming one’s identity by one’s own hand. (With the whole hand, that is, not just the finger used to click “I accept.”) At this stage, the feeling is vestigial. Given another generation or two of kids who grow up knowing how to type before they can ride a bicycle, it could disappear entirely, and  the practice of writing by hand could become an antiquarian hobby, like churning your own butter or making horseshoes.

But not necessarily. Anne Trubek covers a great deal of interesting ground in The History and Uncertain Future of Handwriting  (Bloomsbury), though much of the comment it has received concerns the "uncertain future" part, in an elegaic mode. I found rather that many of the book's points are made most clearly at the start, when she discusses the earliest known system of writing, Sumerian cuneiform, which emerged around 3000 B.C.E. (Formerly an associate professor of rhetoric, composition and English at Oberlin College, Trubek is the founder of Belt magazine, devoted to urban life in the Rust Belt.)

Encouraged by a curator to pick up some cuneiform tablets for a closer look, Trubek is struck by how compact they are: roughly palm-sized, covered with tiny marks made on wet clay with a stylus. While the writing instruments were simple, mastering them was not: “The tip of the stylus was triangular, and turning it caused different slants and directions for the marks -- some went deeper than others , some went horizontally or vertically, and the bottom of the stylus would make a round mark -- each with a distinct meaning.” To develop competence required years of study at the edubba (the Sumerian word for school: literally, “tablet house”) and also, one assumes, regular offerings to Nabu, the god of scribes, wisdom and literature.

“By 1600 B.C.E.,” writes Trubek, “no Sumerian speakers were alive,” but it continued to be taught as a classical language, while cuneiform remained in use for another thousand years. For all its difficulty, cuneiform was easier to learn than the Egyptian writing system; it was relatively utilitarian (often used for business contracts and tax records), while hieroglyphics “were as much an art form as they were a means of information storage.” And clay tablets “continued to be used even after most people had shifted to papyrus.”

It is a lesson in the durable habits of the late adopter -- and a reminder that “the uncertain future of handwriting” (or of any other aspect of literacy) will not be decided by the automatic workings of progress and obsolescence.

As she roams across the centuries, Trubek points out two or three factors that have largely set the terms for the development of handwriting, quite apart from the qualities of the tools we use. One, of course, is that only a small a fraction of the population has been able to acquire the skill throughout most of history. In addition, people who could read did not always learn to write, as the skill was difficult and slow to master. Finally, people in authority have long tried to impose norms on how words should appear on the page. Charlemagne in the ninth century might not have otherwise have much resembled American schoolteachers in the 20th century, but they shared a passion for standardized penmanship.

It’s easy to see how these three difficult realities -- widespread illiteracy, tortuous pedagogy, and the demand for uniformity -- would tend to reinforce one another. Trubek’s story is in part one of rapid changes followed by stubborn inertia. One side-effect of Gutenberg’s invention of the printing press was that, in putting scribes out of work, many were compelled to take up a new career: they became writing instructors. That can only have encouraged more efficient pedagogy -- and with it a broadening and deepening of the pool of those people able to write, as well as read, more books.

But the drive to standardize and to reinforce social hierarchy seems, if anything, to have intensified: handwriting became an index of status, rank and moral uprightness. A 17th-century writing manual recommended a particular script for women, “for as much as they (having not the patience to take any great paines, besides phantasticiall and humorsome) must be taught that which they may instantly learn.” Immigrants who practiced the Palmer Method -- one of the predominant forms of handwriting instruction available a hundred years ago -- would be more readily assimilated under its “powerful hygienic effect.” Good penmanship — for a purer America!

The invention of the typewriter was one giant leap for standardization, and Trubek quotes one researcher’s conclusion that “familiarity with the typewriter makes students better penmen, not worse.” But it also provoked worries that teachers were neglecting handwriting instruction. In time, “the universal typewriter may swallow all.”

It didn’t, of course. What actually happened (and this is one of the most striking points in a book full of them) was that another attitude towards handwriting came into focus: a sense of it being like one’s fingerprints, with distinct qualities visible only to the trained eye. Graphologists make the still larger claim that handwriting analysis can reveal aspects of the personality. Because graphology ranks somewhere between dowsing and astrology in scientific rigor, I had assumed its origins were lost in the mists of antiquity. But it turns out the idea took shape no later than the 17th century, with efforts to systematize it really getting underway only in the 19th century, amidst worries about individuality being crushed by the march of progress.

Trubek’s history of handwriting is a story of metamorphosis, not of decline. Given my experience with “signing” digital documents a few months ago, I was interested and amused to learn it was a variation on a theme: A century or so back, one manufacturer “marketed -- unsuccessfully, it seems -- a typewriter whose letter keys were formed from handwriting of the buyer.” If the future of handwriting is uncertain, that’s in part because no one can tell what uses and meanings we may find for it yet.