The results of the strike won’t be known for days or weeks, said Azzurra Crispino, the media co-chair for the Incarcerated Workers Organizing Committee. “By withdrawing from participation in their work, they believe it’s the best way to have an impact on the prison industrial complex,” she said. “This is not a one-day strike. the solutions to this problem are going to require at the very least a constitutional amendment change to be effective.” 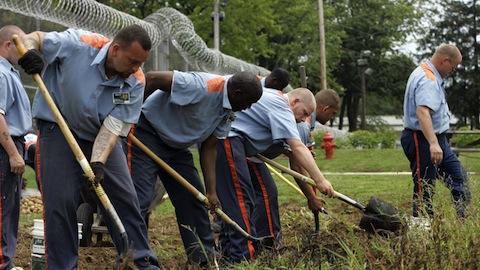 Why Prisoners Nationwide are Striking

Prisons can’t run without inmates, in more ways than one. Prisoners wash floors, work in the laundries and kitchens, and provide a large amount of the labor that keeps their facilities running. In return, they earn pennies per hour or even no pay at all.

That’s sparking what may be the largest prison strike yet as inmates across the country plan to stop working on Friday. The strikers are calling for an end to forced labor and what they call “prison slavery.”

It’s no coincidence that they picked Sept. 9 as the strike date: It’s the 45th anniversary of the Attica riot, when prisoners at the Attica Correctional Facility in New York rioted for better conditions.

The strike comes amid increased interest from lawmakers and the public in prison reform, as well as several nonviolent prison protests designed to draw attention to labor conditions, such as a 2014 work stoppage in Alabama prisons. The organizers frame the issue as slave labor because the 13th Amendment, which outlawed slavery in 1865, includes one exception: for people who are “duly convicted” of a crime.

“That’s why none of these protections, such as worker protections, apply to prisoners,” said Alex Friedmann, the managing editor of Prison Legal News and the associate director of the Human Rights Defense Center. “So under the 13th Amendment, they’re basically worked as slaves, and if they don’t work, they’re punished.”

Friedmann has personal experience with prison labor because he worked behind bars while he served his own prison term. His jobs ranged from working for the prison newspaper to screening T-shirts, including one that was a tie-in for a Batman movie. Most prison jobs, he noted, are designed to keep the facility running, rather than work that’s outsourced to private corporations.

The results of the strike won’t be known for days or weeks, said Azzurra Crispino, the media co-chair for the Incarcerated Workers Organizing Committee. “By withdrawing from participation in their work, they believe it’s the best way to have an impact on the prison industrial complex,” she said. “This is not a one-day strike. the solutions to this problem are going to require at the very least a constitutional amendment change to be effective.”

A riot erupted at a Florida prison on Wednesday, with the Miami Herald reporting that some officials were concerned the disturbance might foretell more problems as the strike unfolds.

Pay within prisons ranges from as low as roughly 15 cents an hour up to federal minimum wage of $7.25 an hour, although about half that pay is deducted before prisoners see it. Most jobs are low-paid positions that keep the prison running. The higher-paid ones are outsourced from private corporations -- such as prisoners sewing lingerie for Victoria’s Secret -- and are sought after by inmates, Friedmann noted.

Some states provide no guaranteed pay for prisoners. The minimum wage for Georgia and Texas prisoners is zero. Aside from the low or nonexistent pay, the strikers say they object to the use of violence or punishments if they don’t perform as well as their jailers expect.

“Overseers watch over our every move, and if we do not perform our appointed tasks to their liking, we are punished,” said a statement from the Incarcerated Workers Organizing Committee. “They may have replaced the whip with pepper spray, but many of the other torments remain: isolation, restraint positions, stripping off our clothes and investigating our bodies as though we are animals.”

Americans are increasingly aware of prison conditions, thanks to shows like “Orange Is the New Black.” At the same time, the prison population has surged during the past several decades. The incarceration rate has surged fourfold since the mid-20th century, according to “The Growth of Incarceration in the United States,” a book published by the National Academies Press. With more people behind bars, it’s increasingly likely that Americans know someone -- a friend, a colleague, a family member -- who has served time in prison.

Yet that doesn’t mean the Americans or lawmakers may be open to providing prisoners with higher wages. For one, the money would come out of federal or state budgets, which could mean cuts elsewhere. And politicians may not want to be perceived as being soft on convicted criminals.

The outcome of Friday’s work stoppage likely won’t be clear for some time. It’s possible that some prisons will order a lockdown to prevent a strike within their facility, Friedmann noted.

“Things move at a glacial pace,” he said, adding that his prediction is for more activism among prisoners: “This isn’t the end. It’s probably the beginning.”

On Friday (Sept. 9) prison inmates across the US will participate in what organizers are touting as the “largest prison strike in history,” stopping work in protest of what many call a modern version of slavery.

The protest, organized across 24 states, is spearheaded by the inmate-led Free Alabama Movement (FAM) and coordinated by the Incarcerated Workers Organizing Committee (IWOC), a branch of an international labor union. Its manifesto, published online by “prisoners across the United States,” reads:

This is a call to end slavery in America…To every prisoner in every state and federal institution across this land, we call on you to stop being a slave, to let the crops rot in the plantation fields, to go on strike and cease reproducing the institutions of your confinement.

The strike will be held on the 45th anniversary of the Attica prison revolt, when prisoners took control of a maximum-security correctional facility near Buffalo, New York, demanding better conditions and an end to their brutal treatment.

Today, nearly 900,000 US prisoners work while incarcerated. The Bureau of Prisons, which oversees all federal inmates requires that all prisoners (barring medical reasons) work. State prisoners are in the same boat; according to Eric Fink, a professor at Elon Law school, in all or nearly all US states prisoners must work. If they refuse, they can be punished with solitary confinement, revoking visitation, or other measures.

Inmates receive very little pay for their labor—in federal prisons it ranges from $0.12 to $0.40 an hour. In some states, like Texas, those held at state prisons receive zero compensation. The majority of inmates work on prison maintenance and upkeep—cleaning, cooking, etc.—but approximately 80,000 do work for the outside world. Sometimes these jobs are the result of government contracts; other times, prisoners end up doing work for private companies such as Victoria’s Secret, Whole Foods or Walmart.

Unlike other American workers, these prisoners are not protected by labor laws. They don’t have access to worker’s compensation, they get payed well below the minimum wage, and they cannot effectively form unions. Courts have ruled that because the relationship between prisons and inmates is not that of an employer and a worker, inmates don’t get these labor protections.

According to The Nation, there is a faction among the organizers that would rather see prison labor abolished, but IWOC is pushing for inmates to unionize. “Prisoners are the most exploited labor class in this country,” says Azzurra Crispino, spokesperson for the organization.

The moral case to let prisoners unionize and have the protections given to civilian workers is straightforward: forcing people to work is inhumane, as are the ridiculously low wages and often the labor conditions themselves.

The economic case is much more complex. Prisons argue that paying inmates a minimum wage would bankrupt them—in fact, Alex Friedmann, an editor for Prison Legal News told The American Prospect that the criminal justice system would collapse without exploiting inmates. But prisons don’t exist in a bubble, their effects ripple across society. While economists have argued that prison labor in general has little potential to significantly add to the GDP, there are longer-term and broader effects to consider.

Higher wages can help not only inmates, but their dependents in the outside world, who might avoid ending up on welfare having greater support. Cheap inmate labor may save money for prisons or corporations, but meaningful, decently-paid employment and job training could reduce recidivism and future crime. Ultimately, it’s the taxpayers who pay for most of the criminal justice system, and that means they are subsidizing cheap labor for big corporations instead of investing in reducing crime in the future.

In addition to putting pressure on individual institutions, strike organizers are hoping to raise awareness among the public.

“Nothing is preventing employers from paying prisoners a decent wage and offering benefits and after 300 years it’s pretty clear it isn’t going to happen on its own. No more than slavery was ended in this country because slave owners got enlightened,” said Paul Wright, editor of Prison Legal News and prisoner rights advocate. “Alas, there is no General Sherman coming to rescue and liberate America’s prison slaves.”