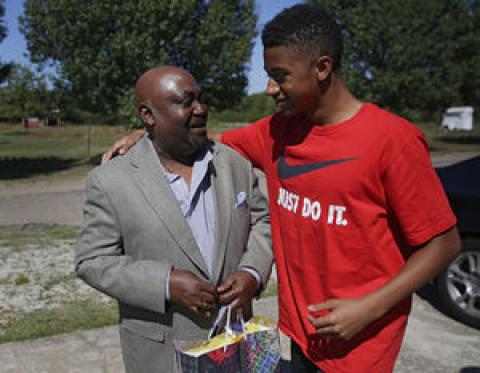 OKLAHOMA CITY - In response to the release of two videos depicting the murder of Terence Crutcher (seen here via The Tulsa World website), an unarmed Black Tulsan whose car had broken down, and the launch of DOJ and state investigations, the ACLU of Oklahoma released the following statements:

“A Tulsa Police officer murdered Terence Crutcher in cold blood. Each of the officers present were complicit in the unconscionable, reprehensible, and disgusting killing of this unarmed, defenseless man, by allowing him to bleed to death on the street rather than attempting any immediate medical aid or attention. These Tulsa Police Department officers have made it abundantly clear how little regard they have for Tulsa’s communities of color. By shooting a defenseless Black man and then shirking their legal and moral obligation to render aid as he lay dying in the street, these TPD officers clearly could not care less about whether the Black citizens they are sworn to protect live or die.

“We call today on law enforcement officers and law enforcement agencies around the state and around the nation to condemn the murderous actions of the Tulsa Police Department. In a world where our government continues to prove how little regard it has for the lives and the dignity of Black Americans, to remain silent is to be complicit. It is well past time for the good men and women who serve their communities faithfully to speak out, and condemn this murder of a defenseless Black man.”

“These videos prove that the Tulsa Police Department’s initial claim that Terence Crutcher was refusing to put his hands in the air was a boldfaced lie, as were TPD’s statements about his transport and death at a local hospital. The videos are clear—Terence had his hands in the air, and posed no threat to those present—right up until one of the officers gunned him down, and then her four companions watched him bleed to death in the street, making no attempt to render aid.

“As Terence’s family and community plead for peaceful protests and level heads, today’s promise of an independent federal investigation perhaps will bring some hope for peaceful resolution to a community that has been brutally betrayed by the people sworn to protect it. If this killing is investigated competently and fairly, I believe we will see murder or manslaughter charges against the shooter, and hopefully accessory charges against the officers who treated Terence Crutcher like a piece of meat rather than a human being. Their actions were immoral, reprehensible, and outright criminal. Putting Terence’s killer and her companions behind bars won’t bring Terrence back, but it is a necessary part of repairing the broken bond between police and communities of color, a rift that continues to claim lives.”

For information about the ACLU of Oklahoma, go to:
http://acluok.org/

This statement is available here:
http://acluok.org/2016/09/aclu-of-oklahoma-calls-for-criminal-charges-against-tpd-officers-in-murder-of-terence-crutcher/

The American Civil Liberties Union (ACLU) conserves America's original civic values working in courts, legislatures and communities to defend and preserve the individual rights and liberties guaranteed to every person in the United States by the Constitution and the Bill of Rights.