On August 6 – Hiroshima Day – I participated in a groundbreaking event at the South African Museum in Cape Town entitled The Missing Link: Peace and Security Surrounding Uranium. 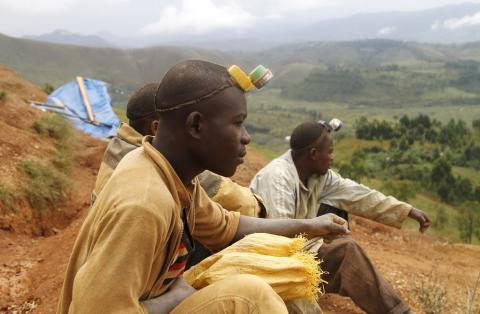 Artisanal miners at an illegal mine pit in the DRC. At severe risk to their health, some still go to abandoned sites to dig out uranium and cobalt. , Reuters/Kenny Katombe

The event had been organised by the Congolese Civil Society of South Africa to put a spotlight on the link between Japan and the Democratic Republic of Congo (DRC): that the uranium used to build the atomic bomb dropped on Hiroshima came from the Shinkolobwe mine in the province of Katanga.

This was the richest uranium in the world. Its ore had an average of 65% uranium oxide compared with American or Canadian ore, which contained less than 1%.

The mine is now closed, but its existence put it at the centre of the Manhattan Project in the second world war. The Congo was a Belgian colony at the time and the Congolese suffered from the harsh colonial reality of racism, segregation and extreme inequities.

Following the war, the mine became a focus for the Cold War conflict between the superpowers. Today, freelance miners, desperate to earn a living and at severe risk to their health, still go to the site to dig out uranium and cobalt.

US efforts to secure all the uranium

The Congolese Civil Society of South Africa seeks to bring together the DRC community living in the Cape Town area.

In February this year it presented a memorandum to the South African parliament, asking for support for human rights and democracy in DRC. The organisers believe the uniqueness of Shinkolobwe’s ore has had a destructive impact on their history.

It held its first Missing Link event last year at the University of Cape Town. The second event was much more ambitious. The lecture hall at the museum was packed with Congolese, including families with children, and other members of the public. A number of people hailed from the area around Likasi, the nearest town to Shinkolobwe. Posters were put on the walls, including the flags of Japan and DRC, next to each other.

I had been invited to the event because my new book, Spies in the Congo, centres on America’s efforts to secure all the uranium in the Belgian Congo. This followed Einstein’s warning of the risk that Nazi Germany was building an atomic bomb.

The US arranged for its wartime intelligence agency, the Office of Strategic Services, to send agents to the Congo to protect the transit of the ore and to prevent smuggling to Germany.

The story of these courageous agents – and the dangers they encountered from Nazi sympathisers in the mining multinationals and the Belgian colonial administration – has been secret until now.

Haunted by the ghost of Hiroshima

Also secret, for many long years, was the reliance of the American atomic project on Congolese ore. Following Hiroshima, a statement by British Prime Minister Winston Churchill drew attention to the “indispensable raw material for the project” provided by Canada. He made no mention of the Congo.

The impact on DRC has been largely invisible to the wider world. But in the local community, it was fully apparent. Oliver Tshinyoka, a journalist in the Congolese Civil Society of South Africa, grew up close to Shinkolobwe.

He describes as a deserted place where vegetation blankets empty homes. His profound words end my book:

Shinkolobwe has never been commemorated. The town is dead and is haunted by the ghost of Hiroshima.

There was little in the way of health and safety precautions. Speakers at the Missing Link event told of the deformities and illness caused by working in the mine and living near it. Sylvie Bambemba Mwela spoke with pain of her grandfather, who had been poisoned by radiation and had a piece of brain coming out of his mouth.

People nodded in vigorous assent to the statement that when a miner went near a television, he caused severe interference with reception. There were sad references to genetically inherited malformations.

Poems had been written for the event, including Shinkolobwe’s Tear by 14-year-old Benina Mombilo. She quietly told a spellbound audience:

When the predator took Africa’s mines, he left behind death, poverty, conflict and war.

Christian Sita Mampuya observed thoughtfully that none of the people living in the Likasi area had been consulted on why the uranium was mined. Nor, he added, are there any records available about the impact on DRC of the exposure to radiation over the last seven decades.

The power of knowing the past

Léonard Mulunda, a trenchant political analyst, insisted firmly that the Congolese must take responsibility for themselves, for their own welfare and government. But he noted that DRC’s lack of information about its past makes it difficult for the Congolese to plan for the present and the future. For this reason, he emphasised the significance and value of the Missing Link event.

Its importance was also highlighted this month in the US by Akiko Mikamo, the author of Rising from the Ashes, whose father Shinji Mikamo is one of the Hibakusha, who are the survivors of Hiroshima.

Last year, the Institute of Commonwealth Studies and the United Nations Association Westminster Branch invited Akiko Mikamo to give a keynote speech at a conference at the School of Advanced Study on nuclear politics and the historical record. Here she learned about the Congo-Hiroshima link for the first time. She explained:

None of the Hiroshima and Nagasaki survivors I was in contact with had any knowledge of it.

Mikamo contends that it is very important:

… that we learn also about the people and regions that are not widely known or “big players” in history textbooks. But those people’s lives have been significantly affected, and it has serious implications for our global society’s future.

This global connection came full circle at Cape Town’s Missing Link event, where warm and appreciative references were made to Mikamo’s work.

The sufferings generated from Congo’s uranium featured in the singing and dancing during the interval. One song was entitled La peine et la generation suivante de Shinkolobwe.

A deeply moving contribution was a poem entitled A Bomb Fashioned out of Dirt, which was delivered with great power by Beauty Gloria Kalenga and brought tears to many of our eyes. This dirt, she said, using another name for the mine and playing on its meaning, was “a fruit that scalds known as Shikolombwe”.

The question period was a time of dignified and respectful dialogue, when many engaged with the issues faced by DRC at this moment, especially in relation to the presidency of Joseph Kabila.

Some argued Shinkolobwe’s miners and their families should be compensated by the Belgian and US governments. There was consensus, however, that compensation should be postponed until there are mechanisms to ensure it is received by the victims.

The Missing Link event was a searching and constructive examination of the past and its relationship to the present. It seemed to me to exemplify the value of public engagement at its best, where everyone listens and interacts and benefits together.

Isaiah Mombilo, speaking on behalf of the Congolese Civil Society of South Africa, said he was proud that DRC’s role in the history of the world was witnessed so successfully on Hiroshima Day in Cape Town this month. It was a way, he believed, of “claiming Shinkolobwe’s tears”. But this, he added, was only the beginning:

There is more to say.