Moderators Note: This Portside Labor moderator does not agree with the following proposal by Andy Stern and Eli Lehrer. I do believe that the left in the labor movement needs to know what schemes conservatives are proposing, especially when it comes from a former "labor leader". 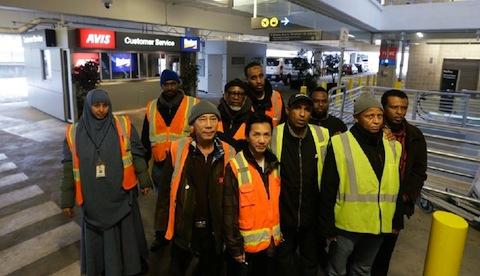 Few relationships in America suffer as unnecessarily thanks to federal government morass as that between employer and employee., AP Photo/Ted S. Warren, file

Few relationships in America suffer as unnecessarily thanks to federal government morass as that between employer and employee. In fact, the fundamental structure of labor relations has changed rather little since the Taft-Hartley Act (1947). Political leaders drafted these laws to deal with a world of assembly-line manufacturing jobs, hard physical labor and vastly larger private-sector unions. As the world of work has changed in myriad ways over the past half-century, the laws are showing their age in ways that nobody likes.

Current proposals to make significant, nationwide changes to federal labor laws have almost no chance to be signed into law. And indeed, recently the focus has shifted instead to the state and local level. In some states, lawmakers sympathetic to business owners are enacting "paycheck-protection" laws aimed to limit unions' political activity, along with new right-to-work laws and independent contractor laws. For their part, unions are successfully pushing for a $15 minimum wage, mandatory paid family leave and "fair workweek" legislation that limits employer flexibility in deciding hours.

Rather than waiting for Congress to act, federal lawmakers should encourage even more of these local efforts to bloom. It could do this simply by authorizing waivers from federal labor laws, similar to those granted under sections 1115 and 1119 of the Social Security Act, which allow state experiments with Medicaid, Medicare and other benefits programs. In effect, Congress would be clearing the way for wide-ranging experiments with new business models, responsibilities and roles for unions, employers, government and workers alike.

Labor organizations and their representatives currently face criminal charges under federal law if they receive money or anything of value from employers, even for legitimate business services that an employer could buy in the market. With waivers, they are free to try new forms of non-collective bargaining and allowed to legally "unbundle" their services, offering everything from group insurance and training to grievance-handling procedures on an a la carte basis. Groups such as the National Rifle Association and AARP already do this. Unions should be able to do so, as well.

As with the Social Security Act waivers, states that seek an exception from federal rules would have to demonstrate the waivers meet the stated legislative intentions of the laws in question. Proposals to carve out a waiver would be subject to public-comment periods and stakeholder engagement; would face time limits; and would have to be budget-neutral from the federal government's perspective. Widely supported waivers should also get faster approval. Beyond those requirements, states, unions, firms and localities should usually get clearance to do what they want.

What they want could include allowing unions and managers to form joint-management committees or works councils, similar to those seen in Japan and much of Northern Europe. Experiments to replace "overtime" (including the administration's new rules) with "flextime" and could also be part of the mix. Broader waivers might give unions and other workers' organizations a central role in administering unemployment and social-assistance programs under an American version of the European Ghent system. More ambitious waivers could even facilitate broad market-based benefit systems or regional agreements that set wage and hour standards for entire industries.

While those in charge in Washington obviously will bring their own values and ideological predilections to bear, recent developments are heartening, most visibly the Obama administration's Department of Health and Human Services cooperation with Indiana Gov. Mike Pence, the current GOP vice presidential nominee, to rethink that state's Medicaid program along more market-oriented lines.

Providing a better future for American workers means we should allow states, localities, workers and businesses to embark on an ongoing program of bold experimentation. Our federal labor laws are badly out-of-date and waivers can help to fix them.

Andrew Stern is former president of Service Employees International Union and a senior fellow at Columbia University. Eli Lehrer is president of the R Street Institute, a conservative think tank based in Washington, D.C. Thinking of submitting an op-ed to the Washington Examiner? Be sure to read our guidelines on submissions.