To flee from a war zone, only to be met with a fatal police bullet on the other side of the world: It's an uncomfortable, truncated narrative of an abbreviated life. This was how Alfred Olango's life concluded late last month, at the intersection of many forces of violence that converged at a San Diego suburb, in a scene that braided strands of war, policing, race and migration. 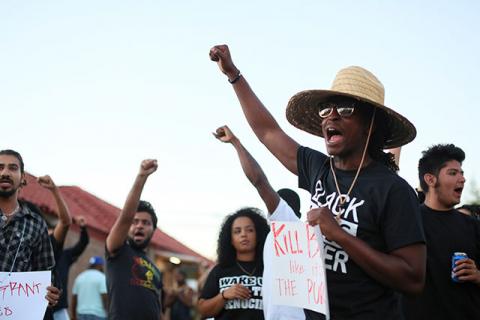 Activists protest on September 30, 2016, in El Cajon, California, in the wake of the killing of Ugandan refugee Alfred Olango by a police officer.,Sandy Huffaker/The New York Times

A diasporic history caught up to him in the moment the police extinguished his life, but he had spent years in various states of escape. He was finally ensnared by a system of state violence, becoming yet another Black man killed by the police in the US, after having braved and survived a harrowing global journey as a refugee.

Yet, that narrative got flattened in the snatches of shaky video and clinical police reports that followed his death. As Olango lay on the pavement in a parking lot, he was viewed by many as more of a statistic than a human, another casualty of the police, and another child of war. His killing has stoked the fiery wave of Black Lives Matter protests across the country, but the tinder of violence in his background remains shadowed.

Olango was shot after just seconds of interaction with the police. He was holding an e-cigarette, which police say they mistook for a gun. They shot him despite behavior signaling that he was in a mental health crisis at the time; this crisis was, in fact, the reason his sister had called for emergency help in the first place.

According to the police account, Quartz reports, "Olango removed an 'object' from his pocket, took a 'shooting stance,' and pointed towards one of the officers. Both police officers then struck Olango simultaneously: one with a Taser stun gun, the other shooting and killing him."

Olango was, according to those who knew him, a decent, kind, but troubled man. He also, of course, had troubles: He was a Ugandan refugee who had arrived in 1991, aged 14, after his family survived a vicious civil conflict, according to charity workers who knew his community in Gulu. The war still scars Uganda and continues to haunt survivors dispersed outside the country. Olango had a criminal record, the local news reports, though -- like many who live with mental health problems -- he had no formal record of psychological issues. It is unclear how all these factors intersected in his final breakdown, but as a Black migrant in America, Olango's life reflected both the oppression of circumstance and an undeserved fate.

"I called these people three times to come and help him," his sister said tearfully in a video of the aftermath. She told the police: "I just called for help and you came and killed him."

The act of calling for help, as a refugee and a Black person, is fraught, in and of itself. For survivors of conflict and trauma, the residue of past terror can be extraordinarily difficult to confront. Many may carry internally social anxiety, along with a justifiable wariness of authority, into their resettled lives. But the fears that pursue them in a "safe" new country can clash dangerously with very real social barriers. When mental health crisis strikes, immigrants can face major difficulties accessing clinically appropriate and culturally conscious care services. And around the world, unmet mental health needs pose a massive burden for refugees -- on top of the economic and social hardships they must already endure on their journey. Refugee children, such as the masses of terrorized children fleeing Syria today, are often described by humanitarian workers as deeply psychologically scarred, but they cannot even begin to heal when they are shut out of school, dislocated from their communities and living under siege.

Even after refugees make it to safer ground, those "invisible" wounds get buried and fester.

Did a trace of wartime trauma follow Olango into that parking lot? His family noted he did not have a "chronic" mental disorder but was having a breakdown at the time he was shot, as he was grieving the death of a friend. Whatever his psychological history, Olango's personal background made him extremely vulnerable to state violence, as an immigrant, a Black man, and someone facing a mental health crisis -- factors that are especially prone to brutal and deadly police encounters in recent months.

Black migrants are, compared to other immigrant groups, especially likely to be targeted for incarceration, law enforcement profiling, deportation and other brutal forms of state oppression, and many face cultural and social isolation. Although it's impossible to say how these cross-cutting tensions might have factored into Olango's final moments, they constantly haunt the lives of Black migrant communities.

Carl Lipscombe of the Black Alliance for Just Immigration says via email, "It's easy to look at this as another week, another Black life taken. But Alfred Olango's case really illustrates the ways in which both Black immigrants and those suffering from mental illness are criminalized by the state."

Though we don't know exactly what might have triggered Olango's breakdown, studies of refugee communities reveal that among people who have suffered deep trauma, prevalence of related mental health disorders can be as high as 45 or even 90 percent. Rates of traumatic psychological distress are acute among refugees from East Africa, many of whom have cycled through refugee camps and endured ferocious poverty, in addition to mass violence. These subsurface crises tie into social and cultural barriers besieging many refugee youth. (The Somali American community in the Twin Cities, for example, has faced massive tensions with law enforcement along with social alienation and deprivation linked to mental health issues.)

Something about Olango made the police perceive him as a threat. But Olango had faced threats of brutality and oppression throughout his life, whether in his homeland or the country that was supposed to offer him refuge.

Olango didn't have time to tell his whole story before he was silenced by a police officer's gun. As a child, he had a chance to flee a war-torn country. On the day he died, he never had a chance to even turn away before being shot down in an American suburb.

Perhaps that's why Olango's mother Pamela Benge turned to the enraged protesters with a compassionate plea: "I don't want war. If you have seen war, you will never, ever want to step near where there is war."

The intersection where Alfred Olango found himself that day in the parking lot seems beyond coincidence: war, migration, race and America's security state. Yet it was a horribly predictable collision course: a collision of traumas converged on a man's body as he held up his hand, and then fell. It was a scene from a front line that's all too recognizable to Black America, and a scene from a conflict zone that's devastatingly familiar to a refugee.

Michelle Chen is a contributing editor at In These Times and associate editor at CultureStrike. She is also a co-producer of "Asia Pacific Forum" on Pacifica's WBAI and Dissent Magazine's "Belabored" podcast, and studies history at the City University of New York Graduate Center. Follow her on Twitter: @meeshellchen.