More than 30,000 farm workers are being brought to Canada from the Caribbean, Mexico and South East Asia to do the jobs that no one wants to do, they are treated as sub-human and forced to return home, many times as injured bodies. 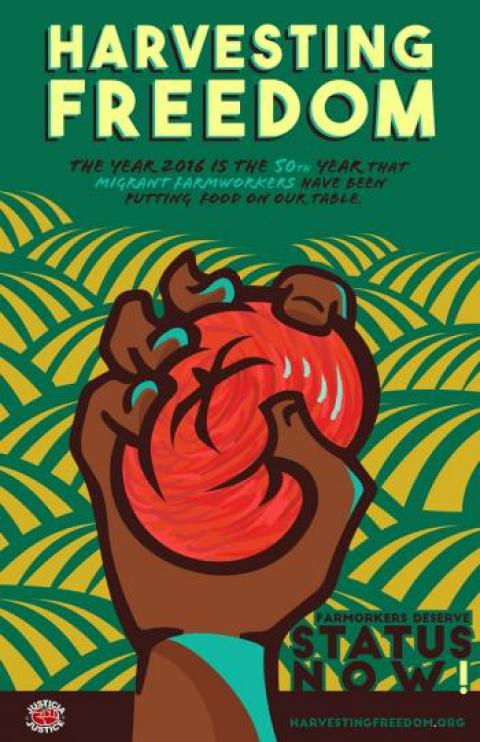 A historic caravan of migrant agricultural workers completed a 1,500 kilometer journey to Ottawa to deliver a clear and pointed message to Members of Parliament -- “We want permanent immigration status now!”

The caravan launched on Sept. 3 in Leamington, Ontario (Canada’s tomato capital) has made stops to cities and towns across southern Ontario. Workers have been sharing not only their demands, but personal stories of exploitation and injustice under Canada’s Seasonal Agricultural Worker Program (SAWP), a federal program now in its 50th year.

On Sunday morning in Toronto, community members and supporters welcomed the caravan with a rally at the Ontario Food Terminal, a place where the fruits of migrant labour are bought, sold and profited from.

To date, workers and communities have largely received the caravan with support, cheering and warmth from city to city. From one-on-one discussions, to town halls, forums and film screenings, the caravan and its workers have been shedding light on exploitative working conditions.

They have been engaging in conversations about why temporary migrant workers are good enough to work and stay in Canada, how they help feed us and our families -- while they leave their own families behind -- and do the work that most Canadians are unwilling to do under conditions most would never accept.

As part of Canada’s immigration framework, over 30,000 farm workers from areas of the Caribbean, Mexico and South East Asia work under the SAWP and other temporary immigration programs.

The list of basic worker and human right abuses they face in Canada is truly appalling. They are exempt from basic provincial employment standards, including minimum wage, holiday pay and hours of work. Their permits are tied to a single employer, they’re often forced to pay to live in deplorable housing conditions and have no access to collective representation. They endure racism and harassment and limited access to health care. Some workers are fired and sent back home when they become injured on the job, and threatened with deportation for raising workplace issues.

In some instances, workers succumb to fatal injuries while on the job, or their family and friends tell us that they died upon returning home. There have never been charges laid or a coroner’s inquest surrounding a migrant worker’s death -- which speaks, once again, to their lack of status and basic dignity.

These workers are at the mercy of their employer. In other words, it is indentured labour, giving this program the disrepute of being akin to “modern day slavery.”

While strengthening labour legislation and protections are critical first steps in ensuring healthy, safe, and dignified working conditions, it is only by granting immediate permanent immigration status that migrant workers can truly get access to all the necessary workplace protections and benefits that are mandatory in Canada.

This caravan is drawing attention to the deficiency in Canada’s immigration system. The current immigration policy framework, designed in the 1970s, was put in place to replace a former system, which had an explicit whites-only policy for immigration status. The hope was to put behind the nature and legacy of temporary status for people who were coming from countries of origin similar to the SAWP, such as the workers who worked on the Trans-Canada Railroad and other critical infrastructure built for Canada. Many of these workers were sent back because they were deemed unfit due to perceptions about their racial, linguistic or skills background. Rather than exploiting them and sending them back, we should have allowed them to stay and we have that chance today again with migrant workers already working here.

How do we want to recall our position in relation to this structural exploitation of people of color, as we move forward?

We cannot encourage and champion buying “local,” when purchasing local produce at our farmers markets or grocery stores is only a cop-out. Workers themselves are being brought in from other parts of the world to do the jobs that no one wants to do, they are treated as sub-human and forced to return home, many times as injured bodies.

There is nothing temporary about this program, as some workers have been working in them for as long as 25 or 30 years.  We have to do better. We have to call on Immigration Minister John McCallum and Minister of Employment MaryAnn Mihychuk to introduce legislation which makes room for permanent status for all migrant workers.

Binish Ahmed is a Researcher and a Policy Studies PhD candidate at Ryerson University. Navjeet Sidhu is a Researcher at the Workers United Canada Council. Both Binish & Navjeet are members of the Harvesting Freedom Campaign in Toronto