tv The Tragedy of Vice Principals

The jokes in the HBO comedy may not be all that funny, but the show reveals something raw and authentic about public-school dynamics. 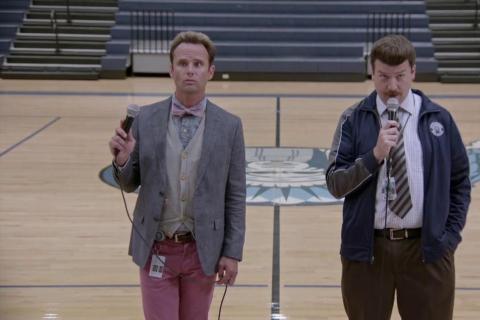 In the recently completed first season of Danny McBride’s HBO comedy Vice Principals—which received mixed, largely disappointing reviews—two vice principals compete to fill the shoes of a retiring principal played by Bill Murray.*
“It’s all about the students; it’s not about you two,” Murray admonishes his power-hungry underlings before disappearing to care for a sick wife. They ignore the warning, and the position goes to a capable but autocratic black educator from Philadelphia: Dr. Brown, as she makes sure she’s called. The gruff, bumbling disciplinarian Neal Gamby (McBride) and the dandy sociopath Lee Russell (Walton Goggins)—both of whom are white—join forces to torture the newcomer, who arrives at North Jackson High in South Carolina with a well-documented habit of both improving schools and firing ineffective vice principals.
Danny McBride projects aren’t known for subtlety, but Vice Principals, like many shows about education, addresses real issues that real educators face and captures familiar school clichés: talented teachers who are rough to deal with personally, bureaucratic messes with simple fixes, and policy trends that sweep in and out of schools as fast as graduating classes.
In the sixth episode, Russell manufactures a disappearance of textbooks along with evidence suggesting they were stolen by the prickly English-department head Ms. LeBlanc. Russell and Gamby warn Brown to avoid conflict: Gamby says that the English teacher “has union ties,” while Russell announces that she “runs the damn school.” They set up an archetypal face-off between entrenched teacher and newcomer administrator that Brown is destined to lose from the minute she interrupts LeBlanc’s class midway through her analysis of Cassio’s speech in Act II of Othello.
The principal should have taken Cassio’s ruined reputation to heart. LeBlanc questions whether a principal makes a difference in the lives of students—a sentiment often voiced in reality by teachers frustrated with administrative oversight—and she and Brown end up before the district’s school board in “conflict resolution.” The two vice principals deliver the books, and Brown is humiliated. In reality, while longtime teachers typically act with impunity, they seldom so delight in scoring points against new administrators, who, in turn, rarely instigate trouble with the teachers whose support they desire. Nonetheless, Vice Principals clearly understands school hierarchy. A name on the door of an office isn’t always synonymous with power.
Another episode riffs on restorative justice, a buzz phrase in education. Embracing it means eschewing suspensions and other punitive disciplinary measures that remove students from class and provide little opportunity for reconciliation. Suspending a chronically absent kid doesn’t help the kid’s academic chances; figuring out the cause and addressing it does. When Brown proclaims a new era of restorative justice at North Jackson High, she runs down Gamby’s stats: 183 detentions, 51 suspensions, and three expulsions. While the move toward restorative justice doesn’t have to be quite so sweeping in real life, Brown outright bans detentions, suspensions, and expulsions—"all the tools that there are to discipline people," moans Gamby, whom Brown accuses of having "negative energy." Instead, students at North Jackson High who are in trouble eat popcorn and sit on beanbag chairs in “The Circle Room.” In one session, a couple of boys embroiled in a rivalry over a girl spout tears; in another, to a captive audience, Gamby expounds on marijuana’s undocumented tendency to grow breasts in young men. Clearly, The Circle Room, like any site of purported healing, may host breakthroughs and absurdity in equal measure. It offers a good reminder that strategies that are laudable in theory do not, when put into action by a team of educators, always lead to satisfying outcomes in real life.
Vice Principals is consistently off-putting and, often, not particularly funny. Russell’s flashy wardrobe and cattiness come with a heavy wink about his closeted sexuality. Both vice principals make loaded cracks about Brown’s figure and are implicitly bitter about her role as their black, female boss. Gamby revenge-defecates in a fountain, Russell repeatedly drools mucus into Brown’s coffee, and both loudly employ the c-word in reference to their embattled foe and others they resent. Viewers are supposed to cringe and then laugh at the show’s audacity, and then cringe again upon recalling that they laughed.

I’ve been forced to do the Macarena, play charades, feed a co-worker breakfast by hand ... None of that made me a better teacher.

But the saga of Russell and Gamby has less to do with the campaign against Brown than with their campaign for status and the attendant improved self-esteem. They are mediocre, middle-aged white men whose longing to escape their rut leads them to revolting behavior. A bitter divorce and his ex’s genial new husband’s deepening connection with his daughter have fractured Gamby’s home and sense of his own power. Russell’s home life is characterized by shrieking bust-ups with his mother-in-law, as well as an implied romantic disinterest in his wife. Gamby and Russell believe they have a right to feel successful, but they don’t. They demand to be in charge of something, but they aren’t. Within minutes of watching, I concluded that the show was supposed to be quite sad.
Like the students he clumsily counsels, Gamby should address the roots of his suffering. He uses a Circle Room session as an opportunity to rant to wide-eyed and silent kids about "females who cheat" in a "world full of meanness." From his barren apartment to his desperate attempts to impress his daughter as she, inspired by her stepfather, pursues an interest in motocross, Gamby needs his own restoration of sorts.
Meanwhile, Russell’s mother-in-law renders him a prisoner in his own house. When he’s forced to confront his bodybuilding neighbor who blasts metal at intolerable levels and hurls slurs at his family (his wife and her mother are Korean), neither politeness nor the police help. The neighbor mocks and physically assaults him—and finally, Russell calls Gamby, who drives up, brimming with his own fury, and punches the man cold. Sometimes sniffing out the root cause of a behavior is pointless, the show seems to say. Some students, as Gamby tells Brown when defending his approach to discipline, just "have darkness in their hearts, and will never learn." And sometimes, the scene suggests, adults are no different.
On a pupil-free day of “teamwork exercises,” Brown addresses “the squabbles” she’s sparked, but there’s no staff enthusiasm for pep talks or the promised tacos. This is realistic. In my experience, good teachers like learning new skills but scoff when an entire day without students ends up dedicated to “team-building” or celebrating a convoluted plan for improving school culture. On such days, I’ve been forced to do the Macarena, play charades, feed a co-worker breakfast by hand, and participate in a basic-training-inspired obstacle course. None of that made me a better teacher, and none of it emboldened me to have more faith in administrators. All I could think about was how much I wanted to be grading papers or planning better lessons. In Vice Principals, the ice-breaker—a guessing game designed to “improve communication skills”—breaks no ice; it merely affirms the chill between characters. Ironically, Brown’s estranged husband—a philanderer desperate to see his kids (who behave terribly and always seem to be wearing their private-school uniforms)—shows up and pleads his case via loudspeaker. By the end of the episode, Brown appears headed toward an ill-advised romantic reunion. Her husband’s presence does break the ice and helps staff members, if their applause can be construed as sincere, see their principal in a more human light. Yet, in revealing Brown’s domestic struggles, the moment also affirms a suspected thesis of the show: These people can’t even run their own lives, much less a school.

Their viciousness, sadness, and yearning for power ... doesn’t feel all that silly.

In an early scene, when Gamby approaches teachers assembled in the cafeteria for lunch (before his tray ends up spilling its contents over his head), he resembles an unpopular student seeking dining companions. Whispering and giggling, in their contempt, they’re as unabashed as adolescents. On a field trip, the same staff members cut him out of dinner plans. In real schools, the divisions may be less sharply drawn, but the effect is the same: Some people are in, and some are out—with administrators, department leaders, and students. Educators are supposed to help immature, irresponsible students grow into mature, empathetic adults—but Vice Principals seems to suggest that they suffer from the ailments themselves.
High school isn’t an incidental setting for this lowbrow sorta-comedy about middle-aged men responding very poorly to existential turmoil. South Carolina is a state with a routinely savaged education system. Most of the characters employed at North Jackson High demonstrate the kind of blithe incompetence that inflames charter-school founders and opponents of teacher’s unions. And whether or not it intends to, the show offers commentary on the state of public education: Here, untalented people can at least become middle managers that revel in petty beefs and care more about job security, individual autonomy, and popularity than they do the students they’re expected to prioritize. A February 2016 story in U.S. News and World Report suggests that education may be the key factor in improving socioeconomic outcomes for American citizens. Yet, according to a recent PDK poll, only one-fourth of Americans give American public schools a grade of A or B. The stakes are high, and yet the product, one might conclude, dissatisfies. Perhaps an edge of realism accompanies the ironic gesture of making a school (ideally, the site of burgeoning talent and ambition) the stage for showcasing thwarted hopes and stunted development.
In July, I had coffee with a high-school friend, an elementary-school counselor formerly employed in film and television. “I’m writing a script for a show about education,” he told me. “A serious one, not like Vice Principals,” he added. His script is good, and quite serious. But I’m not sure he was right about Vice Principals. In its portrayal of two ugly educators, their viciousness, sadness, and yearning for power (even over a small, underfunded fiefdom) the show doesn’t feel all that silly.
* This article originally mischaracterized the critical reception of Vice Principals as overwhelmingly negative. We regret the error.
ANDREW SIMMONS is a writer, teacher, and musician based in California. He has written for The New York Times, Slate, and The Believer.
Subscribe to Portside